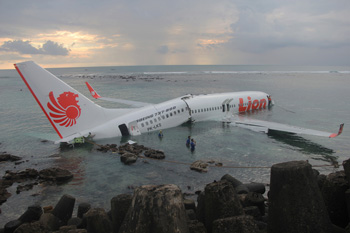 Unlike the previous two years, the worldwide commercial jet accident rate did not achieve a record low point in 2013, but it was still an excellent year for aviation safety. The 2013 commercial jet major accident rate was 0.24 accidents per million departures, which is up from 2012’s record rate of 0.14, but below 2011’s then-record rate of 0.28. The 2013 rate is the second-lowest rate ever recorded.

Unfortunately, there were two commercial jet upset aircraft accidents in 2013, the first in two years, and the return of controlled flight into terrain (CFIT) accidents continued. Four of the seven commercial major jet accidents were CFIT accidents.

Commercial turboprops also regressed slightly from their 2012 record low point in terms of number of accidents for the year. CFIT accidents again dominated the turboprop fatality numbers. Business jets had eight major accidents in 2013, an improvement from their 2012 total of 13.

Table 2 shows the major accidents that occurred in 2013 for all scheduled and unscheduled passenger and cargo operations for Western-built and Eastern-built commercial jet aircraft. Five of the seven accidents happened during the approach and landing phase of flight. As mentioned, four of the seven were CFIT accidents, and there were two upset aircraft accidents.

Figure 2 shows the commercial jet major accident rates and the five-year running average. This rate is only for Western-built jets because, even though we know the number of major accidents for Eastern-built jets, we do not have reliable worldwide exposure data (hours flown or departures) to calculate valid accident rates. After a decade of negligible improvement in the accident rate for commercial jets, a very positive trend of improvement that started in 2011 is evident, and the five-year running average continues to decrease.

The classification term major accident was introduced in 2006 by Flight Safety Foundation and means that any of the following conditions are met:

These criteria ensure that an accident classification is not determined by an aircraft’s age or its insurance coverage, and they give a more consistent and accurate picture of consequential accidents.