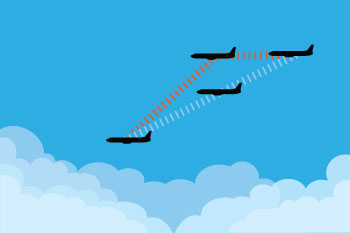 Results of data analysis, voluntary safety reporting and stakeholder collaboration prompted an official of the U.S. Federal Aviation Administration’s (FAA’s) Air Traffic Organization (ATO) to conclude in June that “the future is bright” for further reducing altitude deviations in the National Airspace System. Solutions will hinge on joint efforts by agency safety specialists and their counterparts in the aviation industry, a partnership enabled by the ATO safety management system (SMS) framework that protects information sharing and builds trust, he told the Airborne Conflict Safety Forum, held in Brussels, Belgium (ASW, 9/14).1

Joseph Teixeira, the ATO’s vice president of safety and technical training, said, “For the past decade, altitude deviations [have] been the single largest reported item by those voluntary safety programs that pilots [use to] report, so it is a big issue in the United States. We’re no strangers to altitude deviations. … We have robust programs that incentivize pilots to report. … [Even] the contributing factors for these have contributing factors — dozens, maybe more than dozens. Trying to fix this problem requires a diverse approach. … As we measure these events, we see a huge decrease in their occurrence in the United States but ‘huge decrease’ … means we still have hundreds of them, so there’s a lot of work left to do.”2

The ATO leaders’ thought process has been simple, however, he said. The first principle is to “fix what we can fix.” The second is that the earliest, best and most effective solutions and behavioral changes emerge from empowering local professionals — in both government and industry — to solve problems as they arise. The third is to tap into as many data sources as possible, conduct an appropriate level of data analysis for each issue, and then count on the overall process to yield positive results.

“We’ve aligned a lot of our programs around those three principles — from occurrence reporting to voluntary reporting, quality control, partnership at the local level. … We give particular emphasis to those programs that partner either with pilots or with controllers ‘where they live.’ … Changing what’s happening in the operation is what’s actually going to get you better metrics,” Teixeira told the forum. “We will continue to focus on ‘What can we fix today, tomorrow and the day after?’ That’s how we’re managing this situation.”

Under the ATO’s three-year-old Partnership for Safety program, every air traffic control (ATC) terminal and en route facility maintains a local safety council, made up of front line personnel and management, to identify and solve local safety issues such as altitude deviations. About 19 airlines also now participate on the program’s national risk panel. In 2012, the panel rated altitude deviations as a major contributor to high-risk events (Table 1), he said. At the agencywide level, altitude deviations still are addressed in various ways as “Top 5 Interventions.”

“The risk panel … came up [initially] with contributing factors that weren’t all-inclusive of … things we knew in the other programs,” Teixeira said, noting the role of subsequent evolution of SMS processes and capabilities. “We’ve created voluntary reporting programs3 that give partial immunity to controllers to report anything they want.

“Well over 80 percent of our controllers have, at one time or another, participated in this program in the past five years. … We get about 18,000 to 20,000 reports per year, and … we have [received] over 72,000 reports [and] catalogued well over 200 corrections of local procedures. It is a wealth of information — the kind of information that [we] need to target those things that really need to get fixed.”

The airline pilot community benefits from a complementary form of online report exchanges — called the Confidential Information Share Program — also enabling participation in risk-reduction efforts related to altitude deviation. “[The ATO and pilots] exchange information — pretty much fully identified — so that we actually can do good analysis,” he said.

One of the most productive tactics for resolving causes of altitude deviations has been providing opportunities for pilots and controllers to simply meet in the same room.

“Sharing information [from] the pilot’s view of an event and the controller’s view of an event … produces solutions that neither side had anticipated,” he said. “Finally, [pilots feel they] have somebody that they can talk to and get resolution to the things they didn’t know were occurring. And we have the same situation for controllers. [Controllers] finally get to understand why [pilots] did what they did,” he said.

The complexity of required navigation performance–area navigation (RNP RNAV) procedures has been among the most significant factors contributing to altitude deviations in recent years, Teixeira said. The ATO services 20,000 procedures overall and, in each of the past few years, has introduced at least 500 new RNAV procedures.

“A lot of those procedures are extremely complex, designed for avionics, and many of the aircraft cannot, on their own, follow those waypoints for a variety of reasons,” he said. “Older aircraft have extremely limited capability, and count on the pilot to actually manage that procedure along with the avionics. [Another] problem is there hasn’t been a complete resolution of what’s on the chart [versus] controllers’ training and controllers’ procedures. So, for example, a controller may be expecting someone at 10,000 ft, but the chart will say ‘cross between 8,000 and 10,000,’ giving the pilot that discretion.”

Some flight crews involved in altitude deviations have reported that route names had confused them. Others reported that they did not realize that their aircraft actually was not performing at the level of precision required by the performance-based navigation procedure.

“We really need them at 10,000 ft — not 9,000 or 9,800 ft — creating huge difficulties,” Teixeira said. “We also know that, on many occasions, airlines had not updated their charts. So we have new procedures with old charts, and it creates this problem. Hundreds of events are associated with these chart issues.”

“We have four-letter and four-number call signs, multiplying the [huge] problem,” he said, noting that many airlines’ marketing departments have been unwilling to change marketing schemes when flight number changes are proposed by safety departments. “We’re working on it slowly [with input from Eurocontrol and others].”

The possibility of ATC systems to exploit enhanced Mode S data from aircraft transponders — as part of technological solutions to altitude deviations — has run into roadblocks in the United States and elsewhere. The key benefit discussed at the forum is enabling controllers to confirm in real time pilots’ altitude-data inputs to the flight management system after accepting ATC clearances. “A solution like [enhanced Mode S] is a major endeavor, requiring rulemaking so that the airlines equip and for FAA to also equip, and the cost of doing that was prohibitive,” Teixeira said.

Not all of ATO’s efforts to accommodate airline pilots’ suggested solutions have proved to be as straightforward as expected, however. One effort was intended to reduce altitude deviations that followed the introduction of four new departure routes in the airspace around Chicago airports.

“They had speed control as part of the instructions to pilots,” Teixeira said. “The proper [standard chart] placement of those [instructions] is in the upper right-hand corner of the chart. We had hundreds of altitude deviations and speed control violations out of these departures because pilots operating out of Chicago [assumed that they] knew the airspace. They do [these] several times a day, [and] they just didn’t pay any attention to the chart.”

In meetings with controllers, pilots got agreement that the best solution — while contrary to charting standards — would be to publish the overlooked instructions in the center of the chart to capture the typical pilot’s attention.

“Once we developed that nonstandard charting solution, we eliminated this problem — and thus eliminated hundreds of altitude deviations,” he said. “Eighteen months after we put this in place, we started seeing these altitude deviations again.” The cause that emerged was that, unknown to the safety council, different FAA chart specialists had put the speed control instructions back in their standard position and had issued this “corrected” chart. In response, the safety council requested that the more effective, nonstandard version be restored. 