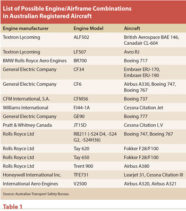 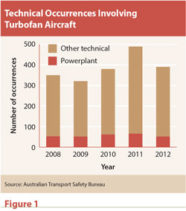 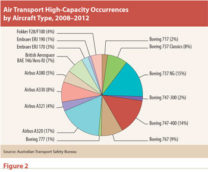 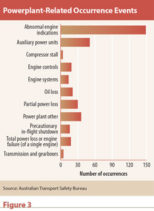 Powerplant problems comprise a relatively small portion of turbofan-powered aircraft technical failures reported to the Australian Transport Safety Bureau (ATSB) between 2008 and 2012, according to an ATSB Transport Safety Report released in June. Of the 20,500 safety occurrences of all types reported to the ATSB by flight crews and operators of Australian civil-registered turbofan-powered aircraft during the five-year period, approximately 1,930 occurrences related to technical failures; of those, only 280 of the technical failures, were classified as powerplant occurrences, the ATSB said in its report (Figure 1).

The report, “Power Plant Failures in ­Turbofan-Powered Aircraft,” is planned to be the first in a series of research investigations examining technical failures reported to ATSB over the five-year period. Other reports in the series will look at airframe and systems issues affecting turbine-powered aircraft, and technical failures involving turboprops, piston-engine fixed-wing aircraft, and piston and turboshaft-powered helicopters, ATSB said.

Under Australia’s Transport Safety Investigation Act and Regulations, technical issues must be reported to the ATSB if they constitute a transport safety matter, which can include anything that has affected, or has the potential to affect, the safety of an aircraft. Powerplant-related technical issues that occur from the time an aircraft is being prepared for flight until all crew and passengers have disembarked after the flight must be reported when they include: a failure that prevents an aircraft from achieving predicted performance during takeoff or climb; an uncontained or contained engine failure; a malfunction that affects the operation of the aircraft; any technical failure that causes death or serious injury, leads to aircraft control difficulties or seriously affects operation of the aircraft; items that become detached from the aircraft; and a failure that causes fumes, smoke or fire, or leads to crew incapacitation.

During the five-year period reviewed, the number of reported technical failures in turbofan-powered aircraft fluctuated between a high of 489 in 2011 and a low of 321 in 2009. The powerplant occurrences remained fairly constant over the period, ranging from 52 to 66 occurrences per year, or 13 to 15 percent of the annual total of technical occurrences.

The powerplant-related occurrences originate from six operation groups: air transport high capacity, which comprise aircraft certified as having a maximum capacity of more than 38 seats, or having a maximum payload capability that exceeds 4,200 kg (9,259 lb); air transport low capacity (38 seats or fewer, or payload capability of 4,200 kg or below); charter operation, which involves the carriage of passengers and/or cargo on nonscheduled flights for trade or commerce; aerial work; flying training; and private.

Failures related to auxiliary power units (APUs) were the next most prevalent with 51 occurrences of 18 percent of the total. APUs are not part of the propulsion system on an aircraft; they are turbines and have components, operating temperatures/pressures and failure mechanisms that are similar to turbines used for propulsion. The most common fault associated with APUs was smoke and/or fumes in the cockpit or the cabin, typically as a result of a contamination of the air conditioning as a result of an APU oil leak. These kind of events accounted for 29, or 57 percent, of the 51 APU events, two of which resulted in air-returns.

A total of 18 total power loss/engine failures were reported to ATSB during the study period. Two were the result of fuel starvation in cases with sufficient fuel on board that didn’t reach the engine. Both cases were the result of inadvertent selections of the fuel controls. One of the events resulted in an air-return, and in the other case, the fault was recognized, the engine was restarted, and the flight continued. Of the 16 other engine failures, four occurred at start-up, two during takeoff (with both resulting in rejected takeoffs), and 10 in flight. Four of the in-flight shutdowns resulted in air-returns and three in diversions. Two of the occurrences were uncontained engine failures.

ATSB broke down the data into occurrence by engine model (Figure 4), but removed the APU occurrences. The data in Figure 4 do not take into account fleet size or hours flown and do not represent a rate of occurrences. Figure 5, however, shows the rate of powerplant occurrences by aircraft model per 10,000 hours flown. ATSB stressed that the exposure data are expressed in airframe flight hours and not engine hours, and do not take into account the number of engines per aircraft. The 747-300s and -400s, the Airbus A380 and the BAE 146/Avro RJ are four-engine airplanes, and the others are two-engine airplanes. Also, hours flown were not available for the aircraft undertaking charter operations, namely the Learjet 45, 36 and 35A; the IAI 1124; the Canadair CL-604; the Raytheon 400A; Cessna 560 and 525; and Hawker 900XP, so those aircraft are excluded from Figure 5. APUs are included in the rate dataset because it is based on airframe hours flown.

Ninety-eight percent of the 280 powerplant-related events were classified as low-risk occurrences indicating a low-risk outcome or no accident outcome, four were classified as medium risk, two as high risk and one as very high risk, although none of them resulted in injury to passengers or crew. The very high risk occurrence was Qantas Flight 32, an Airbus A380 bound for Australia from Singapore. One of the Rolls Royce Trent 900 engines suffered an uncontained failure that resulted in significant structural and systems damage (ASW, 9/13).