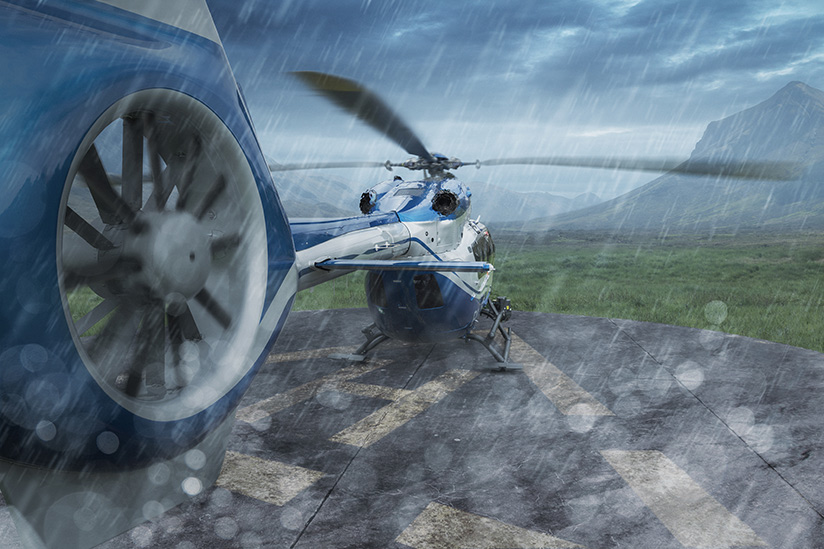 “It is well known that rotorcraft operations are very sensitive to the meteorological conditions and ice accretion,” says air navigation and air traffic management consultant Marcello Astorri. “The use of PBN operations guarantees to rotorcraft operators a wide array of benefits, including safety performance improvement.” For instance, more precise navigation can aid in mitigating the risk of controlled flight into terrain.  In addition, PBN enables all-weather IFR accessibility with reduced landing minima.

“PBN unlocks the value of all-weather helicopter operations and it provides a solution in several ways. It supports point-to-point trajectory-based flight operations that are unique to the helicopter, independent of legacy ground-based navigation. It also allows the helicopters to have all-weather access to low-altitude airspace, independent of fixed-wing traffic,” says Chris Baur, chief executive officer of Hughes Aerospace.

Because of the greater navigational/positional accuracy or containment, helicopters can operate in instrument meteorological conditions, requiring less airspace when supported by a space-based augmentation system (SBAS), such as the U.S. Wide Area Augmentation System (WAAS). “Aside from a much improved lateral containment compared to legacy ground-based navigation, PBN provides vertical guidance in the form of localizer performance with vertical guidance (LPV) instrument approaches. Helicopter LPV or point-in space (PinS) instrument approaches can have minimums of 250 ft height above surface (HAS) and 3/4 mi (1,207 m) visibility. This is the equivalent of having an instrument landing system (ILS) at your heliport,” says Baur.

The PinS approach is based on a global navigation satellite system (GNSS) and is an approach procedure designed for helicopters only. “It is aligned with a reference point located to permit subsequent flight manoeuvring or approach and landing using visual manoeuvring in adequate visual conditions to see and avoid obstacles. The PinS visual segment is the segment of a helicopter PinS approach procedure from the missed approach point (MAP) to the landing location for a PinS ‘proceed visually’ procedure. This visual segment connects the PinS to the landing location,” says Baur.

PBN enables reliable and precise navigation in helicopter operations down to required navigation performance (RNP) 0.3, which is a navigation specification used in the Norwegian mountains for air ambulance operations at low level flight. A performance value of RNP 0.3 assures that the aircraft has the capability of remaining within 0.3 nm to right or left of the centerline 95 percent of the time, according to the U.S. Federal Aviation Administration (FAA).

“In the departure phase, the standard instrument departure (SID) can be designed to an accuracy of less than RNP 1, thereby providing the operators — via flight procedure designers — with better options for engine failure contingency procedures to avoid obstacles and high ground. In the approach phase, the fact that the old stepdown approaches can be replaced with either PinS non-precision approaches or approaches with vertical guidance down to LPV minima represents a huge safety step,” says Jørgen Staffeldt, standards pilot at CHC Helicopter.

While the available technology and the equipment installed on helicopters are making it easier to transition to PBN, the pace of implementation of PBN procedures by helicopter operators is not uniform. “The capability to implement PBN operations for both rotorcraft and fixed-wing aircraft is one of the current improved navigation performance concepts that are being supported by both the industry and the rotorcraft operators around the world. Most modern instrument flight rules, twin-engine rotorcraft now are commonly delivered with suitable avionics compliant for PBN, such as automatic flight control system (AFCS), autopilot (AP) and flight director (FD),” says Astorri.

“The helicopters need to be approved during their certification to be able to fly each of the PBN navigation specifications. Most helicopters have a GNSS receiver and can normally fly PBN applications. The commercial ones will normally require SBAS capability, and to fly an APV [approach with vertical guidance] to LPV minima, they need dual GNSS receivers. This is done by using a dual SBAS FMS [flight management system] installation or one SBAS FMS supported by an ‘LPV monitor’ (a second GNSS receiver installed in the electronics compartment with a separate antenna) that does not take up real estate in the cockpit,” says Staffeldt.

“Today, the forward fit and retrofit possibilities are amazing in terms of capability and cost. Helicopter PBN procedures are used extensively throughout the United States, primarily in the HEMS industry. Many operators have both instrument approaches as well as PBN routes to support their network. The FAA continues to evolve helicopter criteria to meet the needs of the operators equipped with contemporary avionics and supported by WAAS as well as ADS-B [automatic dependent surveillance–broadcast],” says Baur.

Several research and development programs are progressing in Europe, including the PBN Rotorcraft Operations under Demonstration (PROuD) project. The objective of PROuD, in part, is to demonstrate that helicopter PinS procedures implementation can allow access to heliports in difficult environments when there is reduced visibility, according to the project’s website.

“The PROuD project has demonstrated in live trial environments how the adoption of PBN flight procedures improves the safety and reliability of search and rescue (SAR) operations and landing site accessibility in challenging environments, such as in adverse weather conditions or mountainous areas. Thanks to PBN, several SAR and HEMS missions will be regularly flown and [not] canceled or aborted for low visibility conditions,” says Astorri. “On this basis, standardised industry solutions are currently being developed to implement PBN operations and RNP database package procedures directly onboard rotorcraft flight management systems, and applied to heliports and/or to any available helipad where it is safe to perform the procedures. Such transition to PBN in Europe is at present guided and led by the EU 28 [European Union 28] partnership, which is formed by dedicated multidisciplinary PBN implementation team members.” EU 28 refers to the 28 member states of the EU.

Norway and Switzerland are leading the way with regard to en route application of RNP 0.3. In addition to the RNP 0.3 low level flight network (LFN) developed in the Norwegian mountains, the LFN of Switzerland, based on satellite navigation, links different airfields with permanent IFR infrastructures to hospitals and smaller airfields with specially designed PBN approaches.

Helicopter pilots have traditionally flown more visual flight rules (VFR) missions. There could be a risk in delivering more instrument navigation opportunities for helicopter pilots who are required to transition from VFR to IFR and vice versa, perhaps even several times during the course of a single flight. There is a need for something that will change the VFR mindset as the helicopter industry transitions toward PBN.

In this regard, new regulations from the European Aviation Safety Agency (EASA) on aircrew are bringing about training, testing and periodic checking requirements for PBN. “In addition to current conventional IR prerequisites, further training and checking requirements have been introduced, as well the associated privileges, for the instrument rated aeroplane and helicopter pilots in order to be authorized to fly PBN specifications in all phases of flight, including approaches,” says Astorri. “Training courses are, and increasingly will be, available for student and instructor pilots, as well as for other aviation stakeholders: air traffic controllers, flight dispatchers, airport operators, air safety and human factors experts, and military air transport operators. All courses are to be aligned with new PBN concepts, technologies, avionics and learning objectives as defined by EASA.”

“The statistics continue to indicate that the probability of CFIT [controlled flight into terrain] is a significant threat when helicopters are operated in conditions of reduced visibilities, cloud cover and low ambient lighting,” Baur says. “Indeed, to facilitate the change of the VFR mindset and allow helicopter pilots to be more regular users of IFR, it is important to provide the helicopter community with a durable, low-altitude IFR structure that is tailored to support helicopter operations.”

Mario Pierobon is a safety management consultant and content producer.