Bird Strikes on the Rise

Increases also were reported for bird strikes involving low capacity air transport aircraft, general aviation aircraft and military aircraft, the report said, noting that a decrease was seen only in the number of strikes reported in the category of unknown aircraft. Most reports involving unknown aircraft were submitted by airport operators who found bird remains, and the report said the decrease in that category, coupled with increases in specific aircraft categories, might indicate an improvement in the quality of data received by the ATSB.

The annual rate of bird strikes for high capacity air transport aircraft rose steadily throughout the 10-year period, the report said, adding, “It is likely that the speed and size of these aircraft, longer takeoff and landing rolls and large turbofan engines are factors contributing to the higher rate.”

For all categories of airplanes, bird strikes over the 10-year period were far more likely during takeoff and landing than in other phases of flight; helicopters, however, were mostly likely to report bird strikes during cruise flight (Figure 1).

Figure 1 — Proportion of Bird Strikes by Phase of Flight and Operation Type, Aggregated for the 2006–2015 Period 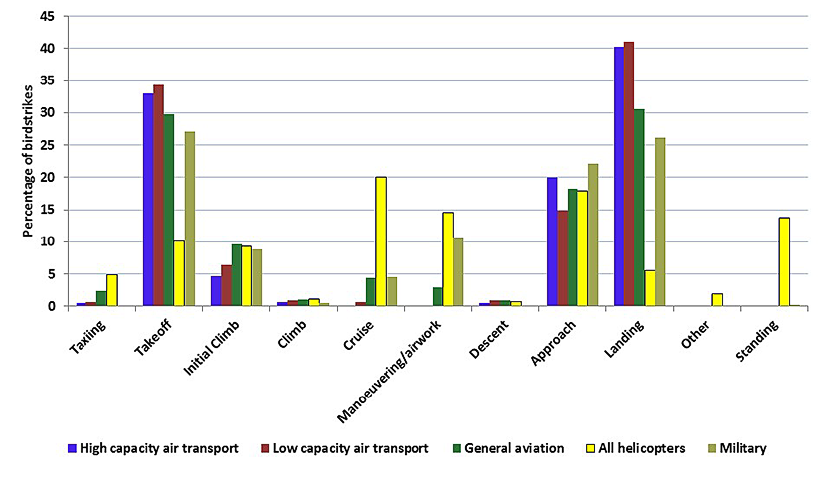 At most airports across Australia, bird strikes were most common between 0730 and 1030 local time (Figure 2). “In general, the likelihood for a bird strike is determined by the bird activity and aircraft activity in and around airports,” the report said. “Major airports, in particular, have weekday peak movement times in the mornings and evenings, which heavily influence the twin peaks seen in [Figure 2].” 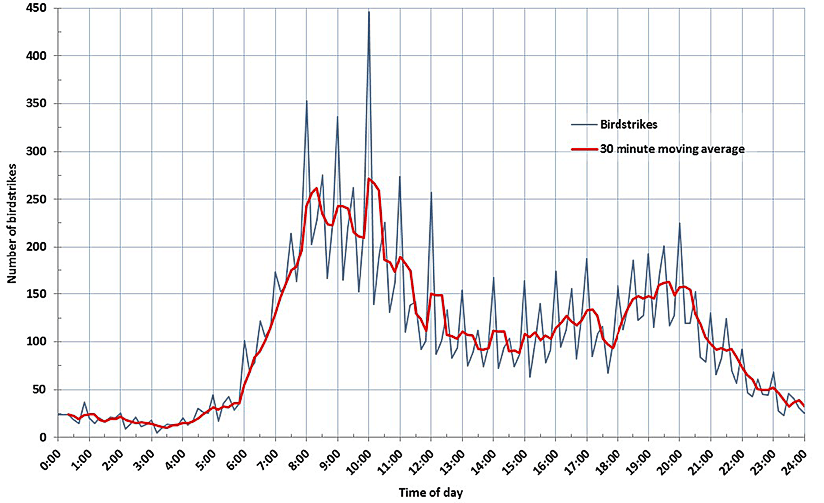 Most bird strikes in which a bird was ingested into an engine were reported to involve turbofan engines, the report said, noting that an ingestion occurred in one in every 10 strikes involving turbofan engine aircraft.

High capacity aircraft were involved in nearly 80 percent of all ingestion strikes — a total of 720 over the 10-year period, the report said (Table 4). Data show that of the 720 ingestions, seven were cases in which birds were ingested into both engines.