Birds … look at an airport and think they have found a sanctuary. 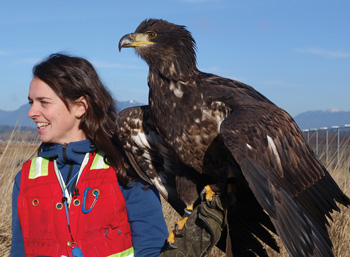 One of the scariest sights a bird can see while hanging out at an airport just might be … another bird. Not just any bird but one of several particular species of raptors that chase down other, smaller birds.

This relationship between the hunters and the hunted plays into the hands of some airport managers who want a multitude of tools at their disposal to ward off bird strikes. Falconry — hunting by a falcon or hawk in cooperation with a human partner — is one of those tools.

“Just the sight of a falcon flying is enough to scare the birds away from an airfield,” said Mark Adam, president of Falcon Environmental Services, which provides bird-strike prevention services at Toronto Pearson International Airport, Montreal–Trudeau International Airport and a number of military airfields in Canada and the United States.

“It’s like the shark in the water,” Adam said. “If you were at the beach and saw a shark fin [in the water], you’d get out right away. The same thing applies to raptors and smaller birds — they see that ‘fin’ and they get out.”

Exploiting that type of bird thinking, Adam’s company — and other similar operations at other airports — rely on teams of raptors and their handlers as part of a wildlife control program designed to keep birds away from aircraft.

Raptors were first used to drive nuisance birds away from landing and departing airplanes in the late 1940s at an airfield in Scotland. Initial success there prompted the creation of similar programs elsewhere in the United Kingdom and, later, in Europe and North America.1

Nevertheless, according to a team of California researchers, airport falconry programs for years were somewhat limited because of the relative scarcity of properly trained raptors and handlers, and the high costs of operating the programs.

“There’s a different awareness about bird strikes now,” said David Bradbeer, wildlife program specialist at Canada’s Vancouver International Airport (YVR), which instituted a falconry program in 2012, years after an earlier trial run that lasted less than a year in the 1970s. “These programs have come a long way.”

YVR, which already ran a diverse wildlife strike–prevention program, including habitat management, pyrotechnics, sirens and border collies (Airport Operations, 7-8/02), added falconry as a means of discouraging dunlins — migratory shorebirds that are resistant to other tactics. “We knew that shorebirds responded to predatory falcons,” Bradbeer said.

Birds have always been attracted to airports, and most look at an airport and think they have found a sanctuary, Adam said.

Aside from the noise generated by arriving and departing aircraft, he added, “it’s a fairly quiet environment, with warm surfaces like paved taxiways. We’re there to create a hostile atmosphere [so these birds understand that] it’s not a good place to come in and relax and eat.”

At Pearson, for example, 30 raptors — peregrine falcons, gyrfalcons, Harris’s hawks and bald eagles — are stationed at the airport, along with about a dozen handlers. They work 365 days a year, in teams, covering the airport from one hour before sunrise to one hour after sunset.

“These birds [the raptors] do a great job of moving a large number of birds [potential bird-strike victims] over a large area,” Adam said.

Each type of raptor has its own specialty when it comes to encouraging other birds to leave the area, he said.

Because of the falcon’s speed and ability to cover lots of ground relatively quickly — peregrine falcons travel at 40 to 60 mph (64 to 97 kph) in level flight and up to 200 mph (322 kph) in a steep dive called a “stoop” — they work best in open areas.2 Harris’s hawks, which are slower but more calculating, are used primarily in tight quarters, where more maneuvering might be necessary to deliver the move-along message. Bald eagles — more than twice the weight of other raptors and menacing enough to alarm almost any other bird — can dispatch geese that might not respond to the smaller, less frightening falcons.

“A falcon might scare away a goose, but a bald eagle is guaranteed,” Adam said.

At YVR, the raptors’ schedule is different, but the results of their work are the same. Seven to 10 raptors — mostly peregrine falcons but also gyr-peregrine hybrids, Harris’s and Ferruginous hawks, a bald eagle and a young golden eagle — live at the airport from October until April, when the largest number of wintering shorebirds are in the area, said Gillian Radcliffe, director of Pacific Northwest Raptors, which runs the YVR falconry program.

During that time, the raptors work about eight hours a day at varying times, often depending on the tide. Dunlins’ daily routines are dictated in part by the tide, and when high tide comes, they tend to head for the airport.

As at Pearson, each species of raptor has its specialty, and “we change them around, depending on the birds’ skill sets,” Radcliffe said. The eagles are especially good at intimidating waterfowl, she said, noting that the sight of one of the eagles patrolling the airport’s perimeter is enough to make an approaching flock of snow geese turn away.

Transport Canada (TC) data show that 1,545 bird strikes were reported in Canada in 2012, the most recent year for which data are available. That number represented an increase of slightly more than 1 percent from 2011 but was about 9 percent below 2010’s total.3 Strikes involving other wildlife account for considerably smaller numbers — 39 mammal strikes were reported in 2012, with the most frequently struck species being rabbits (13 strikes) and coyotes (seven strikes).

Pearson reported more bird strikes (131, or 8 percent of the total) in 2012 than all other Canadian airports except YVR, where 12 percent of the reported strikes occurred. Not only is Vancouver’s airport located on a major Pacific flyway, it also has parks and wildlife conservation areas nearby, making it appear to be an attractive rest area for birds.

TC data show that, about 60 percent of the bird strikes reported in 2012 did not identify the type of bird involved. Of those that were identified, however, about 6 percent were hawks and eagles. Those particular raptors were types that would not have been inclined to control airport “nuisance birds” but instead would have been focused on catching mice and other small rodents and have been “almost oblivious” to aircraft, Adam said.

Risk assessment, which always is performed at the start of a program, can involve the use of avian radar to track bird movements, which then are compared with aircraft movements to determine the time of day, or the time of year, when a strike would be most likely, he said. Risk assessments are updated at five-year intervals, he added.

The raptors used in the company’s programs are bred at company facilities especially for their roles in wildlife management, Adam said.

“Over the years, we have been able to refine the falcon gene pool to reflect traits or characteristics we are interested in,” he said. “Consequently, we have very little turnover in our falcons.”

When it’s time to go to work, a handler typically takes a position that allows for the release of the raptor so that it flies into the wind when it takes off at an angle that puts it in view of the airport nuisance birds, he said. As the raptor is released, the handler pulls out a lure — made primarily of leather and outfitted with wings to resemble the same type of bird that the raptor is chasing. When the lure is pulled out, so is a reward — often a small piece of quail — that draws the raptor back to the handler.

The goal is not for the raptor to catch the prey — that happens only about 1 percent of the time, Adam said — but rather for the sight of the raptor in flight to scare the prey away from the airport.

Only rarely does a working raptor fail to return to its handler, he added, noting that the birds are equipped with transmitters that allow handlers to track them down and scoop them up. This happens most often with younger, less experienced raptors, he said.

The working raptors “naturally have a tendency to do this [kind of work],” Radcliffe said. “They’re hunters by nature.”

Their training is intended to encourage them to be responsive to their handlers and to discourage too much independence, limiting the chances that one day, one will fly off
the job.

When the raptors are young, they do a lot of “fitness work,” Radcliffe said. Their basic training accustoms them to working with their human handlers, lets them experience traveling short distances while crated and introduces them to lures, she said. One exercise involves filling a large balloon with helium, attaching a lure underneath and letting the bird follow the balloon to 500 or 600 ft and then return, with the lure, to a handler on the ground, she said.

“We want them to range out and pursue problem birds … but we don’t want them taking off in hot pursuit of everything,” she added. “We don’t encourage them to be aggressive hunters.”

Training continues even as the raptors grow accustomed to their work, and their handlers are “constantly evaluating and assessing” their behavior, she added. “Sometimes, there’s something in their behavior that we’re not so keen on.”

In those cases, more training can correct the unwanted behavior, or the bird can be taken out of the program.

“Things change over time,” she said. “Some are very good at bird control for a number of years.” 