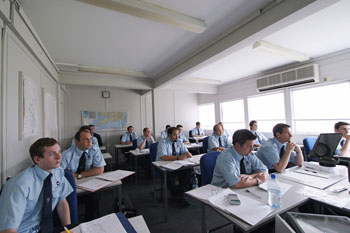 Yet comparing the presentations shows that — while respectful of many past risk-reduction achievements in commercial air transport — the experts did not hesitate to call for industry stakeholders to relinquish any belief, practice or cultural norm when today’s best evidence proves an increased risk or obsolescence.

Jim Green, a captain and professor of aviation science at Utah Valley University, has observed a trend toward less airline emphasis on crew resource management (CRM) — perhaps because airline flying overall is so safe, he said — despite what he considers a critical need for a new CRM version geared to new-entrant airline pilots.

He urged airlines not to forget how difficult it was in the 1980s to gain acceptance for CRM from the airline pilot community. “CRM was considered charm school, and they resented it to an extent,” he said. “It was macho not to use a checklist.”

Describing approach-and-landing scenarios in which these character attributes made a safety difference when he flew as a first officer and captain, Green called for the CRM training–developer community to significantly upgrade what is being done now. “People involved in CRM should speak out now” against gradual CRM abandonment and in favor of these changes, he said.

Government and industry also must get ready, Green said, for a future in which automated assistance — possibly even a Google search–like capability — immediately will present to every flight crew the world’s most relevant knowledge for safely responding to critical in-flight situations.

Wally Hines, director of standards, Jetpubs, described how airlines’ adoption of safety management systems (SMS) has helped to create classroom environments in which pilots are much more likely to speak up about their own errors in front of their colleagues, admit when they do not adequately understand an aircraft system and/or ask for individually “prescribed” remedial skill training.

“Another part of this [SMS] recipe is actually having a legitimate safety culture where people are able to come forward and say, ‘Hey, I have a lot of issues with this,’” he said. “As a general rule [otherwise], we sit in recurrent [training] and, if we do have a question, people are hesitant to raise their hand and ask the question if everybody else looks like they understand [the topic].”

In light of this positive trend in professional culture, he said, specific levels of pilot knowledge of many subjects today have to be measured objectively. This enables judging the effectiveness of costly recurrent training and continual improvement of the positive atmosphere. The key now is focusing on individual needs and differences instead of one-size-fits-all classes, Hines said.

He advocated specialized training opportunities, for example, for groups of pilots with a common weakness. “Let’s run a specialized recurrent class for those people, and let’s be down-and-dirty,” Hines said. “Let’s ask questions. Let’s sit across the table from one another and really tear this thing apart with the objective of them coming out with a better experience. … If the airline has the data [to identify a hydraulics expert and a novice, for example], and it’s possible, let’s throw those two in the sim together, and let’s run a hydraulics scenario. Now we’ve created a situation intentionally … where [with the instructor] we’ve got everybody in the room. We’re creating an event that really will be impactful for the novice.”

Thomas Walby, director, flight training, Airbus Training Center–Miami, discussed how Airbus training centers now require simulator instructors — who are well qualified but may have logged little or no recent flying in actual line operations — to spend time in ATC facilities to “get back into the swing of current procedures” and observe problem areas. The training centers also are adapting to changes/additions in the air carrier provisions of U.S. Federal Aviation Regulations (FARs) Part 121 regarding fraud and the falsification of training records, and the U.S. Federal Aviation Administration’s (FAA’s) jurisdiction to take certificate action and assess civil penalties; new requirements for FAA approval of a wider range of training devices such as door trainers for cabin crew; and detailed training in full flight simulators on pilot monitoring skills and progressive-intervention strategies. Also newly required for airline pilots is training in manual slow flight and manually controlled instrument arrivals and departures, he noted.

Other changes to FARs allow modifying flight crew training programs when the air carrier operates aircraft types with similar flight handling characteristics, and require pilots-in-command to receive a proficiency check on each aircraft type flown, Walby said. “Before, airlines could take credit [for pilot training] on numerous aircraft types for training events on one,” he said. Others included a requirement for runway safety maneuvers and procedures training, and one for aircraft control in crosswind landings with gusts.

Scott Morris, first officer, Southwest Airlines Human Factors, Risk and Resources Department, discussed how to enhance the organizational culture and professional culture factors that can affect the quality of pilot monitoring. Such factors come into play, for example, when the pilot monitoring actually does not even consider slips and lapses during monitoring as threats, he said. Lack of good training, being rushed and becoming distracted also have been causal factors in errors identified across many airlines studied.

“Aggregately speaking, [team members currently developing an FAA pilot-monitoring advisory circular] find that pilots do not perform cross-checking of mode control panel inputs very well,” Morris said. “As well, pilots do not cross-verify the [flight management computer (FMC)] inputs very well, either — the verbalization of what they are doing and the verification from the crewmember as to FMC inputs. Pilots do not accurately or successfully verify the flight mode annunciator. On the primary flight display, when an input is made, that is their primary means to verify and to assure that what [they believe] has been selected has in fact been selected.”

Anthony Petteford, executive vice president, CTC Aviation Group, told attendees that under many states’ regulatory regimes, new entrants can earn a pilot license, be hired by an airline and begin type-rating training without any form of transitional multi-pilot training — and the trainee will have improvised the training process and have no auditable training records. “This must stop; it must not continue,” he said, given what the air transport community learned during international development and adoption of the multi-crew pilot license (MPL).

The main reason, he said, is the realization that too many pilots who begin airline careers after 1,500 hours of single-pilot operations revert to that skill set and mentality during an emergency on a two-crew flight deck.

“One of the challenges we faced in the development of the MPL has been … myths that have arisen,” he said. “The first myth is that if the MPL fails — if it ceases as a regulatory process or if the airline decides to abandon the use of MPL — [the holder will believe] ‘I’m left with nothing.’ This is not the case. Any training organization involved with MPL and working with a partner airline to develop an MPL has committed that in the [highly unlikely] event that that circumstance exists, they will bridge [anyone affected] to a traditional pathway. … There is no example of [a case] where they were not covered in this way.

“Secondly, [the myth exists that] ‘I’ll be a copilot forever with an MPL.’ The MPL is a first officer qualification without doubt. … However, when they meet the requirements of an airline transport pilot license [ATPL] in all its forms, they can obtain a full ATPL and become the captain of an airliner. … Thirdly, [the myth exists that] ‘I can’t move [among] airlines with an MPL.’ … When they conclude their line-oriented experience check, the course is now complete, and they can continue with the rest of their career. If they wish to move to another airline, they complete a type-rating conversion program, and they can move to another carrier. … Finally, there’s no such thing as a ‘generic’ MPL.”

Petteford nevertheless called for new research to focus on all of today’s incoming “digital native” pilots to determine objectively how well they can solve in-flight problems other than by pushing a button on the flight deck automation, and in turn, on how to develop/remediate such critical problem-solving skills.

Glenn King, director of the Advanced Pilot Training Program, National Aerospace Training and Research Center, presented research and technology now used in his program for airplane upset prevention and recovery training (UPRT) of airline pilots, suggesting a direction that UPRT could evolve. He described the program as essentially exceeding the recently adopted international standards and recommended practices through its use of advanced, sustained motion, g-producing training devices (Gyrolab) that “create a physiologically, psychologically and emotionally authentic upset environment.”

According to King, neither the UPRT conducted for some pilot categories in all-attitude, all-envelope airplanes nor UPRT conducted in typical airlines’ most advanced Level D flight simulation training devices (FSTDs) fully matches a Gyrolab’s UPRT-relevant capabilities. (He did not compare stall-capable FSTDs, g-awareness devices, spin devices or spatial disorientation devices that will supplement Level D FSTDs.) In contrast, he said, a Gyrolab produces accurate sensations and recovery from worst cases like an inverted flat spin (see “Teaching UPRT” and “Starting Lineup”).

“In-aircraft training … has its limitations,” he said. “Realistically, if you look at the motion of a Level D-type simulator, it’s a pretty benign flight environment. We want to be able to take pilots and put them into an environment that produces the full sensations and physiological effects of an upset event. … We can allow pilots to explore the normally dangerous envelope that they don’t get a chance to practice in Level D-type sims. They also don’t get to practice some of these types of maneuvers in aircraft because of limits on aircraft stress.

“In a lot of the upset-training scenarios I see, the pilots are on a low, slow and ‘dirty’ [flaps and landing gear extended] short final, and they get hit with a wake vortex upset. [In] the first three seconds of that encounter, they’re just trying to get past the startle factor. Pilots don’t have [that much] time to think what they’ll do; they have to instantly get back to their training, get muscle memory going and get the proper flight control inputs. They need to do this when they’re scared. … So we do want to give pilots the ability to get close to the edge and feel what it’s like when they’re up at 3 g or so, and they’re sustaining that pullout for a recovery.”

Jacques Drappier, a captain and senior adviser, Airbus, said that given that multinational flight crews are becoming the norm — as is already happening in several world regions — the timing is right for airlines to reconsider how their long-held assumptions about the related risk implications actually measure up against the research literature.

One valuable line of inquiry into academic literature, he said, is seeking to understand the practical significance of reports that suggest that professional and organizational cultures of airline pilots actually can be changed by training. Drappier found, for example, that there is evidence that worldwide, in critical operational situations, airline pilots’ professional culture typically overrides the relatively unchangeable national cultures of pilots.