Droning On About The Weather 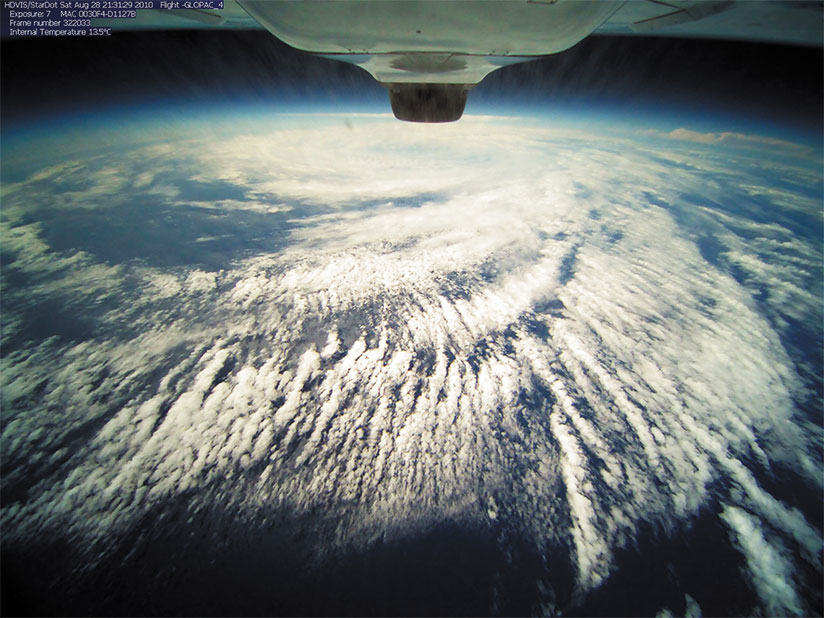 The primary use of UAS in meteorology is to gather basic information on atmospheric conditions. The old axiom in meteorology is “the more you know about the weather now, the better your forecast will be.” Typically, weather is monitored from surface-based weather stations and from weather satellites. In addition, radiosondes, balloon-borne weather instrument packages, can obtain a vertical profile of the atmosphere, but they are expensive systems and are launched only twice a day and from sites that are far apart and only on land.

For years, some commercial jetliners have been equipped with weather sensors, and they report data on pressure/height, temperature and wind speed/direction from locations and at heights previously unavailable. But these data are extremely limited in scope.

UAS, specifically designed and flown to monitor weather conditions, can provide more data and fill in information gaps at various altitudes. Closer to the ground, they can report on conditions over a wide area, between established surface observation sites. For example, in Alaska, where more than 75 percent of communities do not have access to roads and depend on aviation for access to food, mail, jobs, school and medical services (ASW, 4/15, p. 11), weather stations are few and far between. Fairweather, a private company, has been providing weather observations for aviation since 1976. The company is expanding operations to include UAS flights into remote areas.

Vertically, UAS also can monitor weather conditions and are considerably cheaper than radiosonde systems. Higher-flying UAS aircraft can be equipped with dropsondes, instrument packs that can be deployed from the aircraft and descend toward the surface while continuously transmitting weather data. Some UAS aircraft can fly high enough to provide imagery that can equal or even surpass what is available from weather satellites.

The basic technology of UAS has been, to a large degree, driven by military purposes, but it is not that difficult to adapt them to weather data gathering. The basic airframe is the same, just the payload changes. The Aerosonde, designed and built by Aerosonde, a strategic business of AAI Corp., itself an operating unit of Textron Systems, was widely used by the military, but can be fitted with meteorological instruments that measure atmospheric pressure, temperature, and wind speed and wind direction. One Aerosonde flew a mission in Terra Nova, Antarctica, that lasted 17 continuous hours in air temperatures as low as minus 36 degrees F (minus 38 degrees C).There are also UAS aircraft that can be flown at very high altitudes. The liquid hydrogen-powered Global Observer, developed by AeroVironment, can fly as high as 65,000 ft. At this height, an imaging system can cover 600 sq mi (1,554 sq km). And unlike satellites, a UAS aircraft can be moved relatively quickly on command to observe storm systems or other phenomena.

The orbit of the standard Geostationary Operational Environmental Satellite (GOES) can be adjusted, but they are so high up (22,000 mi [35,398 km]), it wouldn’t help to move them on an operational basis. The polar orbiting satellites are much lower (500 mi [805 km]) but, of course, are in relatively fast moving polar orbits. They can view an area several times a day, not continuously. A UAS is much lower and so would have better coverage of a storm system.

The U.S. National Oceanic and Atmospheric Administration (NOAA) is actively engaged in a UAS program and is highly enthusiastic about its potential impact. NOAA says on its website <uas.noaa.gov>, “Unmanned aircraft systems can revolutionize NOAA’s ability to monitor and understand the global environment. There is a key information gap today between instruments on Earth’s surface and on satellites — UAS can bridge that gap. UAS can also collect data from dangerous or remote areas, such as the poles, oceans, wildlands, volcanic islands and wildfires. Better data and observations improve understanding and forecasts, [and] save lives, property and resources, advancing NOAA’s mission goals.” The agency concludes that “UAS will revolutionize NOAA observing strategies comparable to the introduction of satellite and radar assets decades earlier.”

In aviation, any type of convection is a concern. For the general public, severe weather elements generated by convection, such as large hail, strong winds and tornadoes, are significant threats. There is a major push to utilize UAS to improve the forecastability of convection. The idea is to use UAS to sample the atmosphere in and around existing storms.

There are safety and geographical limitations for ground-based observers, known as “storm chasers,” in trying to collect data on storms. UAS aircraft can fly anywhere they are programmed/commanded to fly without endangering anyone, and provide critical data just above the surface in the layer of air that “feeds” the storms. It has been estimated that warning lead times for strong convection may be increased from the present 20 minutes to as much as 60 minutes.

Hurricanes are another weather phenomenon that can produce widespread destruction. They also can wreak havoc on airline schedules, causing massive flight delays and cancellations and even airport closures. Although track forecasts for tropical cyclones have improved greatly in recent years, intensity forecasts have not. To a great extent, it remains a mystery why some systems intensify and some don’t. Each hurricane season, there are storms seemingly embedded in ideal conditions that fail to gather strength.

Of greater concern are the systems that intensify very rapidly. Weak tropical storms can become hurricanes within hours, and some hurricanes have increased several categories in intensity over the course of a day. The secret may lie in the internal structure of the storm. UAS aircraft are a relatively cheap and safe way to penetrate a storm and monitor conditions inside it.

In September 2005, an Aerosonde became the first UAS to fly into a tropical storm, Ophelia, off the U.S. East Coast. It transmitted real-time information twice a second. The UAS aircraft at times flew only 500 ft above the ocean surface, far lower than a manned Hurricane Hunter aircraft could do safely. This flight provided detailed information about the lowest levels of the storm, which are critical in understanding a cyclone’s development.

In 2007, an Aerosonde was the first unmanned aircraft to penetrate the eye of a hurricane, according to the company’s website <aerosonde.com>. The aircraft, under a program administered by NOAA and the U.S. National Aeronautics and Space Administration, flew a mission of more than 17 hours, 7.5 of which were spent navigating Hurricane Noel’s eye and boundary layer.

Two Global Hawks originally built for the military also have been used in hurricane research. The Global Hawks, which can be flown at 60,000 ft, can fly over the top of a tropical cyclone. At these heights, they can measure the upper-level outflow of the storm, which can also greatly affect the storm’s intensity. The aircraft also can deploy dropsondes into the system to collect data through a vertical cross section.

But there are operational concerns in addition to the much-discussed potential for conflict between UAS and manned-aircraft operations. UAS typically tend to be smaller and lighter than manned aircraft, and UAS operators have noted that they are very susceptible to changes in weather conditions, particularly during takeoffs and especially during landings. There are no control towers to monitor the weather. There is no pilot aboard to directly view the conditions.

Meteorologists call the layer of air closest to the Earth’s surface the planetary boundary layer (PBL). The PBL is the most chaotic section of the atmosphere, and it is the part of the atmosphere most affected by interactions with the surface. Above the PBL, winds tend to be much more consistent in speed and direction, being dominated by larger-scale forces such as those generated by typical weather systems (highs, lows, etc.).

In the PBL, frictional effects are concentrated. Wind speed, which is — at least theoretically — near zero right at the surface, increases rapidly with height. Wind direction, which is the result of a balance of factors including the Coriolis effect1 also changes as the wind speed increases. And this is only for flat, featureless terrain. A change in surface type will change frictional effects and thus change the wind field. In reality, you must also consider the disruptive effects that natural and man-made objects have on the flow. So, not only are there great variations in wind speed and direction with height, but also variations in the horizontal plane.

The temperature profile in the PBL is profoundly affected by radiative effects from the surface. Tremendous temperature and density contrasts often are noted. In summer, daytime temperatures can easily exceed 100 degrees F (38 degrees C) near the ground but decrease quickly with altitude. Super-adiabatic lapse rates2 often exist on sunny days, and this guarantees vertical turbulence due to convection. At night, the reverse can occur, with colder temperatures near the ground and much warmer air above. These strong inversions can also affect wind patterns with calm conditions near the surface but with an abrupt increase in winds above the inversion layer. In winter, the temperature near the surface may drop below freezing with yet another set of ramifications.

In terms of condensation and precipitation, the PBL is the layer in which fog develops with the resultant reductions in visibility. This is also the layer into which precipitation will fall from cloud bases above. UAS aircraft may have to fly through rain, snow, sleet or freezing rain, and their operators have to be prepared for all the associated problems.

In summary, there can be tremendous variations in weather in a zone where UAS operators are flying aircraft that are very susceptible to changes in weather. Interestingly then, advances in meteorology due to UAS data collection may benefit the UAS industry itself the most.

Real-time weather data on visibility, cloud height and coverage, atmospheric pressure and wind speed and direction all are crucial, as will be accurate short-range forecasts of these elements. UAS operators need to know if the specific mission can be accomplished under prevailing weather conditions. At the same time, aviation meteorology will have to take a large leap forward to keep up with this advancing technology.