Dust in the Wind

Encounters with volcanic ash can damage aircraft engines and cause breathing problems for passengers and crew. 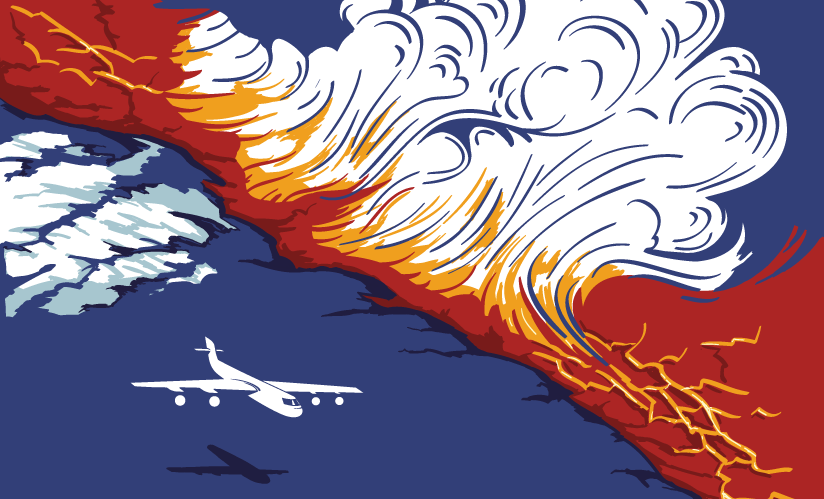 KLM Flight 867 from Amsterdam was descending about 90 miles from its destination, Anchorage, Alaska, U.S., on Dec. 15, 1989. The new Boeing 747-406 was carrying 231 passengers with a crew of 14. At Flight Level 250, approximately 25,000 ft, the aircraft entered a dark but seemingly innocuous cloud. The flight crew was unaware that this was a volcanic ash cloud emanating from the erupting Mt. Redoubt about 150 miles away. Sulfur-laden smoke filled the cockpit, and the crew donned oxygen masks and powered up to get above the cloud. But 10 to 15 seconds later, one by one, the four engines failed, as did the standby electrical system. The airplane began to lose altitude over mountainous terrain as the flight crew tried to restart the engines. After dropping more than 10,000 ft, the flight crew managed to restart the engines. The aircraft was safely landed at Anchorage International Airport.

It was later determined that volcanic glass shards had been ingested by the engines and had melted due to the powerplants’ high operating temperatures. The molten material then resolidified, blocking air passageways, leading to compressor stall and engine failure. Unknown to the flight crew at the time, their initial increase in engine thrust exacerbated the problem by increasing the engine compartment temperature. Then, as the temperature fell in the inoperative engines, the blocking material became brittle and enough of it fell out of the engines that they could be restarted.

The U.S. National Transportation Safety Board (NTSB) officially listed the cause of the accident as an “inadvertent encounter with volcanic ash cloud, which results in damage from foreign material … and subsequent compressor stall of all engines.” NTSB also said, “A factor related to the accident was the lack of available information about the ash cloud to all personnel involved.”

Besides damaging engines, high concentrations of volcanic dust can abrade cockpit windows to the point that visibility is greatly limited, and can block pitot and static sensors, resulting in unreliable airspeed indications and erroneous warnings. Dust and ash can be ingested by sensitive electronic equipment, causing failure. Dust and gases that enter an aircraft can cause respiratory distress for the crew and passengers. On the ground, volcanic ash deposits on a runway may degrade aircraft braking performance. Even if an aircraft can be landed safely, the damage incurred can be significant. The total bill for repairs on the Flight 867 aircraft totaled $80 million ($140 million in today’s dollars).1,2

Although similar events occurred in the past (a 747-236B also lost all four engines in a volcanic dust cloud but landed safely in Jakarta, Indonesia in June 1982), the Flight 867 event highlighted the danger of volcanic ash clouds.

According to the U.S. Geological Survey (USGS), “There are approximately 1,550 potentially active volcanoes around the world.” Not all of these pose a risk to aviation. Many typically produce effusive eruptions — an outflow of lava with few vertical emanations. This is in stark contrast to explosive eruptions — the violent eruptions that project ash, pumice and fragmented ballistic debris well into the atmosphere. As the USGS notes, “Hundreds of active volcanoes around the globe have the potential to severely affect aviation operations, and each year dozens of these volcanoes erupt explosively.”3

In response to this threat, the aviation community needed to develop a plan to deal with these potentially dangerous conditions. The International Civil Aviation Organization (ICAO) recommended that a number of Volcanic Ash Advisory Centers (VAACs) be established around the world to monitor volcanic ash clouds that could impact aviation operations and to send out appropriate warnings. By the late 1990s, nine centers (in Anchorage; Buenos Aires, Argentina; Darwin, Australia; London; Montreal; Tokyo; Toulouse, France; Washington; and Wellington, New Zealand) were established. 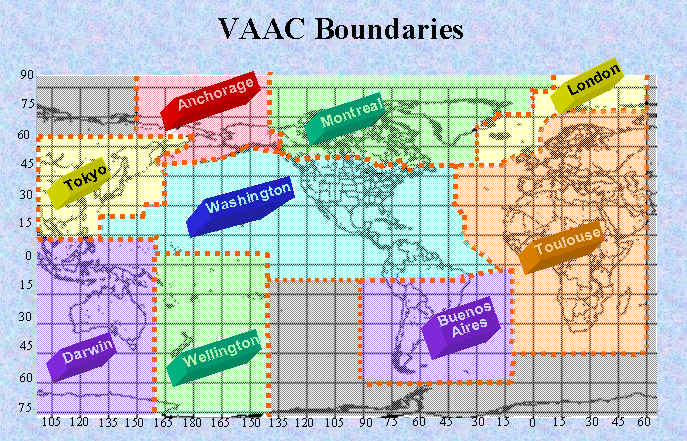 The aviation community also needed outside expertise and so turned to volcanologists and meteorologists. The volcanologists could help pinpoint when and where potentially dangerous eruptions could occur. Meteorologists could predict how the volcanic dust cloud would move and disperse. The goal of the VAACs was to link vital information from the various volcanology and meteorology agencies to air traffic control centers, airline operations and pilots themselves.

According to the USGS, “Volcanoes exhibit precursory unrest that, when detected and analyzed in time, allows eruptions to be anticipated and communities at risk to be forewarned. The warning time preceding volcanic events typically allows sufficient time for affected communities to implement response plans and mitigation measures.”

In 1990, the USGS developed a four-tier alert system for volcanic activity that was color coded for quick recognition by users. The four levels are Green Alert, volcano either non-eruptive or returning to quiet state after eruption; Yellow Alert, some signs of elevated unrest or after eruption, lessening of activity but could erupt again; Orange Alert, heightened unrest with higher likelihood of eruption or eruption with non-significant ash emission; and Red Alert, forecast of immediate eruption with significant ash emission or ongoing eruption with significant ash emission.4 On May 28, a volcanic eruption on Alaska’s Bogoslof island, which is part of the Aleutian Islands chain, prompted the issuance of a “code red” aviation alert. According to media reports, the cloud from the eruption reached at least 35,000 ft and possibly as high as 45,000 ft.

According to the USGS, volcanic ash is defined as “very small, solid particles ejected from a volcano during an eruption which have intermediate axes measuring 2 mm [0.08 in] or less” and even smaller “fine ash” with particles smaller than 0.063 mm [0.002 in] across. Huge quantities of this material can be ejected into the atmosphere at great heights. The June 1991 eruption of Mt. Pinatubo in the Philippines sent an estimated 1 cubic mi [4 cu km] of material into the atmosphere, some to heights exceeding 100,000 ft. The ash cloud circled the earth several times.This material can remain suspended in the atmosphere for weeks, months, or in the most extreme cases such as the Pinatubo eruption, years.

Once there is a volcanic ash cloud, there are a number of ways it can be observed. Not recommended, but occasionally unavoidable, is the penetration of such a cloud by an aircraft. Pilots are advised to exit such clouds immediately (coordinating with air traffic control). If entry does occur, pilots are advised to file a pilot report (PIREP) as soon as possible. There is a specific volcanic activity reporting form they should use. Included are the location of the aircraft and the exact time of cloud encounter, flight level, air temperature and wind, and the location of the cloud itself. Other information that could be included are details on the ash itself and any effects on the aircraft.

Much of the information on volcanic eruptions and ash clouds comes from satellite observations. It is estimated that only about 10 percent of the world’s volcanoes are monitored from the ground. Volcanic eruptions in remote areas can be identified quickly by satellite imagery. The resultant dust cloud also can be tracked.

As for the meteorology side, in the United States, the National Oceanic and Atmospheric Administration (NOAA) Air Resources Laboratory, working in conjunction with the Federal Aviation Administration, developed the Volcanic Ash Forecast Transport and Dispersion (VAFTAD) model in the 1980s. In 1992, the model was transferred to the National Weather Service, which handled the actual dissemination of the forecasts generated. The two VAACs in the United States (in Anchorage and Washington) utilized output from the VAFTAD. In 2005, the VAFTAD was replaced by the more sophisticated Hybrid Single-Particle Lagrangian Integrated Trajectories model (HYSPLIT).

Once scientists have determined the basics of the actual volcanic dust cloud, they need to determine what will happen to it. There are two components of the meteorological forecast: where the cloud will move and how it will disperse. The trajectory of the ash cloud will depend on the wind speed and direction at various levels in the atmosphere. Forecast information for the wind is added from the two main forecast models in the United States — the Global Forecast System and the North American Model. Dispersal models will forecast how the composition and density of the ash cloud will change over time.5

Once a VAAC has been alerted to a volcanic eruption, meteorologists there will issue an eruption SIGMET (an advisory containing significant meteorological information), if warranted. They will track the volcanic ash cloud mainly by satellite imagery and run the volcanic ash dispersion models to forecast the cloud’s movement. The VAAC will issue Volcanic Ash Advisory Statements that detail the three-dimensional whereabouts and movement of the cloud. SIGMETs will also be updated as necessary. The information will be relayed to Meteorological Watch Offices (MWOs). MWOs, as specified by ICAO, monitor all weather conditions that can affect aviation operations. They will distribute the information on volcanic ash clouds to potentially affected air traffic control centers. 6

In 2010, the volcanic eruption plan in Europe was put to a test when the Eyjafjallajökull Volcano erupted in southern Iceland in April. Although not a major eruption, the volcanic event continued for six days. Blown to the east by prevailing westerly winds, the ever increasing volcanic ash cloud overspread much of the United Kingdom and parts of western Europe. In all, tens of thousands of flights were diverted or canceled in what was an unprecedented peacetime disruption of air travel. The monetary losses to the airline industry alone were estimated at $1.7 billion. Total economic losses were estimated to exceed $4 billion. As a result of what were seen as inadequacies in the existing volcanic ash contingency plan, the ICAO’s European and North Atlantic Office revised the plan.7,8

Vital information on volcanic eruptions may be obtained, in the United States, on the Aviation Weather Center’s International Flight Folder Program, Volcanic Eruptions page, which has links to all nine VAACs. In Canada, the Montreal Volcanic Ash Advisory Center also has the links. Click on one of the nine office links for the latest information. A variety of products is available, often with digital imagery.

Reconsidering how to respond to ash clouds.