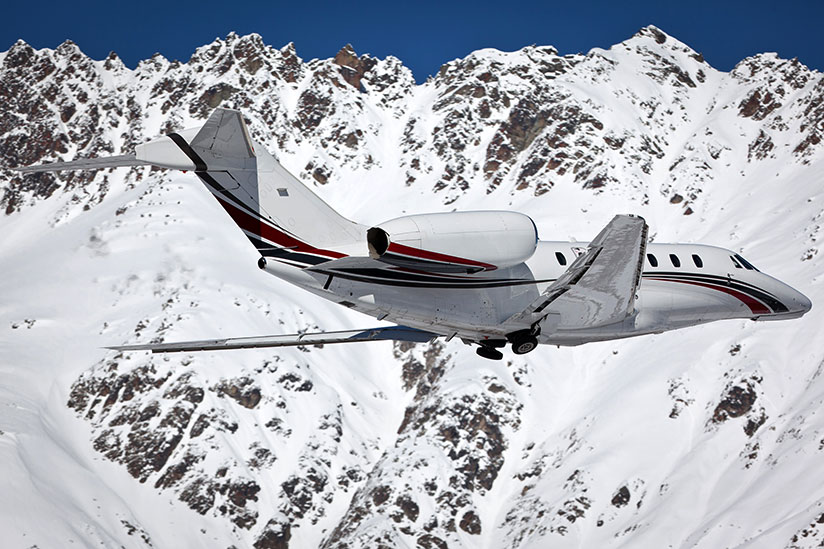 The pilots of commuter and on-demand aircraft should be given the same training in avoiding controlled flight into terrain (CFIT) as their counterparts who fly helicopters, the U.S. National Transportation Safety Board (NTSB) says.

In a series of recommendations to the U.S. Federal Aviation Administration (FAA), the NTSB cited its investigation of the Oct. 2, 2016, crash of Ravn Connect Flight 3153, a Cessna 208B Grand Caravan that struck a mountain in southwestern Alaska. The crash killed two commercial pilots and their sole passenger and destroyed the airplane.

Among other factors, Hageland aircraft were equipped with terrain awareness and warning systems (TAWS), but pilots routinely turned off TAWS visual and aural alerts when their aircraft were below the alerting threshold to avoid receiving nuisance alerts, the NTSB said in a summary released in advance of the final report on the accident.

“This crash involved a well-equipped airplane with not one but two professional pilots on board,” NTSB Chairman Robert L. Sumwalt said. “But the many layers of protection against controlled flight into terrain failed to protect the pilots and their passenger.”

The NTSB said the probable cause of the accident was the pilots’ decision to continue their VFR flight even though visibility was deteriorating and their failure to conduct an escape maneuver immediately after entering instrument meteorological conditions (IMC).

Contributing factors included Hageland’s allowance of the routine use of the terrain inhibit switch to block TAWS alerts and the company’s “inadequate guidance for uninhibiting the alerts, which reduced the margin of safety, particularly in deteriorating visibility.”

Other contributing factors were Hageland’s inadequate crew resource management (CRM) training, the FAA’s failure to ensure that the company’s approved CRM training complied with Part 135.330, and the failure of the company’s CFIT-avoidance ground training to address its needs and to include current CFIT-avoidance technologies.

The accident occurred about 24 minutes after departure in visual meteorological conditions from Quinhagak, Alaska. As the flight proceeded southeast, toward its destination of Togiak, the airplane was at an altitude of about 1,000 ft above mean sea level (MSL), or between 500 ft and 700 ft above ground level (AGL), the NTSB said. During the last four minutes of the flight, as the airplane approached a mountain ridge, it climbed to about 2,300 ft MSL, probably in IMC, the report said.

The airplane was equipped with a Class B TAWS with an en route required terrain clearance (RTC) of 700 ft AGL, which meant that — except in certain circumstances — flight below the RTC led to TAWS terrain alerts, the report said.

“Hageland flights operated under VFR were allowed to fly as low as 500 ft AGL, as was seen with this flight, which was flown en route below the TAWS alerting threshold,” the report said. If the pilots had not manually inhibited the aural and visual caution and warning alerts, “the TAWS would have provided continuous alerts for most of the assumed flight,” the report added, noting that the alerts “were likely inhibited for most, if not all, of the flight, eliminating a margin of safety.”

The NTSB cited several TAWS-related practices as safety issues, including a lack of effective protections against nuisance-alert mitigations for flights below the TAWS RTC and TAWS design limitations that require a pilot who has inhibited alerts to later act to uninhibit them.

“Remembering to uninhibit the system requires the pilot to adequately monitor the situation and perform the action at the intended time,” the report said. “However, research has shown that pilots can forget to perform an action due to multitasking, distraction, task interruption, absence of cues or poorly formed intentions in memory. Although the risk of making such an error is reduced significantly when operations are proceduralized and overlearned, a design that prevents the TAWS alerts from remaining inhibited indefinitely in the event that a pilot does not uninhibit them would provide a greater level of safety.”

This particular operator’s guidance to pilots on using the terrain inhibit switch was inadequate, the report said, noting that there was no official published policy and that the company recognized that the alerts could be distracting and allowed pilots to inhibit them. “The lack of specific guidance on TAWS use led to pilots routinely inhibiting a safety system important in CFIT prevention,” the report said.

The report also noted that Hageland provided CFIT-avoidance training to its pilots even though it was not required to do so. Because it chose to incorporate the CFIT modules, they were subject to FAA oversight.

“The module was not carefully focused on entirely relevant topics, and the CFIT-avoidance CBT [computer-based training] contained information extracted from a training aid that was more than 20 years old and did not address current TAWS technologies,” the report said. “It also did not specifically address Hageland’s operational environment.”

For example, the simulator used in training lacked realistic visual cues for the specified scenarios, as well as a TAWS to allow pilots to practice their responses to actual TAWS alerts, the report said.

One recommendation said that, although CFIT-avoidance training programs are not required for airplane commuter and on-demand operations conducted under Part 135, the FAA should “work with Part 135 operators in Alaska to improve any voluntarily implemented training programs aimed at reducing the risk of CFIT accidents involving continuation of flight under VFR into instrument meteorological conditions, with special attention paid to the human factors issues identified in recent Alaska accident investigations.” Those issues include the challenges of flying in mountainous areas of Alaska and of low-altitude VFR flight in areas subject to sudden changes of weather, and the “limitations of Alaska infrastructure,” especially weather observations, communications and navigation aids.

The FAA also should work with Part 135 operators that conduct VFR flights in any mountainous area (not just those in Alaska) below the terrain clearance of the aircraft’s TAWS, the NTSB said in a second recommendation. Their efforts should focus on ensuring that management and pilots are aware of risks stemming from distractions associated with repeated nuisance alerts and complacency associated with routine use of the TAWS terrain inhibit feature. The FAA and Part 135 operators should develop plans to mitigate the risks and minimize nuisance alerts, and to develop procedures that define the situations in which pilots should inhibit and uninhibit the alerts, the recommendation said.

The NTSB also recommended that the FAA:

Two additional recommendations, addressed to the Medallion Foundation, a nonprofit organization that provides guidance on CFIT training as part of its mission of reducing aviation accidents in Alaska, said the foundation should expand its CFIT-avoidance programs to require members to incorporate the materials into their FAA-approved training programs and training manuals, and to encourage use of a flight data monitoring program. Such a move would ensure FAA oversight of the programs, the report said.

A final recommendation to the operator called for modifying CRM training to include ground, simulator and flight training that “[defines] second-in-command responsibilities for dual-pilot operations,” including aeronautical decision making and judgment scenarios relevant to Hageland flight operations. The report noted that most of Hageland’s Cessna 208 flights were flown by a single pilot, and that, for cases in which a second pilot was assigned, Hoagland’s CRM CBT did not specify how the two pilots should work together and how they should work with the company’s operations control center, or discuss the duties assigned to the pilot flying and the pilot monitoring, the report said.

Both the NTSB and the FAA previously reviewed Hageland’s CRM training program, largely because of five accidents and a runway excursion incident between December 2012 and April 2014, which “collectively … suggested the likelihood of systemic problems,” the report said. After a fatal accident on April 8, 2014, the NTSB recommended that the FAA conduct an audit of regulatory compliance and operational safety programs, including training programs, at Hageland, as well as an audit of its own oversight of Hageland.

The FAA told the NTSB it had conducted the two audits and “had ensured that corrective action was implemented for all adverse findings,” the report said. The document added, however, that the investigation of the 2016 accident found that Hageland’s approved CRM training did not include all required elements.