Excursions Up, Ramp Accidents Down at EASA Airports 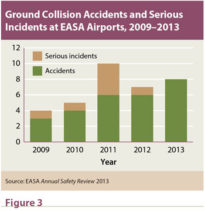 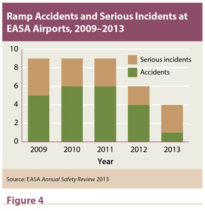 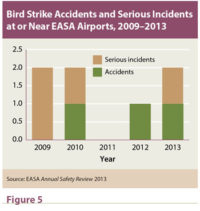 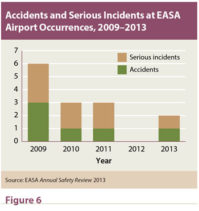 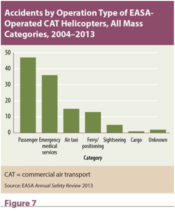 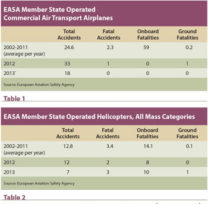 The number of runway excursion and ground collision accidents and serious incidents at Europe’s airports increased in 2013 from the previous year, but the number of ramp-related accidents declined, according to the European Aviation Safety Agency’s (EASA’s) recently released Annual Safety Review 2013. Data in the review cover the 28 European Union member states plus Iceland, Liechtenstein, Norway and Switzerland. Airports included in the data are all open to public use, serve commercial transport, provide instrument approach or departure procedures, and have paved runways of 800 m (2,625 ft) or more or exclusively serve helicopters.

EASA airports saw 32 runway excursion accidents and serious incidents last year, which is up from 20 in 2012 and more than in any other year in the past five years (Figure 1). Of 2013’s 32 excursions, 20 were accidents, as defined in International Civil Aviation Organization (ICAO) Annex 13, Aircraft Accident and Incident Investigation, and 12 were categorized as serious incidents, defined as incidents involving circumstances indicating that an accident nearly occurred. The annual number of runway excursion accidents and serious incidents had been on the decline since 2010, when 29 were recorded, up from 25 in 2009. The 20 reported in 2012 were the fewest in the 2009–2013 period.

In the past five years, there have been 132 runway excursion accidents and serious incidents at EASA airports, according to the Annual Safety Review. Of that number, 86 percent occurred during landing and 14 percent during takeoff. The European Aviation Safety Plan (EASp) identifies runway excursions as one of the key operational safety risks for commercial air transport aircraft (Figure 2).

Very few bird strike accidents or serious incidents have been reported at or near EASA airports over the past five years (Figure 5.) Two were reported in 2013, up from one in 2012 and zero in 2011, EASA data show.

Airport accidents and serious incidents, defined as those involving airport design or functionality issues associated with runways, taxiways, ramp areas, parking areas, buildings and structures, fire and rescue services, obstacles on the airport, lighting, markings, signage, procedures, policies and standards, represent another occurrence category tracked by EASA. In the past five years, there were 14 accidents or serious incidents within this category (Figure 6).

Airplanes of more than 2,250 kg (4,960 lb) maximum takeoff mass (MTOM) from EASA member states involved in commercial air transport (CAT) suffered 18 accidents in 2013, down 45 percent from the 33 in 2012 and down 27 percent from the 10-year (2002–2011) average of 24.6 per year, according to EASA data (Table 1, p. 46). In addition, EASA CAT operators had no fatal accidents last year, and suffered only one in 2012 when a ground operator was killed during baggage loading operations at Rome Fiumicino Airport. There has not been a year with more than one fatal accident involving an EASA member state–­operated airplane since 2007. CAT operations involve the transportation of passengers, cargo and mail for remuneration or hire and ferry/positioning flights. Aircraft accidents are aggregated by the state in which aircraft operator is registered.

In the 10-year period 2004–2013, the highest number of fatal accidents (five) were assigned to the loss of control–in flight (LOC-I) occurrence category, as defined by the Commercial Aviation Safety Team–ICAO Common Taxonomy Team. LOC-I involves the momentary or total loss of control of the aircraft by the crew. During the same period, there were four fatal accidents involving fire/smoke post impact (F-POST) and three accidents involving system/­component failure–powerplant (SCF-PP). The highest number of nonfatal accidents involved the abnormal runway contact occurrence category, which includes long, fast or hard landings, as well as scraping the tail or wing of the aircraft during takeoff or landing. Ground collisions and turbulence also were among the most common types of nonfatal accidents.