An unexpected pitch-up and near stall during an ILS approach led Dutch authorities to discover a previously unknown — and potentially dangerous — signal anomaly. 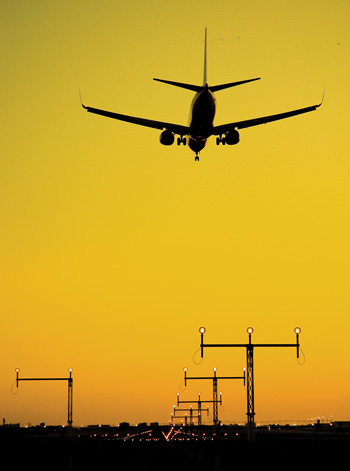 During the investigation of a recent serious incident, the Dutch Safety Board (DSB) found a “factor of interest” — an uncommanded climb and subsequent activation of the aircraft’s stick-shaker (stall-warning) system during an autopilot-coupled approach.

The aircraft, a Boeing 737-800, was inbound from Palma de Mallorca, Spain, to Eindhoven, Netherlands, with 124 passengers and seven crewmembers the morning of May 31, 2013.

The flight crew was receiving radar vectors for the ILS approach to Runway 21 at Air Base Eindhoven, a joint-use facility operated by the Royal Netherlands Air Force. Instrument meteorological conditions prevailed, and the crew had the autothrottle and the autopilot engaged with the approach mode armed, according to the DSB report.

A key element in the incident was that the aircraft remained above the 3-degree glide­slope throughout the approach. The published procedure included waypoints defining a wide curve onto final approach. To shorten the route, the arrival controller issued a base-leg vector that bisected the curve but would still position the aircraft to be turned onto the localizer course outside the final approach fix (FAF) (Figure 1).

Realizing that the aircraft was inordinately high and close on the approach, the captain told the first officer that a successful landing was unlikely and that they should be prepared for a go-around.

The crew selected a higher descent rate, but the 737 descended on a glide path parallel to and 1,000 ft above the 3-degree glideslope.

The 737 was about 1,000 ft above the ground and 1 nm (2 km) from the runway threshold when then autopilot captured a false (9-degree) glideslope. The pilots saw their glideslope indicators go full-down and then full-up before the aircraft unexpectedly pitched up. The pitch attitude increased about 3 degrees per second, reaching a maximum of 24.5 degrees.

The autothrottle commanded increased thrust, but airspeed decreased and the stick shaker activated. The crew recovered from the incipient stall and initiated a go-around. They subsequently conducted another ILS approach and landed the aircraft without further incident.

Alerted by the flight crew, the operator of the 737 reviewed the recorded flight data and reported the incident to the DSB. “The activation of the aircraft’s stick shaker during an autopilot-coupled ILS approach in close proximity to the runway was a factor of interest that prompted the Dutch Safety Board to start an investigation,” the report said.

Common factors were that the incidents occurred above 3-degree glideslopes and involved highly automated aircraft that were being vectored to the final approach course by air traffic control.

The report also said the investigation revealed that “flight crews’ decisions to execute a go-around or to challenge air traffic control seem to be postponed too long when flying high above the normal vertical profile during an ILS approach.”

The follow-up investigation led the DSB to conclude that “unknown ILS signal characteristics pose a significant threat to aviation safety, as they may result in unexpected aircraft behaviour and thus endanger the safety of passengers and flight crews.”

“An ILS is commonly perceived as transmitting a focused localiser and glide slope beam, which form[s] a narrow electronic ‘funnel’ leading to the runway,” the report said. “In reality, ILS antennas transmit a complex radiation field.”

The report said that the complexity of the radiated field foments erroneous as well as false glideslope and localizer signals. An erroneous glideslope signal typically is the result of interference to its free radiation by terrain, man-made objects or aircraft taxiing in posted ILS critical areas. Erroneous signals also can occur during ILS maintenance and testing.

False glideslope signals, such as the one involved in the Eindhoven incident, are normal products of signal propagation. A 3-degree glideslope basically is defined by the radiation of two signals, stacked vertically, on different UHF frequencies. One signal (modulated at 150 Hz) causes aircraft navigation equipment to generate “fly-up” commands; the other signal (90 Hz) causes “fly-down” commands. The null that exists between the two signals defines the actual 3-degree glide path (Figure 2).

“It should be noted that a glide slope interception from below ensures a capture of the correct 3-degree glide slope,” the report said.

The report noted that it is generally known that in addition to the normal 3-degree glideslope, false glideslopes are generated at 6, 9 and 12 degrees and so on at 3-degree intervals. However, the investigation revealed as false the assumption of some pilots that even a false glideslope signal will guide an aircraft to the runway, albeit at a steeper path.

When investigators measured glideslope signals at various airports in the Netherlands and the United States, they found that the signals can be reversed (Figure 3).

The report emphasized that current aircraft instruments and equipment provide no warnings to flight crews about signal reversal.

Based on the findings of the investigation, the DSB issued a safety alert in November 2013 that, in part, provided details about the potentially hazardous characteristics of ILS signal generation and their effects on aircraft, and recommended that operators provide guidance to flight crews “to mitigate the risks of unexpected autopilot behaviour when on ILS approaches.”

The board also recommended that aviation authorities revise and disseminate guidance and training programs to help flight crews avoid the potential hazards of false ILS signals.

Moreover, the DSB recommended that pilots conduct a simple flight path cross-check: Multiply the aircraft’s distance from the runway threshold (nautical miles) by three to obtain an estimate of the height (hundreds of feet) at which the aircraft should be to maintain a 3-degree glide path. For example, at 2 nm out, the aircraft should be at 600 ft.

“The use of [advanced] automation can result in situations where the flight crew’s flight-path management degrades,” the report said. “While supplementary aids or procedures may help [crews avoid] capturing a false glide slope, they should not substitute the regular distance versus altitude crosschecks that are part of the basic flying skills.” 

This article is based on the English translations of the Dutch Safety Board reports “Pitch-Up Upsets Due to ILS False Glide Slope” and “Stick Shaker Warning on ILS Final, Eindhoven Airport.” The reports and links to videos about the Eindhoven incident and false glideslope signals are available at <onderzoeksraad.nl/en>.