NTSB presses for new training and wider use of technology to help avert midair collisions. 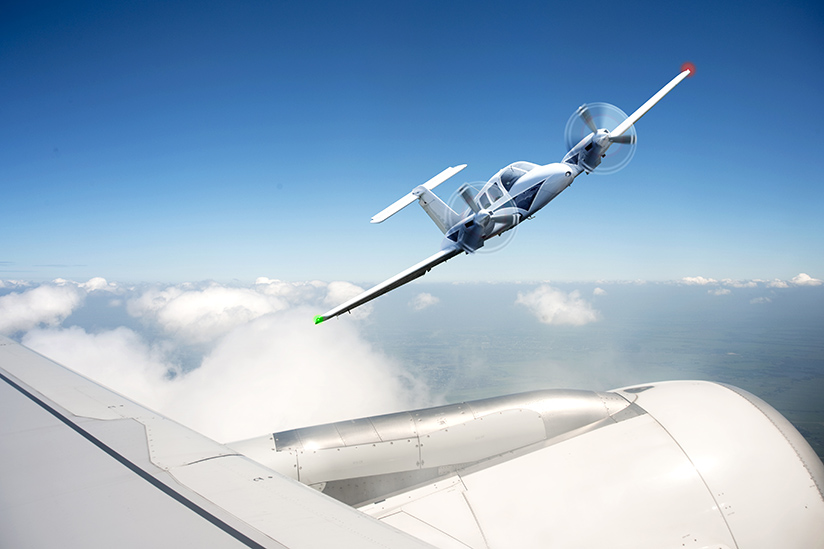 Citing the limitations of “the see-and-avoid concept of traffic separation,” the U.S. National Transportation Safety Board (NTSB) has issued a safety alert, a series of animations, and a pair of safety recommendations, all aimed at preventing midair collisions.1

“The see-and-avoid concept has long been the foundation of midair collision prevention,” the NTSB said in its safety alert, issued in November. “However, the inherent limitations of this concept, including human limitations, environmental conditions, aircraft blind spots and operational distractions, leave even the most diligent pilot vulnerable to the threat of a midair collision with an unseen aircraft.”

The NTSB urged wider use of cockpit technologies — such as traffic advisory systems and automatic dependent surveillance–broadcast (ADS-B) — to boost pilot awareness of nearby aircraft and maintain separation.

The safety recommendations, delivered in November to the U.S. Federal Aviation Administration (FAA), call on the FAA and three companies that operate federal contract control towers at U.S. airports to brief all air traffic controllers and their supervisors on errors by controllers in two fatal 2015 midair collisions and to include a discussion of the two accidents in initial and recurrent controller training.

“In both of these midair collisions, the controllers were experienced,” the NTSB said. “However, they made judgment errors that, if resolved early in the accident sequence when the conflicts were first detected, could have prevented the accidents.”

The two accidents cited by the NTSB were:

The NTSB said that, in the Moncks Corner accident, the controller “made assumptions that ultimately limited her options.” The agency cited as an example the controller’s report to interviewers that “when she observed the Cessna’s target on her radar display as it departed, she assumed that the airplane would remain within its local traffic pattern, which was not the case.”

As a result, the report said, the controller did not notify the F-16 pilot of the Cessna’s location until the smaller airplane was 3.5 nm (6.5 km) away from the F-16 horizontally and 400 ft away vertically.

“In addition, the controller’s expectation of the F-16 pilot’s performance was based on her assumption that a fighter airplane would perform a high performance turn to the heading,” the NTSB said. “However, this expectation of performance was not clearly communicated. Further, the controller judged her best final action to be to direct the F-16 to turn left, when other more conservative and safer options were available. Good judgment was at issue.”

The controller had recognized the potential conflict between the accident airplanes several minutes before the collision, but he confused the accident Cessna to the Sabreliner’s left with another Cessna that was on the Sabreliner’s right and issued control instructions to the wrong airplane; he then failed to confirm that the pilot he thought he was addressing was complying with the instructions, the NTSB said.

“Had he looked up to ensure that the control instructions that he provided to what he thought was the Cessna on [the Sabreliner’s] right were being performed, he would have noticed that the Cessna was not turning and likely would not have issued the conflicting turn instruction” to the Sabreliner, the NTSB added.

“Controllers must use good judgment by ensuring that their instructions are complied with before issuing additional instructions. Further, when the controller saw that the airplanes were in unsafe proximity to each other, his priority should have been to separate the airplanes by issuing a safety alert to the [Sabreliner] flight crew; instead, he separately called each Cessna pilot to verify their call signs and positions.”

In a Safety Recommendation Report that reviewed the two accidents and the resulting safety recommendations, the NTSB noted that, if the controllers involved in the two events had been able to resolve their judgment errors earlier, when the conflicts were first detected, the accidents could have been avoided.

The report said that scenario-based training can help controllers identify situations in which good judgment is critical to a positive outcome and that “the foundation for good judgment can be developed in trainees and reinforced in experienced controllers, indirectly using methods that include … review of events and situations where controller judgment was exemplar or could be improved.”

A study of the chain of events in each of these accidents offers an opportunity to “impart a lesson to the controller workforce on controller judgment, without the risk of exposing the participants to a poor decision that may lead to adverse safety outcomes,” the report said.

The NTSB recommendations called not only on the FAA but also on three providers of air traffic control services — Midwest Air Traffic Control, Robinson Aviation and Serco — to incorporate a review of the two midair collisions in sections of initial and recurrent controller training that discuss the need for “judgment, vigilance and/or safety awareness.”

The first of a series of animations created by the NTSB.
Source: U.S. National Transportation Safety Board

The two accidents were the subject of a series of animations created by the NTSB and are available on the agency’s YouTube channel. They depict the accident pilots’ field of view from the four airplanes involved in the midair collisions and “show how difficult it can be for pilots to spot converging aircraft that may present a midair collision risk in a dynamic visual environment,” the NTSB said. Companion videos add cockpit displays of traffic information, which would have shown the pilots of the accident airplanes precise locations of the converging aircraft.

“These accidents and the animations clearly demonstrate the safety benefit of augmenting pilots’ vision with technological safety nets,” NTSB Chairman Christopher A. Hart said. “Technologies in the cockpit that warn of traffic conflicts through displays or alerts can help pilots become aware of, and maintain separation from, nearby aircraft, even if they have difficulty seeing them.”

The NTSB said that it used three-dimensional laser equipment to scan the cockpit windows and the surrounding airplane structure of four airplanes resembling those involved in the two collisions to “create animations that, combined with radar data, provided an approximation of what each pilot likely saw before the crashes.”
Accident investigators also used radar data to demonstrate cockpit technology that alerts pilots to nearby aircraft and helps them maintain separation and to show how the technology might have warned the accident pilots of the other airplanes and helped prevent the collisions. The technologies “serve as another layer of safety in the case of air traffic control errors,” the NTSB said.

Pilots using the information provided by these technologies are often able to make slight changes in rates of climb or descent, altitude or direction to “significantly reduce the risk of a midair collision long before the conflicting aircraft has been seen,” the NTSB said.

The agency added, however, that although the technologies can enhance traffic awareness, “unless your system is also capable of providing resolution advisories, visual acquisition of and separation from traffic is your primary means of collision avoidance (when weather conditions allow).”

FAA to Adjust Hours of Some ATC Towers

Because of the reduction of traffic associated with the COVID-19 pandemic, the U.S. Federal Aviation Administration (FAA) says it plans to reduce the operating hours of about 100 air traffic…