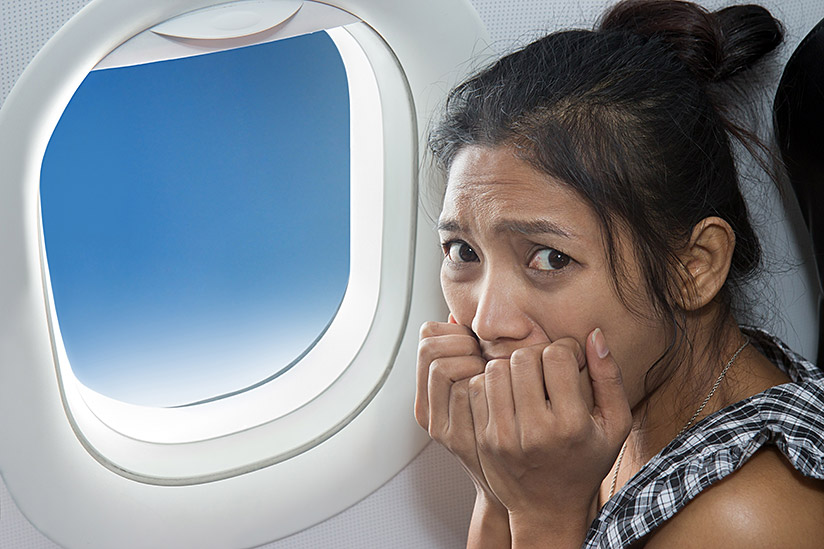 Fear of flying has become significantly less prevalent over the past 30 years, with those who are afraid telling researchers that their concerns center primarily around turbulence, unknown sounds and terrorist attacks.1

A report in the April issue of Aerospace Medicine and Human Performance cited surveys administered in Norway in 1986 and again in 2014–2015 that found the prevalence of “an assumed flight phobia” decreased from 8.1 percent of respondents in 1986 to 3.4 percent in 2015.

Flight anxiety exists at several levels, “from apprehension to complete phobia,” the report said, and it cited earlier surveys that have singled out a fear of flying as one of the top 10 fears expressed by people today. Fear of flying affects about 6.5 percent of the world population, and, in some industrialized countries, studies have found that up to 40 percent of the population may experience some degree of flight phobia, the report said. Despite fear, other data show that air travel has increased worldwide from about 421 million passengers in 1974 to 3.21 billion in 2014.

The report cited earlier research that found that the prevalence of flight phobia appears to increase with reports of terrorist attacks and outbreaks of serious diseases that can be spread easily among groups of people in confined spaces such as airliner cabins. A 2002 study, however, found that the Sept. 11, 2001, terrorist attacks involving four U.S. airliners had a “rather moderate and transient” effect on flight anxiety, and did not seem to have made passengers more afraid than before,” the report said.2

Nevertheless, the report noted that flight safety continued to increase and the rate of fatalities continued to decrease through 2017, the safest year on record for commercial air travel. (Increases in accidents and fatalities occurred in 2018 and early 2019, however.)

“It is consequently difficult to determine whether previous prevalence estimates of fear of flying are still valid,” the report said, noting the scarcity of recent research on the matter.

The report based its analysis primarily on two surveys. The first was a 1986 health questionnaire mailed to 1,000 people ranging in age from 18 to 75 by the Norwegian Government Computer Center; of the 1,000 people, answers were evaluated from the 79 percent who responded.

The second survey, administered in 2014 and 2015, was part of the Norwegian Population Study, which was designed to gather data on a number of health conditions. Invitations to participate were mailed, along with comprehensive questionnaires and written information, to a representative sample of the Norwegian population — 5,500 people age 18 and older who were registered as Norwegian citizens. The invitees received a new questionnaire three times, the report said, and 1,792 people responded and were included in the study.

Researchers conducting the 2015 study said that the scales used in their survey to rank fear were almost identical to those used in the 1986 questionnaire.

In both surveys, the extent of flight anxiety was rated on a seven-point scale, with 0 indicating “not afraid at all” and 6 indicating that they “never fly because of flight anxiety.” Ranks of 4, 5 and 6 were considered to indicate potential flight phobia.

The percentage of respondents who said they never fly because of flight anxiety decreased to 0.5 percent in the 2015 survey, down from 5.2 percent in 1986.

A separate five-point scale allowed respondents to assess their use of alcohol and tranquilizers during flight, with rankings ranging from “no use at all” to “always use a lot.”

The use of alcohol or tranquilizers was similar in the two surveys, with alcohol used by 11 percent of passengers in 1986 and by 8 percent in 2015, the report said. Three percent said that they used tranquilizers during flight in 1986, and 2 percent said the same in 2015.

An 11-point scale was used to measure nine “assumed concerns” during flight, including, in 1986, turbulence, engine trouble, “enclosement” and collision in the air. In the 2015 survey, several topics were added, including terrorist acts, unknown sounds, landing gear failure, pilot loss of control and personal loss of control. In both surveys, the assessment scales ranged from 0, which indicated “no anxiety,” to 10, indicating “maximum anxiety” (Table 2).

Among the concerns that could be directly compared, women were less concerned about engine trouble and midair collisions in 2015 than they had been in 1986 and slightly more concerned about enclosement. Men became more fearful of enclosement by 2015 and less fearful of midair collisions; the percentage of men who feared engine trouble was unchanged.

Researchers expressed regret that they were unable to compare the fear of terrorist acts; the topic was not included in the 1986 survey, which occurred two years before the Dec. 21, 1988, bombing of Pan American World Airways Flight 103 over Lockerbie, Scotland, that killed all 259 people in the Boeing 747 and 11 on the ground.3

Respondents also were asked to assess the extent of their anxiety in five situations unrelated to flying — “big gatherings, enclosement, traveling by bus/train, walking across open spaces, and great heights, as these are situations that commonly may cause anxiety without necessarily being related to flight anxiety,” the report said.

Differences in the prevalence of the other specific fears cited in both the 1986 and 2015 surveys were not considered statistically significant, the report said.

The study did not allow for any formal diagnosis of flight phobia, in part because the data were developed from self-reported information and not validated by physiological methods such as measurements of blood pressure, heart rate and sweat, the report said. The document suggested that additional research should incorporate a more thorough diagnostic tool for flight phobia, including the assessment of those and other physiological conditions during flight.