An SMS is a defense against safety pathogens, but not a cure. 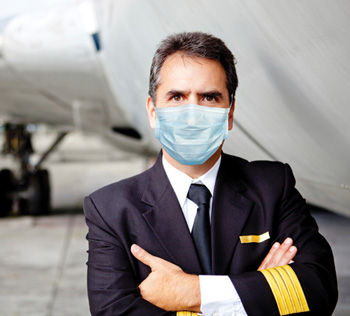 The safety implication for each of these actions is clear. Although they ended without incident, the outcomes could have been much different, especially for the first two. In each of these examples, the pilot committed a violation. A violation is different from common everyday errors in that the violator is aware of, and consciously chooses, his or her intended action. In contrast, everyday errors are beyond the awareness of the erring individual. While both violations and everyday human errors can be problematic, violations are worth increased scrutiny due to their possible relationship to the organizational culture. Determining whether the violations are occurring as individual aberrations, or are part of a broader cultural manifestation, is key to the corrective process.

In the human body, pathogens can be defined as disease-producing agents. Organizations such as flight departments can have their own “safety disease” pathogens.

Depending on the size of the company, the dynamics of cultural pathogens may vary considerably. For instance, in a very small charter operation, where the owner also flies as a line pilot, the potential pathogens may be “right in your face.” I once knew an owner-pilot who explained to me that “you think differently when it’s your personal wallet attached to the throttles.” This comment was in response to my question about why he made an overweight takeoff (the fuel was a few cents a gallon cheaper than at the destination airport).

On the other hand, in larger operations, there may be more levels of separation between upper management and line pilots. In these cases, the pathogens may have a longer trajectory to reach the line pilots, but, perhaps beneficially, there may be multiple opportunities for mitigation or even elimination (i.e., James Reason’s Swiss cheese model).

A pilot flew an airplane with inoperative radar through a line of convective activity.

The company had a documented history of flying aircraft contrary to its minimum equipment list (MEL). Over time, this became a company norm (everyone was doing it), and pilots were in fact encouraged to “overlook some of the minor MEL issues in order to keep their paychecks coming.”

Result: The pilot committed a routine violation (everyone does it all the time) as a result of a cultural pathogen.

A pilot continued an unstable approach and touched down halfway down the runway.

This pilot was highly experienced, with over 10,000 hours of flight time and more than 2,500 hours in type. The company was proactive about safety and required the pilots to attend an annual refresher course on approach and landing accident reduction. On this particular approach, the pilot was being pressured by the passenger to land even though the weather conditions were unfavorable due to reported wind shear. However, during the approach, the high-profile passenger told the pilot that he would “take good care of him” if he could assure an on-time arrival. The pilot succumbed to this incentive and consequently made an unsafe landing decision.

A pilot exceeded an aircraft operating limitation by intentionally deploying the spoilers with the flaps extended while airborne, which violated the manufacturer’s instructions for that model.

This pilot had a known history of exceeding aircraft operating limitations. The company was aware of it but did not act because the company’s position was that the pilot “always got the job done, and he was reliable.” The pilot himself felt that aircraft operating limitations were always very conservative and that there was “plenty of wiggle room.”

Result: The pilot committed an optimizing violation (just for kicks), which was also considered a personal routine violation (committing the same violation regularly but not necessarily as part of a group norm). In this case there was a cultural pathogen compounded by a renegade employee with his own agenda.

A safety management system (SMS) can be considered part of the organizational immunization process. But an initial SMS vaccination is only the beginning. Just as with some human vaccinations, an SMS requires booster shots to fully develop its efficacy.

Booster shots would include, but are not limited to:

Conversely, if the SMS is just a “fill in the blanks” program or a “book on the shelf,” the system is going to be more susceptible to unmitigated pathogens.

In the first and third examples, the pathogens were propagated at the highest levels of the organization (the second was considered a one-time individual aberration). For some reason(s), these pathogens were allowed to penetrate the system and reach the pilots, who in turn activated them.

This company did not have a functional SMS in place. If it had, would it have guaranteed that these pathogens would have been contained? The answer is unequivocally, no. However, with a functional SMS, there would have been a higher level of monitoring (specifically in the proactive hazard identification and risk analysis area), which in turn might have identified these threats and inoculated the system. This is easier to do in the middle levels of the organization, where there tends to be something of a neutral boundary between the upper and lower levels of the organizational hierarchy.

What if, however, the pathogens originate at the very top of the organizational hierarchy and the SMS is not, in reality, reaching this level? In this situation, upper-level management, including the CEO, are clearly focused on revenue at the expense of safety. They are purely reactive (thinking “we’ll deal with it if we have an accident”). They will do whatever it takes, at any cost, to top the competition. How would you, as the safety manager, change that mindset and make upper-management truly listen, buy into, act upon and support the SMS and its requisite generative safety culture? That has been one of the most vexing questions in the SMS implementation process.

Robert Baron, Ph.D., is the president and chief consultant of The Aviation Consulting Group and an adjunct professor at Embry-Riddle Aeronautical University. As a consultant, he has assisted aviation organizations in the development of their human factors, SMS, crew resource management and line-oriented safety audit training programs.