The occupants of a BO105 survived the crash but drowned in icy Canadian waters before they could be rescued. 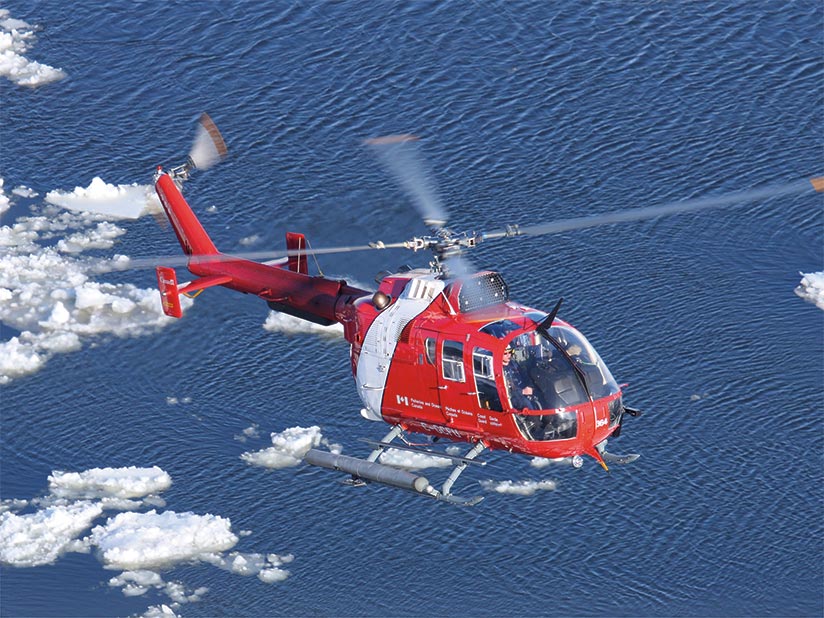 The Canadian Coast Guard’s Messerschmitt-Bölkow-Blohm BO105 S was being flown between 23 and 39 ft above the M’Clure Strait in the Canadian Arctic on a 2013 ice-measuring mission when, investigators believe, the pilot “experienced a lack of the visual cues required to judge altitude” and the helicopter descended into the freezing water.

The pilot and his two passengers — a scientist and the master of the Coast Guard ship serving as the helicopter’s operating base — evacuated before the helicopter sank upside down in 458-m (1,503-ft) deep water but drowned before rescuers arrived less than an hour and a half later.

The Transportation Safety Board of Canada (TSB), in its final report on the Sept. 9, 2013, accident, said that although its investigation was hampered by the helicopter’s lack of a cockpit voice recorder and flight data recorder, investigators nevertheless determined that there was a “strong probability” that the pilot lost visual cues to altitude, possibly because of a distraction.

The accident occurred on the fifth day of the pilot’s 42-day assignment to the Canadian Coast Guard Ship (CCGS) Amundsen, which left Resolute Bay in Nunavut on Sept. 6, carrying 73 people on the second leg of the ArcticNet Beaufort Regional Environmental Assessment research program, which is studying the effects of climate change and modernization on the Arctic marine ecosystem. The plan was to travel west along the northern shore of Banks Island in the Northwest Territories and then to turn south along the island’s western coast, measuring the thickness of the ice and determining the best route to a scientific station west of the island.

The helicopter took off from the CCGS Amundsen at 1638 local time. Data obtained from the helicopter’s flight following and satellite communications system — retrieved from the wreckage — showed that the flight was conducted in three legs.

“That was the last recorded message from the pilot,” the report said, noting that the helicopter leveled at 36 ft at 1739 and, “for a period of three minutes and 30 seconds … maintained an altitude varying between 23 and 39 ft. It then made a slow descent for 13 seconds before colliding with water at 1743:02.”

At 1805, 27 minutes after the pilot’s last radio transmission, flight following system data showed the helicopter 3.2 nm (5.9 km) west of the CCGS Amundsen; the crew did not notice that the position report bore a time stamp of 1741 and that it did not update as expected. Attempts to contact the pilot failed, and at 1824, the ship began heading toward that location. Its path was blocked by ice, however, and Royal Canadian Air Force rescuers were called into the search.

Floating debris was seen at 1847, followed by the sighting seven minutes later of the bodies of two of the helicopter’s three occupants. The third body was found 20 minutes later.

The pilot held a Canadian airline transport pilot license–helicopter, with an instrument rating and eight type ratings, including one for the MBH5, the designation for the BO105. He had 10,218 flight hours, including 3,100 hours in MBH5s. He had begun flying for Transport Canada — the operator of the Coast Guard helicopter — in 1985. His most recent proficiency check on the MBH5 was in October 2014, and his underwater egress training was in September 2011; both were valid at the time of the accident. He had completed several overwater flights and ice patrols, and his logbook showed that his last ice-measurement flight using an ice probe — “a forward-facing boom [attached to the helicopter’s nose] … which housed a laser altimeter and sensors for measuring the depth of snow and ice” — was in 2010.

The report said there was no indication that his conduct of the accident flight was affected by fatigue or by any physical ailment.

The accident helicopter, a light twin-engine helicopter, was manufactured in 1985 by Messerschmitt-Bölkow-Blohm, which in 1992 became part of Eurocopter and in 2014 was renamed Airbus Helicopters Deutschland. It had accumulated 8,866 flight hours, including 2,095 hours since a major airframe inspection in May 2007 and 91 hours since a 100-hour inspection in April 2013. It was flown by the pilots of the Transport Canada Aircraft Services Directorate (TC ASD) and maintained by TC ASD maintenance personnel. Technical records indicated no outstanding maintenance issues.

The helicopter’s flight following and satellite communications system recorded flight data showing that the helicopter had completed five low-altitude survey runs of seven to nine minutes each and had begun a sixth run of about three minutes, which was interrupted by the impact with the water. Two-thirds of the 65-minute flight were spent at altitudes between 13 and 30 ft above the surface, the report said. Just before the accident, groundspeed averaged 67 kt. The data showed a descent rate of 166 fpm in the last 13 seconds of flight.

The report said that accident investigators determined that the onset of the accident was sudden, noting that the pilot made no distress call and did not activate the flotation system, an emergency switch on the flight following system or the ELT, and that there was no problem with the helicopter that would have required the pilot to land immediately or caused loss of control and a crash. Information from the ship’s automated weather observing station around the time of the accident led investigators to conclude that visibility probably was unrestricted, the report said.

The report noted that controlling altitude during low-level flight “requires adequate visual cues to accurately judge the height of the aircraft over the ground or water. Difficulties can arise from either a lack of visual cues or misleading visual cues, which result in visual illusions. A lack of visual reference as the aircraft was flying over an area of open water is consistent with the facts of the occurrence and cannot be ruled out.”

In a 2009 risk assessment, the operator had concluded that “the risk level associated with a controlled flight into terrain (CFIT) was determined as high,” in part because of the possibility of distraction caused by any mechanical malfunction or a “lapse in concentration for any other reason,” a loss of situational awareness because of the absence of visual cues to help determine aircraft attitude, and “failure to recognize a pressure ridge1 in the ice due to less-than-ideal visual cues or momentary distraction.”

Because of the risks, the Specialty Operations Catalog (SOC) — the document that discussed the requirements of ice-measurement operations — initially limited low-altitude flying to short periods of time, typically five minutes, but the time limit was increased in 2010 to 15 minutes, the report said. No new assessment was performed to determine the risks associated with the new time limit.

“Since 66 percent of the 65-minute flight was spent at low altitude, it is possible that the pilot’s concentration was reduced to a point that the shallow descent was not recognized in a timely manner to prevent the impact,” the report said. 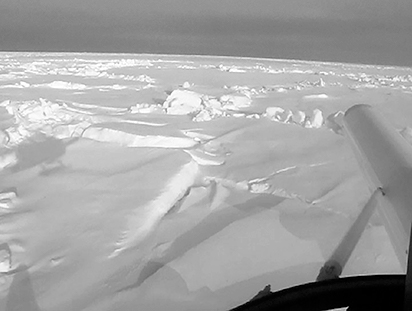 The helicopter departed from the CCGS Amundsen at 5,268 lb (2,390 kg), within the weight limit for normal operations but above the 4,850-lb maximum gross weight for low-level ice survey operations; that played no role in the accident, the report said. The document added that, because the pilot’s last previous ice-measurement mission was in 2010, he might have forgotten about the special weight limitation. In addition, “there was no evidence that the pilot had undergone initial or recurrent training, as per the SOC, which would have served as a reminder of all the limitations,” the report said. There also was no indication that he had reviewed the SOC before the flight, the report said.

The accident investigators’ review of video and still images found in the wreckage showed that visual cues and light levels varied considerably.

“Transitioning to flying over open water would have resulted in a sudden and significant reduction in visual cues available to judge height,” the report said. “This would have been particularly true in calm wind or if a skim coat of ice was present on the water.

“The loss of references in the near visual field would have required the pilot to increase the scan of other available cues (distant visual field and instruments) in order to detect any change in altitude. Given the low altitude of the flight, this transition would have needed to be very quick, as a momentary loss of orientation could have resulted in contact with the surface. In addition, the dark overcast sky ahead would no longer have provided the distinct line of horizon against the water that would have been present when flying over the ice surface. Therefore, a pitch attitude change would have been difficult to recognize.”

The helicopter’s shallow descent path would have been especially difficult to recognize, the report said, noting that the pilot probably experienced “a lack of the visual cues required to judge altitude, which led to … CFIT.”

All three helicopter occupants survived the impact with the water, as noted, but died before rescuers arrived because of the effects of exposure to the cold water, the report said, noting that total incapacitation occurs after 10 to 20 minutes in 0-degree C (32-degree F) water.

The report cited a number of problems that complicated their chances of survival:

The report said that the occupants were in the cold water “long enough to cause considerable, if not complete, cold incapacitation, which would have made it impossible for them to maintain their airway above the water line while not wearing a [personal flotation device] or while wearing one that was improperly inflated.” However, drowning might have occurred as early as during their evacuation from the helicopter, the report said.

In the weeks after the accident, the TC ASD issued Pilot Information File RW 2013-08-HQ, reminding Coast Guard helicopter pilots of the hazards of low-level flights and the associated TC ASD recommendations. Other actions included reviews of shipboard operating procedures by pilots, ship masters and first officers; inspections of life vests to ensure that they had been folded properly; distribution of new immersion suits; and introduction of new helicopters equipped with automatic float deployment, externally mounted life rafts and new cockpit voice and flight data recorders.

The Coast Guard ordered changes calling for a ship’s crew to use the flight following system to verify a helicopter’s position every five minutes and requiring use of an authorized immersion suit with thermal protection by passengers in Coast Guard helicopters involved in Arctic operations whenever the helicopter was expected to fly over water with a temperature of 13 degrees C (55 degrees F) or lower and in certain other conditions. 