From Bad to Worse 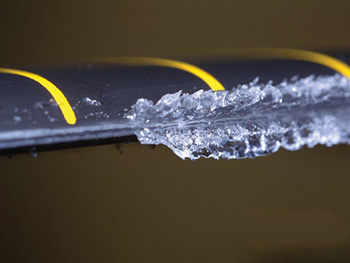 “The natural phenomenon of in-flight icing can affect aircraft in several different ways,” Littman said during his presentation at the World Aviation Training Conference and Tradeshow (WATS 2012) in Orlando, Florida, U.S., in April. “Any aircraft will collect ice if flown slowly enough in icing conditions with the protection turned off, disabled or absent. If you do get ice, particularly on the wings, upsets can be abrupt and surprise the flight crew. It is [only the in-flight] ice on the leading edge of the wings that causes a stall. … If your airplane is certified for flight in known icing — and [you] use the equipment when it needs to be used — you’ll never see any of this. But if your airplane is not certified for flight in known icing and/or your ice protection is turned off or disabled, then watch out. … The trouble with ice is what it does to the [airflow], not the weight that it adds.”

Robust icing models can be used to increase pilot awareness of operating in icing conditions — preferably in a brief scenario — but historically, models were hampered in that they considered mainly the weight of accreted ice. The weight now is regarded as a negligible/secondary issue in large transport airplanes, he said. “If you throw [the relevant data] together, and you say there is a 3.0-in (7.6-cm) coating of ice across the entire cross-sectional area of a [Boeing] 737-800, it would weigh 403 lb [183 kg],” Littman said. “That is 0.26 percent of the maximum takeoff weight [of 155,500 lb (70,533 kg)].”

Although in-flight icing has been recognized as more of a threat to smaller aircraft, all flight crews must be familiar with managing the risk. Two properties of ice normally create the principal hazards.

“Accretion rate of the ice is certainly important,” Littman said. “However, it is the quantity, shape and location of the ice on the aircraft which determine the severity of the effects. … The drag can increase, which is the retarding force on the aircraft in flight. The thrust can decrease. The stall speed increases. The controllability can be degraded, particularly for aircraft that have manually powered flight controls. And sensors can become inoperative; this was a contributing factor in the case of Air France [Flight] 447 (ASW, 8/12, p. 14).”

Large commercial jets are the airplanes least susceptible to in-flight icing. “They cruise above icing conditions most of the time,” he said. “They fly at higher airspeeds and … the faster [airplanes] go, the colder the air has to be for [them] to collect any ice at all. The large radii of their [airfoil] leading edges means they have a low collection efficiency; they are just simply not as prone to pick up ice. …They have big engines, which in most cases have lots of excess thrust, which can generate lots of power to run all kinds of powerful ice-protection systems. So [for them, in-flight icing is] just not really a problem if the aircraft is being operated correctly.”

The prerequisites for in-flight icing to occur are a collecting surface and suspended liquid water — or supercooled droplets — that are both colder than freezing. The severity of ice accretion is determined by several factors, which can be listed in order of significance. The amount of liquid water suspended in the atmosphere through which the flight crew is flying and the temperature of the air rank first. Next, Littman said, are “the droplet-size spectra, that means on average, how big are the droplets? Are they large? Are they small? Is it a uniform mixture? [Then] true airspeed, how fast are you flying through this? The collection efficiency of the surface, which refers mainly to the radius of the leading edge of whatever part of the aircraft you’re talking about. Lastly, when the ice does accrete, how much? What is the shape? And how rough is it?”

The location, shape and roughness “affect different parts of the aircraft in different ways, whether it be airframe components or the engine air inlets or the propellers (if it has propellers) or the sensors,” he said. For brevity, his description of effects was limited to some flying surfaces.

Pilot training typically groups in-flight icing into categories of “rime ice, where the air tends to be colder and the droplets smaller; clear ice [also called glaze ice], where the air tends to be closer to the freezing mark [0 degrees Celsius, 32 degrees Fahrenheit] and the droplets are larger; and then a special condition we call supercooled large droplets or SLD,” Littman said. “In reality though, icing tends to be a continuum with rime [ice] at one end of the spectrum and clear [ice] at the other.”

FlightSafety International’s simplified terminology for training reinforces the relative threat from each category. “[We] call [rime ice] the ‘bad ice,’” he said. “Clear ice, on the other hand, I would call ‘hazardous.’ It can seriously degrade the aerodynamic performance of the aircraft. … [SLD] is a rare condition [defined by U.S. authorities as droplets larger than 40 microns in diameter]; it is the most dangerous form of icing. … In SLD conditions, ice can form aft of protected areas. This can result in unforeseen effects.”

Some previous attempts at icing scenarios in simulators have lacked realism. “[In] legacy simulations in the not-so-distant past, icing effects were represented by huge and unrealistic weight increases … that just isn’t the case,” Littman said. “[Original equipment manufacturers’] data for simulation of icing effects, particularly for smaller aircraft, have sometimes been inconsistent or nonexistent — and the simulation effects are usually pretty benign.”

In response to audience questions, Littman acknowledged continued difficulties obtaining a complete in-flight, icing-effect data set for some simulators, typically those for the smaller aircraft used in commercial air transport and business aviation.

He also agreed that strong precautions to prevent negative training in simulators about this subject must be in place. “I didn’t have time to talk about tailplane icing or aileron snatch, such as befell the ATR[-72] over Roselawn, Indiana [U.S.], in 1994 because those topics get a little bit involved,” he said. “[Negative training] is an issue — which led me to try and come up with something to address it. But there’s still more work to be done.”

His company’s design philosophy aimed for what he called a new and improved aircraft icing model. “There are a large number of difficult-to-predict [atmospheric] variables,” Littman said. The development strategy has been to move away from a top-down, cause-to-effect simulation concept in which specific data inputs to the flight simulator, defining ice accretion on a percentage scale, would produce only a generic result for a selected intensity.

Using one of these two selectable intensities in the model, the time allotted for the selected effects in the in-flight icing simulator session can vary between five minutes and 20 minutes. “Anything less than five minutes is just really too fast to be the least bit realistic,” Littman said. “Anything more than 20 minutes is probably too long to be used in a training session. So yes [in reality], you can get ice in less than five minutes, and it can accrete for longer than 20 [minutes], but in terms of bounding it for a training session, we chose that range.”

Evaporative cooling effects in high humidity tend to lower the temperature required before supercooled droplets will freeze on a surface with a temperature below freezing. The icing effects in the simulator, therefore, ideally should reflect the quantity of ice accreted on the specific component, but few simulations currently account for this. “The model’s [lift coefficient] curve also includes the effects of evaporative cooling at 100 percent relative humidity,” Littman said. “Icing usually occurs in a cloud. … Also, the maximum outside air temperature for ice accretion is a decreasing function of true airspeed. The faster you go, the more aerodynamic heating you get because of friction against the air, and that means that the air has to be colder before you can actually get icing.”

These training scenarios occur in visible moisture at or below 22,000 ft pressure altitude. “The chances of icing occurring above that altitude are pretty small because there is just not that much water in the air above 22,000 ft,” he said. “Leading-edge ice causes early flow separation on the wing upper surfaces, and the angle-of-attack increases. It results in a reduction of the maximum lift coefficient [CLmax]; in other words, the maximum lifting efficiency of that wing is reduced when you have ice on the leading edge. The effect of that is that the stall speed goes up. … [However,] ice on the leading edge usually has little effect on the lift prior to the stall.”

Graphs of the data showed that in the most severe in-flight icing condition simulated — about 22 minutes of clear ice accretion — the wing’s CLmax deteriorates to about 0.65. For the bad ice/rime ice condition, CLmax is just below 1.0. By comparison, a clean wing — that is, one free of ice contamination — attains a CLmax of 1.33 in the tables integrated into the simulation.

The simulation overcomes the former benign portrayal of practical consequences. “The stall, when the wing has accreted ice, will tend to be abrupt and asymmetric … because the ice is not going to be uniform across the span of the wing,” he said. “It’s almost a 100 percent chance that one wing will [stop generating lift] before other one does because the shape won’t be exactly the same all the way across. When it does let go, it is going to tend to let go quickly. The stall warning system may not necessarily provide — and in many cases does not provide — advance notice of an impending stall with ice on the wing.”

The simulation also now reflects that in-flight icing has much less effect on a wing with an extended leading-edge device. “So, in a simulator, you might have ice accreting on one or both wings; the leading-edge devices would be retracted or not there at all,” Littman said. “For 50 percent icing … the [CLmax] is reduced by 20 percent. That [results] in a 12 percent stall speed increase. … For 100 percent icing, CLmax is reduced by almost half, which means the stall speed goes up by 39 percent. …When you get to the stall, there [will] be a pronounced wing drop because that is what will most likely occur in the real world if this happens.”

Drag caused by ice on the wing varies with angle-of-attack. “Ice on the wing affects drag at any angle-of-attack, more so at higher angles,” Littman said. “Also, drag on the aircraft can increase when there is ice on components other than the wing. The simulator model should apportion the drag increases among the airframe components according to their various ice-protection states. In other words, ‘Is the ice protection turned on? Is it turned off? Is that part of the aircraft protected at all?’” Relevant icing-effect data (Figure 2) also show that at the 100 percent/hazardous condition, the drag increase is “much higher, much sooner” as the angle-of-attack increases, he said.

Several of FlightSafety International’s icing simulations currently represent the drag this way. The data sets include the relative drag contributions when ice accretes on the fuselage, the horizontal tail, the vertical tail and/or the extended landing gear. “It becomes very apparent,” Littman said. “You have to really add lots of thrust just to keep it flying when you get to the 100 percent ice condition.”