The pilot of an EC130 sightseeing flight and all four passengers were killed after the helicopter struck a Hawaiian mountainside. 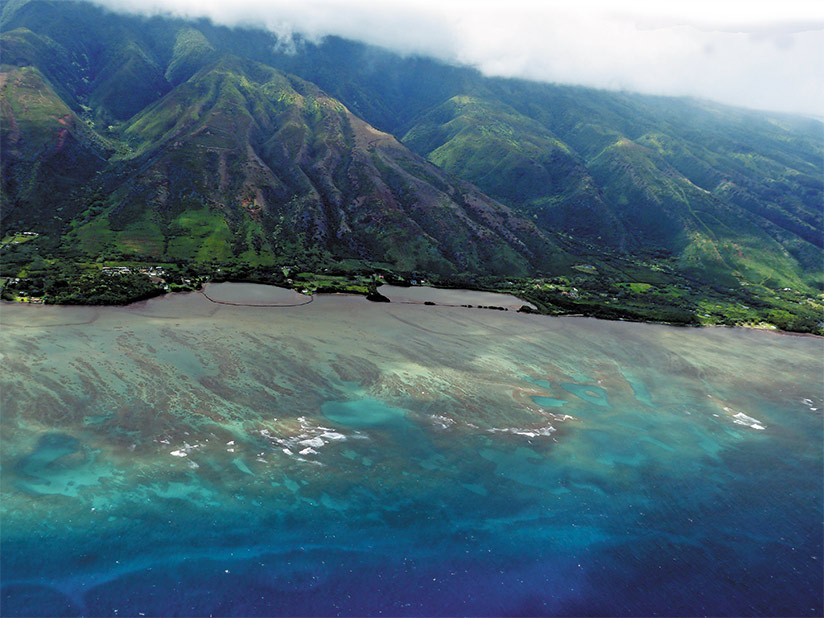 An air tour pilot’s decision to fly into an area of rising Hawaiian terrain and low clouds led to the 2011 crash of a Eurocopter1 EC130 B4, which killed the pilot and all four of his passengers, the U.S. National Transportation Safety Board (NTSB) says.

In its final report on the Nov. 10, 2011, accident, issued in late July, the NTSB said the probable cause was the pilot’s “failure to maintain clearance from mountainous terrain while operating in marginal weather conditions.” The horizontal stabilizer and the lower forward portion of the fenestron (the shrouded tail rotor) struck either the ground or vegetation as the helicopter flew along a ridge leading from the center of the Hawaiian island of Molokai to lower land near the shoreline, the report said. The impact separated the fenestron from the helicopter, and as a result, the pilot lost control of the helicopter, the report added.

The accident flight — the pilot’s third flight of the day in the accident helicopter — began at 1144 local time, when it departed from Kahului Airport on the neighboring island of Maui. The flight was scheduled to last 70 minutes, traveling north-northwest over Maui and across the channel to Molokai to view two waterfalls. If weather conditions were acceptable, the helicopter was to proceed to the Wailau Valley and over the valley wall to the southern part of Molokai; the alternate route called for the pilot to reverse course to Molokai’s northern shoreline and then continue around the eastern tip of the island to the south.

Visual meteorological conditions prevailed when the helicopter departed, but other air tour helicopter pilots operating around Molokai at the time of the accident said that weather conditions would have precluded flight through the Wailau Valley. They said that they had seen the accident helicopter and talked by radio with the pilot several times during the flight.

The last pilot to see the accident helicopter said that it was flying west in straight and level flight above the mountains and just below the cloud base — reported by the pilot at 2,000 ft mean sea level (MSL) — on the southern side of the island, and “did not appear to be in any form of distress,” the report said.

The witnesses on the ground said that weather conditions at 1214 local time, when the accident occurred, were poor, with rain in the area. Several said that the accident occurred between rain squalls, and one said that it had occurred during a heavy squall. One witness said the wind, which he estimated at 45 kt out of the northeast, was stronger than usual in that area and that it shook his house. Another said he could see that, in the mountains, “it was very dark and rainy, with limited visibility,” the report said.

Before starting work in July 2011 with Blue Hawaiian Helicopters, he had flown Bell 407s and 206Bs for Bristow International Helicopters in the Gulf of Mexico. When he started the job at Blue Hawaiian, he had 4,500 flight hours, with no time in EC130 B4 helicopters. His initial company training included ground and flight training in the EC130 B4, and he accumulated 306 flight hours in type during his months with the company.

The day before the accident, he completed a U.S. Federal Aviation Regulations Part 135 check ride and was characterized by the Federal Aviation Administration (FAA) principal operations inspector as “capable and current in all of his required pilot tasks and training,” including instrument navigation, inadvertent entry into instrument meteorological conditions and unusual attitude recovery.

The morning of the accident flight, the pilot arrived at his usual starting time of 0730, checked the weather and conducted two sightseeing flights without incident.

The accident helicopter — an eight-seat, single-engine helicopter with a Turbomeca Arriel 2B1 turboshaft engine and a three-blade main rotor — was manufactured in France in 2010 and received an FAA airworthiness certificate the same year. On Nov. 8, when the most recent 100-hour inspection was completed, it had accumulated 2,431 hours. During that inspection, maintenance personnel performed Eurocopter Emergency Alert Service Bulletin 53A019, which called for a check of the tail boom/fenestron junction frame for cracks; no defects were found, the NTSB report said.

The helicopter was equipped with a Garmin G500H electronic flight display system that included a primary flight display, multi-function display, air data computer and altitude heading reference system, along with a synthetic vision technology system that offered the pilot a moving map with a “three-dimensional view of terrain and obstacles with visual and audio alerts for terrain or obstacles,” the report said.

The helicopter was not required to have a cockpit voice recorder or flight data recorder, and it did not.

It was equipped with four color cameras — three mounted on the helicopter’s exterior and one mounted internally — that were controlled by the pilot with a four-way switch on the cyclic. The cameras were used to record video for passengers as mementos of the flight; they also were reviewed by the operator “for the purpose of operational quality control,” the report said. However, the camera system was not designed to withstand a crash, and the recordings of the accident flight were destroyed in the post-crash fire.

The operator is a Part 135 air carrier authorized by the FAA for on-demand air carrier operations. At the time of the accident, Blue Hawaiian operated Eurocopter AS350s and EC130 B4s, which were flown under day and night visual flight rules. Flights under instrument flight rules were not permitted.

The pilot of another air tour helicopter, which departed from Maui for a sightseeing flight around Molokai a few minutes before the accident helicopter, told investigators that cloud bases around Molokai were about 2,000 ft MSL and that visibility was “great” below the clouds and away from the heavy rain. He added that conditions deteriorated throughout the morning, however, with a strong wind from the northeast and “fast-moving” rain squalls. At one point, while flying near the accident area, “he had experienced many updrafts, downdrafts and microbursts, to the point that it scared him,” the report said.

He was the last pilot to see the accident helicopter, which was heading west, just below the clouds, along the south side of Molokai’s central mountain ridges.

The pilot of another air tour helicopter said that shortly after he heard about the accident, he observed that weather near the site was “really poor,” with heavy rain. He landed his helicopter in a schoolyard and waited about five minutes until the weather improved, then flew to survey the accident scene.

That pilot told accident investigators that radar and pilot reports were the best sources of weather information for the area. Information in the NTSB’s accident docket quoted him as saying that the island did not have enough weather stations and that weather conditions could “change dramatically from where the stations are to … the other side of the island.” The morning of the accident, he said, conditions shifted about every 15 minutes, alternating between visual meteorological conditions and heavy rain with low visibility.

Area forecasts in effect for Molokai at the time of the accident called for surface winds from the east-northeast at 25-30 kt over mountain ridges and through valleys, scattered clouds at 2,500 ft and a broken ceiling at 4,500 ft; a forecast issued about 30 minutes before the accident said that in isolated conditions, ceilings would be broken at 1,500 ft, with visibility at or below 3 mi (5 km) in heavy rain showers and mist. An airman’s meteorological information report (AIRMET) that was in effect at the time of the accident called for moderate turbulence below 10,000 ft above the mountains throughout Hawaii and in areas to the south through west.

The NTSB report said that the helicopter struck terrain in the mountains about 5 mi (8 km) west of Pukoo, Hawaii, at about 530 ft MSL on a north-south ridgeline near an area of thorny trees and other vegetation. The report said the ridgeline was one of several that runs from the mountaintops near the center of Molokai to lower elevations near the shore.

“The combined loading from the horizontal stabilizer and the fenestron’s impact with vegetation and/or terrain caused the stress in the forward flange of the junction frame to exceed its ultimate design strength. The forward flange of the junction frame fractured, which allowed the fenestron to separate from the tail boom. The torque input from the tail rotor drive shaft caused the separated fenestron to rotate counterclockwise, which drove the lower portion of the fenestron into the main rotor disc, where it was impacted at least three times on the left side. After the fenestron separated from the tailboom, the helicopter lost yaw control and its center of gravity shifted forward, which caused it to become uncontrollable.”

The report noted that the four accidents involved varying circumstances:

This article is based on NTSB accident report WPR12MA034 and associated docket material.