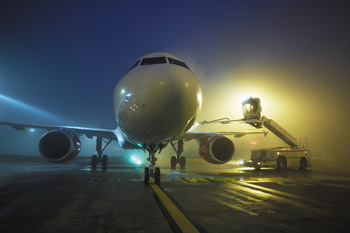 Their documents underscore the addition of newly approved fluids, the removal of obsolete fluids, changes in approved water dilutions and the effect, if any, of such changes on generic HOT table values. Most airport service providers and regional airlines in Europe, for example, have preferred deicing/anti-icing systems combining relatively low cost and HOTs that are suited to diverse airport environments in which frost is more prevalent than the ice/snow contaminants common to the United States and Canada.2,3

According to SAE, approved Type I fluids are “generally used heated, either diluted with water, or as supplied, for the removal of, and time-limited protection against, deposits of frost, ice and snow on exterior aircraft surfaces prior to takeoff.” The approved Type II, Type III and Type IV alternative fluids comply with one of the SAE specifications for non-Newtonian fluid, also called pseudoplastic fluid, which contains thickeners to improve HOT compared with Type I fluids. In a 2008 article, subject matter specialists from Europe told ASW that Type II and Type IV fluids are formulated primarily for anti-icing, keeping airplane surfaces free of frozen contaminants before takeoff, and also are approved for deicing.

Eurocontrol’s SKYbrary website describes AEA, FAA and TC as “the main practical sources of HOT information,” adding that “each issues [its] own version of the HOT tables and associated support publications independently of each other and SAE. The generic changes from one season to the next are usually relatively few. However, in recent years, issues with residues from thickened fluids have been the main driver for the appearance of product-specific HOT tables, which are increasingly used by operators.”4 Moreover, advisers to SKYbrary have identified, as a winter operations risk factor, the fact that other organizations publish HOT tables less frequently than AEA, FAA and TC. This leads to situations in which aircraft flight manuals go out of date relative to international best practices and safety knowledge (see “Generic Reminders”).

Beyond differences highlighted by the U.S. Federal Aviation Administration (FAA) in its holdover time (HOT) tables and guidance for winter 2014–2015, this official document — similar to those issued by the Association of European Airlines and Transport Canada — reiterates safety reminders critical to airport ­deicing/anti-icing service providers, aircraft operators and flight crews.

For example, the FAA cautions this community that fluids used during deicing/anti-icing do not provide in-flight icing protection. A cautionary note on tables warns, “This table is for departure planning only and should be used in conjunction with pre-takeoff check procedures.” Another reminder is that although U.S. air carriers may have approval of their winter operations plan for using handheld electronic devices for HOT/allowance time determinations, unreliable accuracy or failure of such devices requires reversion to the official HOT tables as backup.

The document adds, “The time of protection will be shortened in heavy weather conditions. Heavy precipitation rates or high moisture content, high wind velocity or jet blast may reduce holdover time below the lowest time stated in the [HOT table] range. Holdover time may be reduced when aircraft skin temperature is lower than [outside air temperature].”

A related Eurocontrol concern is assuring the safe performance of new devices that measure precipitation rate in real time and make the data available for flight operations. In this case, SKYbrary’s advice says, “These systems, referred to as liquid water equivalent systems (LWES), can be used by check-time determination systems (CTDS) and holdover time determination systems (HOTDS) to calculate more precise holdover times than can be obtained from the HOT tables. They do this by using the weather data they collect as the input to the underlying assumptions employed in calculating the times in the HOT tables.”

This article cites only the Official FAA Holdover Time Tables, Winter 2014-2015, Revision 1.1 — published Oct. 22, 2014 — which contains agency guidance, holdover tables and allowance times for use during this season. The document states, “It is the responsibility of the end user to periodically check the following website for updates: <www.faa.gov/other_visit/aviation_­industry/airline_operators/airline_safety/deicing/>.”

Winter operations specialists will find new holdover/allowance time adjustments built into this season’s tables because of early fluid failure recently observed when the slats and flaps of test aircraft had been deployed prior to ­deicing/anti-icing. The change was based on research that found that the steeper angles of the flaps/slats in the takeoff configuration accelerate the flow-off degradation of fluids, with “the degree of potential degradation … significantly affected by the specific aircraft design.”

New guidance on airport surface visibility and snowfall visibility in relation to use of HOT tables also applies this season. “Whenever surface visibility is available from an official source, such as a METAR [aviation routine weather report], in either the main body of the METAR or in the Remarks (‘RMK’) section, the preferred action is to use the surface visibility value,” as opposed to tower visibility, if shown, FAA said. Operators are not permitted to apply runway visual range data for determining the visibility used with the HOT tables.

Although no changes were made to the standard table showing snowfall intensities as a function of prevailing visibility, FAA this season allows optional use of locally adapted summaries written by the operator. The guidance says that an air carrier’s winter operations plan simply could say, for example, “Since very light snow is being added to some of the Type II and Type IV [fluid HOT] tables, and since the METAR and the associated ATIS [automatic terminal information service broadcasts] do not report very light snow, a METAR-reported visibility of 2.5 mi [4 km] or higher can be used as an indication that the snowfall intensity is very light. An air carrier certainly would also have the option of providing a more detailed description utilizing lower METAR reported visibilities for specific day/night and temperature conditions.”

FAA policy on hail versus small hail, terms that are not equivalent in this HOT tables and guidance context, also is new. “No holdover times exist for either of these conditions; however, it has been determined that small hail is meteorologically equivalent to moderate ice pellets and therefore moderate ice pellet allowance times can be used in small hail conditions,” the agency said, pointing to relevant changes throughout the document.

Not all countries follow the World Meteorological Organization’s application of the METAR code GS to snow pellets and small hail, FAA found, adding that this creates a safety concern. “The use of the reported GS code can potentially lead to difficulties in determining which condition (snow pellets or small hail) is occurring and therefore in establishing the appropriate holdover time/allowance time,” the document said in providing updated guidance on which to term to use.