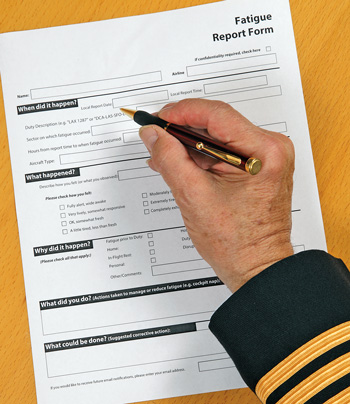 A system of anonymous, voluntary reporting of fatigue by pilots and flight attendants can be used to help identify and correct fatigue hazards that might otherwise remain unknown, according to a study of a fatigue reporting system at one airline.1

The study of approximately 309 pilots and 674 flight attendants2 at the short- and medium-haul airline from Sept. 1, 2010, to Aug. 31, 2011, found that the rate of fatigue-report submission among pilots was 103 reports per 1,000 persons; the rate among flight attendants was 68 reports per 1,000 persons. The report on the study — published in the August issue of Aviation, Space, and Environmental Medicine — did not name the airline, but all three authors were medical or crewing officials with BMI, British Midland International.

Data for the study were gathered from fatigue report forms (FRFs), which were submitted by pilots and flight attendants to provide information about fatigue-related work events.

“Crews were requested to complete an FRF if they stood themselves down due to fatigue, were unable to attend work due to fatigue, had a general concern about fatigue or a fatigue-­related safety event had occurred,” the report said.

The paper FRFs asked for information about the crewmember’s recent sleep and duty time, the time of day of the event and related “aspects of fatigue-related impairment,” the report said.

The study’s goal was to collect data to help identify fatigue hazards and fatigue mitigation strategies, the report said, adding that self-reporting of fatigue can identify problems that elude fatigue prediction modeling software.

Among the fatigue-related problems discovered through the self-reporting process were the quality of hotel accommodations, commuting distances between the airport and hotel or home, and the “hassle factor” associated with individual airport conditions or technical problems.

For example, the report said, several FRFs that cited “rostered duty pattern” fatigue were submitted by crewmembers on the Tehran, Iran, to London route. The FRFs said that “Tehran-London flight duty … [had] a high ‘hassle factor,’” the report said. “This resulted in a decision by the crewing manager to schedule days off following this particular trip.

“Several reports were received relating to the overnight London-Moscow-London flight, a long duty, which ends within the window of circadian low.3 A metric altimetry operation used within Russian airspace, novel to most flight crew, could increase their workload. A decision was taken to avoid scheduling this duty at the end of a [six-day] block of work.”

When an FRF was submitted, it was reviewed by the airline’s medical officer. His findings, along with the report, were forwarded to the crewing manager for an independent review. When both agreed that fatigue was the primary cause of the episode described by the crewmember, the FRF was assigned to one of five primary causal categories (see “Fatigue Categories”):

Category 5 — no obvious cause.

The study of crewmembers’ fatigue reports assigned each report to one of the five following primary causal categories:1

The categories were determined after a review of the results of a small-scale study conducted immediately before the main study, the report said, noting that the aviation industry lacks any standard for categorizing fatigue reports according to cause.

Analysis of the FRFs showed that 27 percent of reports were associated with the rostered duty pattern — more than any other category — and among them were the reports involving the flights from London to Moscow and Tehran. Operational disruption was cited for 24 percent, domestic for 23 percent, and layover accommodation for 17 percent. Nine percent of reports had no obvious cause or were considered “invalid,” in most cases because further investigation determined that the crewmember was ill rather than fatigued.

Fatigue reports that were linked to operational disruption included 10 reports submitted in December 2011 that cited heavy snow in the United Kingdom, the report said. “Many London airports were snow-closed, and crews found themselves delayed or stranded down-route,” the document added.

Of the FRFs with a domestic cause, most were associated with commuting to work, the report said. Most of the study participants drove to work, and information in the narrative section of the FRFs indicated that they experienced difficulty with “extraordinarily heavy traffic because of road closures, accidents or poor weather conditions” and that these problems resulted in longer commutes.

Other domestic causes of fatigue included childcare requirements that interrupted the crewmember’s rest, misreading a duty roster and a noisy neighbor.

The mean monthly report frequency was 6.5, although the number of FRFs filed each month ranged from one in August 2011 to 15 the previous month. The report traced the increase to the airline’s introduction in May of a new hotel for crew layovers; that month, the number of FRFs increased to 11, up from just two that had been submitted in April. Fourteen FRFs were submitted in June and 15 in July.

“There were problems with excessive noise caused mainly by wedding celebrations in the hotel grounds,” the report said. “There were nine reports citing ‘hotel noise’ as the cause for fatigue submitted during [May, June and July]. By the end of July, at the airline’s request, the hotel had installed double-glazing in the crew bedrooms, and no further noise reports were received.”

During the course of the study, crewmembers were reminded of the airline’s confidentiality and voluntary reporting protections, the report said.

“There must be the expectation that the information will be dealt with fairly and in the interests of safety,” the document added. “High reporting rates may indicate an organizational culture committed to identifying and reducing fatigue rather than a truly high [fatigue] rate.”