In Search of Healthier Boarding 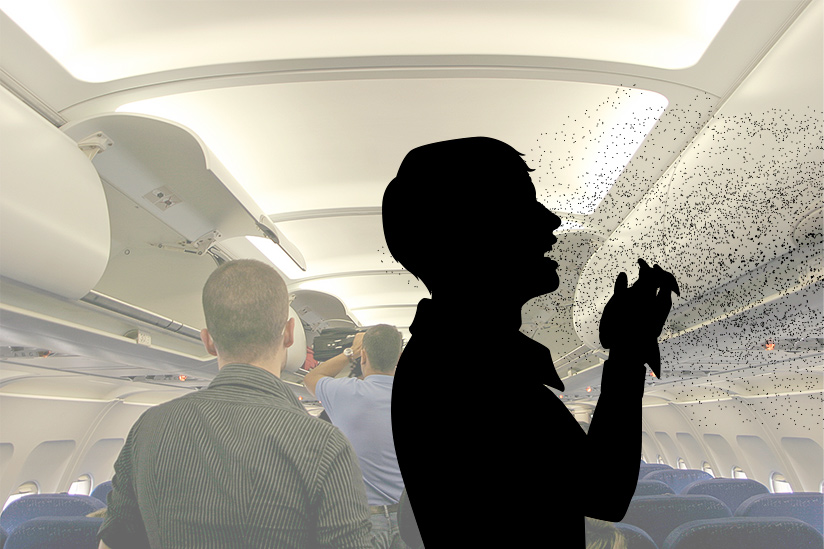 Methods used in boarding airline passengers could affect their health, according to a study that found that one typical method of boarding — filling the front seats first, followed by seats in the middle and rear sections — may increase the risk of transmitting infectious diseases.

A better method would be to board passengers in two groups whose assigned seats are scattered throughout the airplane, instead of three groups whose assigned seats are all in the same general area, said the report, published May 31 in Physical Review E, a journal of the American Physical Society and the subject of further discussion in statements issued in August and September by Arizona State University (ASU), Embry-Riddle Aeronautical University, and Florida State University, where the authors work.1

“There’s been a lot of boarding and deplaning research framed in terms of speed and efficiency, but we aren’t looking for efficiency — we’re looking to decrease the spread of disease,” said Ashok Srinivasan, associate professor of computer science at Florida State University. “It turns out that procedures that are generally good at getting people onto a plane very fast are also very bad at preventing infection.”2

In boarding areas, security lines, airplane cabins and anywhere else that travelers are in close proximity to each other, they are more susceptible to infectious diseases, the report said, citing previous studies that showed that diseases including influenza, tuberculosis, measles and norovirus (a form of stomach flu) have been transmitted within commercial airplanes.

A number of factors affect the transmission of infection in airplane cabins, including cabin air quality, exposure time, flight duration and passenger contact, the report said.

The report added that, although airplanes are equipped with high-efficiency filters that effectively reduce the spread of disease in recirculated air, “virus shedding from infected passengers before the air can pass through filters can lead to other passengers becoming infected.”

As a result, the report said, “passenger location and movement resulting in close contact between infective and susceptible populations is a critical component in infection spread aboard airplanes. Passengers move during boarding (ingress), deplaning (egress) and within the cabin. Susceptible passengers otherwise not exposed to the contagion may come into contact with it when they are in close proximity to infected passengers or contaminated surfaces during the high-mobility phases of passenger entry and exit.”

The researchers developed a computer model that considered how passengers move through an airplane and how infectious diseases spread. Ultimately, they focused on the Ebola epidemic of 2014–15, noting that, despite restrictions on travel, some travelers who were infected with the Ebola virus boarded commercial airliners in Nigeria and the United States.

The model, which assumed that one infected passenger was traveling on a commercial airplane, was used to simulate how the Ebola virus might spread, with special consideration given to how passengers were boarded and how they deplaned, as well as how large the airplane was. The seating location of the infected passenger was varied, with separate calculations for each passenger seat in the airplane; with each seating, researchers determined the average number of new infections.

“Unfortunately for current fliers,” ASU said in its discussion of the research, “the commonly used three-section boarding technique, where passengers board by first class, middle zone and back section, is actually the worst strategy for reducing the number of infected. The reason this works so poorly is that it forces passengers to stand together in the aisle while they all wait to get to their seats, which means more time for a tightly packed group to be exposed to the contagious passenger.

“The good news is that there are safer options.”3

In both random and two-section boarding, passengers who are close together in line are then separated and “may be seated in seats that are wide apart,” the report said. “This leads to arbitrary movement of passengers along the cabin, preventing clustering of a group of travelers around the infected passenger, which in turn reduces infection transmission.”

Srinivasan acknowledged that random boarding procedures are more time-consuming than the typical three-section boarding method, but added, “if passengers had to choose between getting Ebola and being seated a few minutes later, we suspect they’d prefer the latter.”

The study also examined deplaning but found that it “had a smaller impact on infection dynamics because of the lower number of new contacts and lower time of exposure during the comparatively faster process.”

In addition, varying patterns of deplaning — for example, alternating rows, alternating columns, zones and baselines (in which those closest to an exit are the first out) — all resulted in similar numbers of new infections.

In the case of Ebola, the report said, data from the U.S. Centers for Disease Control and Prevention show that a non-fatal infection lasts 21 days after a patient experiences the first symptoms and that the patient is most contagious in days three through five.

During the 2014 Ebola outbreak, there were three cases in which “potentially newly infected passengers” traveled on commercial flights, the report said. In one case, involving a passenger who flew on two commercial flights before being diagnosed with the Ebola virus, it could not be determined if he had symptoms and was infectious while he was traveling, but follow-up investigations found that he contributed to no further infections.

“According to our simulations, the probability of zero new infected cases is about 7 percent with a fully loaded flight,” the report said. “Note that there was a large number of vacant seats in one of the flights [taken by the ailing passenger], which would have increased this probability.”

When considering the size and seating capacity of an airplane, researchers found that passengers in smaller airplanes (for example, the size of a Bombardier CRJ-200, which can seat about 50 passengers) are less likely to contract an infectious disease than passengers on larger airliners.

“However, the advantage with smaller seating capacity of airplanes quickly vanishes as the number of seats increase beyond 150,” the report said. “The smaller size of the susceptible population, the lower number of susceptible individuals within a given contact radius and the reduced time of in-plane movement are some of the factors that benefit smaller airplanes.”

The report also noted that travel restrictions imposed during the 2014 Ebola outbreak limited the spread of the disease.

The authors cited earlier research that estimated that, without limits on travel, 41,750 people a month would have been passengers on commercial airplanes leaving the heavily infected countries of Guinea, Liberia and Sierra Leone on international flights. Estimates are that 7.17 passengers infected with Ebola would have traveled from those three countries every month.

“Our model suggests that there is a 67 percent probability of generating more than 20 new air-travel-related infections per month using the default boarding strategies with these 144- and 182-seat-configuration airplanes [Airbus A320s and Boeing 757s],” the report said. “This can be reduced to less than 40 percent by using the better pedestrian movement strategies [boarding strategies, as suggested in the report]. In addition, exclusive use of small, 50-seat airplanes further reduces the probability of generating 20 infected individuals to 13 percent probability.”

The report characterized its model and the resulting recommendations as generic items that can be modified and implemented in response to other directly transmitted infectious diseases in places where pedestrians gather.