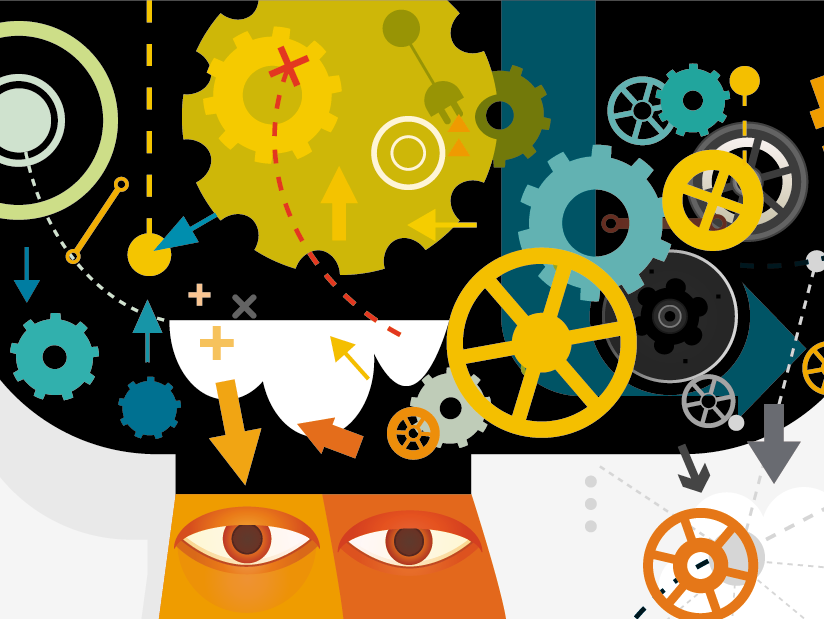 Although the actions of pilots historically have been responsible for the majority of aircraft accidents,1 most do not arise from any mental disorder. In fact, less than 0.3 percent of 2,758 fatal civil aircraft accidents in the United States during a recent 10-year period were caused by suicide, and all involved general aviation (GA) flights, not commercial airline operations.2 Instead, most accidents are caused by inadvertent errors made by flight crewmembers — errors that arise from normal physiological and psychological limitations inherent in the human condition. This article examines the role these limitations play in piloting performance and suggests strategies to help pilots minimize their influence on the flight deck.

Understanding human error follows from understanding human thinking, which is primarily the domain of cognitive psychology. Using the computer as a metaphor, this approach to the study of human thought and behavior postulates that inputs (stimuli, or other information) from the environment are received by the senses and are processed before a response (output) is made. The model assumes that information processing takes time as inputs travel from left to right, but also rejects the purely behaviorist notion that humans are merely passive responders to external stimuli; rather, people actively search for information, often processing from right to left.

A more elaborate model, developed by one of the world’s foremost researchers in the field of aviation human factors, Christopher Wickens, is found in Figure 1. Information processing begins with stimulation of sensory receptors in the eyes, ears, skin, vestibular apparatus, etc. (Table 1).3 It is generally agreed that some sort of attentional mechanism filters these sensations (inputs), often limiting the type and amount of information that is perceived, or interpreted, by the brain. These perceptions are influenced by previous experience (long-term memory) and current inputs (short-term memory, or working memory). Higher level cognitive functioning, such as decision making and problem solving, is also memory-dependent and influenced by the accuracy of one’s perception of the situation, or “situational awareness.” Finally, the model recognizes that the human brain, like a computer, has limited processing capacity, and if overloaded with inputs (task saturation), the attentional resources allocated to the various mental operations needed to effectively perform a task will significantly diminish. 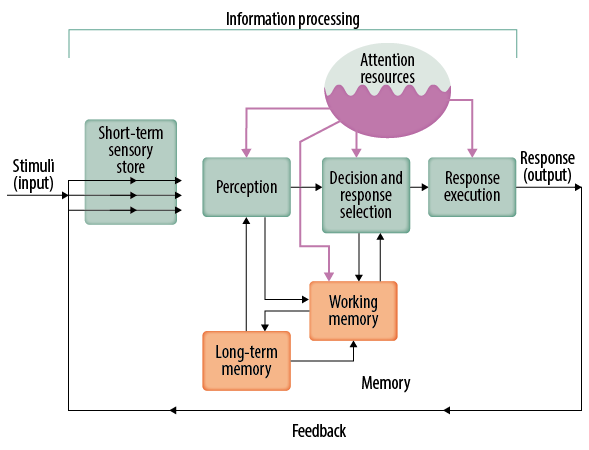 Through experiments, cognitive psychologists often study these processes in isolation but recognize that they are interdependent. For example, a distraction (e.g., a wing flap anomaly) may lead to a breakdown in voluntary attention, causing a pilot to focus too much on the flap indication, which, in turn, could lead to forgetting to accomplish a checklist item such as extending the landing gear before landing. Also, research shows that any distortions upstream in the model (e.g., sensory processing and/or perception) will adversely affect downstream cognitive functions such as decision making and response selection and execution (Table 2).

In clear flying weather, flight crews have missed or misperceived visual cues necessary to avoid a midair collision (MAC) in the day and controlled flight into terrain (CFIT) at night. They also have failed to detect or correctly perceive vital auditory cues in air traffic control communications. For example, numerous incidents (and some accidents) have resulted from call sign confusion, which occurs when controllers issue, and/or pilots respond to, a clearance intended for another aircraft with a similar call sign.

Misperceptions are often the result of breakdowns in selective attention. Pilots attend to the wrong stimulus while failing to pay attention to the correct one. CFIT, loss of control and other fatal accidents have occurred because pilots were preoccupied with nonessential tasks, or were saturated with tasks and their diminished attentional resources were unable to cope with all of them.

Successful flight performance is ­memory- ­dependent, but pilots sometimes forget past information that they have learned (retrospective memory failure) or forget to execute an important task in the future (prospective memory failure). Examples of the latter include forgetting to extend the landing gear before landing, an event so common that a cynical adage has developed among aviators that says, “There are only two kinds of pilots — those who have landed with the gear up and those who will.” In addition, fatal commercial airline accidents have occurred because flight crews have forgotten — whether due to distraction, task overload or both — to properly configure the aircraft for takeoff.

One of the most complex of mental operations is decision making. Any deficiencies in sensory processing, perception, attention or memory can lead to poor decisions, but decision making comes with its own limitations. For example, biases are often evident in the decision making of GA pilots, and some commercial pilots, who attempt visual flight rules (VFR) flight into instrument meteorological conditions (IMC). Compared with a fatal U.S. GA accident rate of less than 18 percent, some 95 percent of U.S. GA VFR-into-IMC accidents in 2012 resulted in fatalities.4 Empirical studies and accident investigations indicate that decision biases — such as invulnerability, optimism bias (the tendency to be overly optimistic in envisioning the likely outcome of a decision), and ability bias (a bias that favors the able-bodied and highly skilled), overconfidence and escalation bias (leading to entrapment by acceptance of increasing risks) — have had a part in pilots’ decisions to continue VFR flight into IMC.5

Several conclusions and recommendations can be made from an understanding of human cognitive performance and its role in aircraft accidents.

First, there are specific flight situations in which particular limitations pose a greater risk. For example, conducting a visual landing approach in dark-night conditions in clear weather increases the likelihood of a pilot experiencing a perceptual illusion (e.g., black-hole effect, a threat present on dark nights when there are no ground lights between an aircraft and the runway threshold) with its risk of a CFIT accident short of the runway. Distraction-induced attention and memory failures are also more likely, and more consequential, during certain phases of flight. Flight crews should, therefore, seek to fully understand the exact nature of these limitations and the context in which they are likely to manifest themselves on the flight deck.

In addition, there are effective strategies that pilots can use to overcome these cognitive limitations. For example, despite the inherent limitations of the “see-and-avoid” method in detecting traffic in flight, best practice strategies exist to overcome them: Pilots can utilize an effective scanning technique; increase aircraft conspicuity (e.g., turn on landing lights); ensure the transponder is correctly set; use party-line radio information to increase situational awareness; and comply with a variety of rules designed to reduce the chance of an MAC (such as maintaining a sterile flight deck). Similarly, there are practices and procedures designed to help improve attention and memory while carrying out the tasks involved in piloting an aircraft: Pilots can use effective monitoring strategies, comply with standard operating procedures (SOPs) and employ strategies to effectively manage mental workload and distractions.

Also, airlines can assist pilots by providing training in formal risk- and error-management behaviors. While flight crews undergo extensive training to avoid committing errors on the flight deck, most airlines acknowledge that pilots are subject to the cognitive limitations that all humans share, and that despite their best efforts to avoid them, errors made by pilots are inevitable. Rather than pretend these errors don’t exist, or punish pilots when the errors occur, flight departments can arm pilots with tools they need to effectively manage error on the flight deck.

One such approach to reducing risk in aviation operations is threat and error management (TEM). Used primarily by trained observers as an observation tool during line operations safety audits (LOSA),6 flight departments can leverage this framework as a training tool to assist crews in effectively managing risks on the flight deck — including those arising from limitations in human performance. As its name implies, TEM is based on the assumption that threats to safe flight are always present and errors made by pilots are unavoidable.

TEM involves using countermeasures to anticipate, detect, avoid and/or mitigate the threats pilots may face, and to detect, capture and correct the errors they do make. An error is an improper action (or lack of action) committed by the flight crew (e.g., manual flying errors, monitoring errors and improper use of checklists), while a threat is generally a condition or event outside their influence (e.g., systems malfunction, adverse weather, distractions from others). Either can lead to an undesired aircraft state — such as an improperly configured aircraft, an unstabilized approach or an undesired trajectory toward higher terrain — which, if not properly managed, could lead to an accident.

Countermeasures are behaviors, procedures or devices designed to avoid or mitigate threats and errors. Whether formally identified as TEM countermeasures or not, airline safety systems have evolved to include best practice countermeasures designed to effectively manage risk on the flight deck. These behaviors are designed to overcome the inherent limitations, as noted, in perception, attention, memory and other cognitive processes, and include:

These are generic one-size-fits-all strategies designed to counter a variety of unforeseen threats and errors. However, flight crews must also use targeted countermeasures to guard against specific threats and/or errors. For example, domain-specific knowledge and behaviors are vital when attempting to manage the risks associated with flying near thunderstorms, at high altitudes or at night. Similarly, threat-specific countermeasures are needed to avoid an MAC, a runway incursion or encounters with airframe icing.

Ancient Roman philosopher Seneca the Younger observed that “to err is human.” But he also noted that “to persist [with the error] is of the devil.” A successful approach to managing risk on the flight deck acknowledges the former but uses effective best practice strategies to avoid the latter.

Dale Wilson is a professor in the Aviation Department at Central Washington University in Ellensburg, Washington, U.S. He teaches courses in flight crew physiology, psychology and risk management, and writes about flight crew safety matters, including co-authoring the recent book, Managing Risk: Best Practices for Pilots.