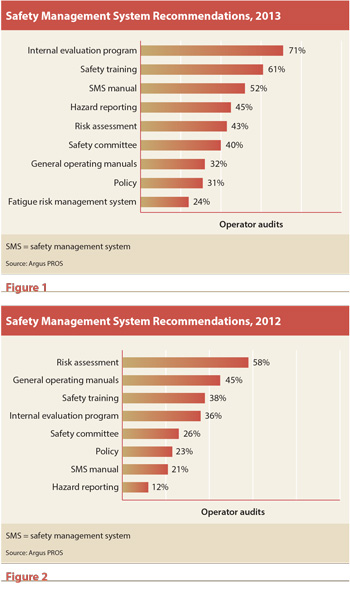 Internal evaluation programs (IEPs) and safety training were the areas most likely to be found deficient in safety management system (SMS) audits conducted in 2013, according to a report analyzing the results of those audits. Argus PROS (Partners and Resources for Operational Safety) conducted audits of private and commercial flight operations from Jan. 1 to Dec. 31, 2013, and the results from 75 audits were analyzed by PRISM. Both companies are wholly owned subsidiaries of Argus International.

“The objective of this report is to highlight those recurring deficiencies found in SMS implementation and execution,” the companies said. “A view into this industrywide aperture helps aviation operators focus their efforts on common deficiency areas cited by auditors, and use this information to improve their own SMS implementation and execution efforts.” The report, which presents an analysis of operations that had deficiencies in a particular SMS focus area, is available at <argus.aero>.

Of the 75 audits included in the analysis, 53, or just under 71 percent, had findings involving IEPs (Figure 1). “An IEP is especially important because of its design, seeking to uncover latent process or program weakness within operations and maintenance focus areas because they become causal factors in an accident or incident,” the report said.

The next most frequently cited area was safety training, which was assessed as deficient in 46, or 61 percent, of the audits. According to the analysis, a lack of continuing education and SMS training for safety mangers accounted for many of the recommendations. “Participation in self-development, and safety conferences and courses is very important for safety mangers to initiate and continue increased understanding of safety management concepts and practices,” the report said.

The only other focus area that showed up in the majority of audits (39 of 75, or 52 percent) was categorized as “SMS manual.” A sample audit recommendation in this area says that the SMS manual needs to be reviewed to ensure that is appropriate for the size and scope of the company.

Interestingly, the analysis of the 2013 audits produced significantly different results than did an analysis of audits conducted in 2012 (Figure 2). According to the 2012 report, 58 percent of the audit findings pointed to deficiencies in risk assessment (ASW, 6/13). The next most common problem area involved the general operating manual (45 percent), followed by safety training (38 percent). 2013’s most often cited deficiency, IEP, showed up in 36 percent of the audits the previous year, and SMS manual was only cited in 21 percent of the audits.

But when looked at from a multiple-year perspective, the 2013 results basically are in line with previous results. The PRISM report aggregated and averaged previous years’ results and compared them with 2013. In the period 2008–2012, IEP and SMS training were the most frequently cited problem areas, with an average of 29 recommendations each per year out of 322 audits conducted during the five-year period (Figure 3). When 2013’s numbers are rolled in with the previous five years, the results are much the same. For the 2008–2013 period, IEP and SMS training were cited in 49 percent and 48 percent of all audits, respectively (Figure 4).

The average number of worldwide civil helicopter accidents per year currently is trending downward, according to information released in February by the International Helicopter Safety Team (IHST).

IHST data for the period 1997–2005 show that this average was 570, and that the average then had trended upward at an annual rate of 2.5 percent (Figure 6). But in the 2006–2012 period, the average was 515 per year, and that average trended downward at 2 percent per year, said IHST, which was formed in 2005 to lead a government–industry effort “to address factors that were affecting an unacceptable helicopter accident rate.”

IHST qualified its analysis by saying that it does not have “solid” data on worldwide flying-hour increases or decreases since the organization was formed, but “the number of helicopters is growing and the flying hours in many helicopter industries have been increasing. As a result, the IHST is fairly confident that the accident rate is declining by at least as much as the accident count is declining.”

The number of civil helicopter accidents in the United States declined by one in 2013 to 147 from the previous year, but the number of fatal accidents jumped by nearly 35 percent to 31 in 2013 from 23 in 2012, according to IHST data (Figure 7).

Separately, the Helicopter Association International’s (HAI’s) five-year comparative U.S. civil helicopter safety-trends data show an accident rate of 4.83 per 100,000 flying hours in 2012, the most recent full year for which data are available. The rate in 2011 was 4.02 and in 2010 was 4.47. HAI’s accident rates were calculated using 3.17 million helicopter hours flown in 2012, 3.08 million in 2011 and 3 million in 2010. The flying hour estimates are based on annual forecasts generated by the U.S. Federal Aviation Administration.