Actual air density must be considered to reduce risk of degraded thrust and lift in takeoffs, landings, cruise and flight path changes. 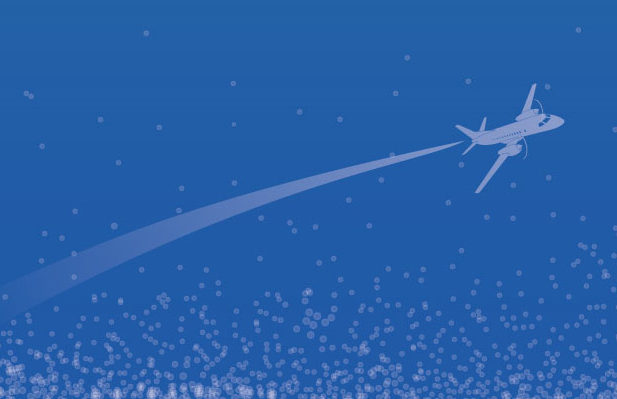 On Aug. 2, 2007, a Robinson R44 II helicopter crashed in the mountainous terrain of west central Washington state, U.S. The crash and subsequent fire took the lives of the pilot and three passengers who were touring logging sites. Witnesses said the helicopter lifted off, climbed straight up and turned left. This put the aircraft into a slight tailwind. They said that, after traveling a few hundred feet, the helicopter began to wobble and yaw back and forth. It then descended quickly, striking the ground. There was an explosion and the helicopter was immediately engulfed in flames.

Subsequent examination of the engine and airframe indicated no anomalies that would have contributed to the crash, the final report said. The 41-year-old commercial pilot had more than 2,000 hours in helicopters and was certified as a helicopter instructor. No evidence of alcohol or drug impairment was found. The weather, suitable for visual flight rules (VFR) operation, was not a factor.

The accident environment, however, involved what is known as high density altitude.

The clear-cut area of the logging site from which the helicopter took off was at an elevation of 4,961 ft (1,512 m). The temperature at the time was above 70 degrees F (21 degrees C). The density altitude was calculated to be 6,841 ft, meaning the air was as “thin” (less dense) as it would normally be at 6,841 ft. The U.S. National Transportation Safety Board (NTSB) concluded the probable cause of the accident to be “the pilot’s improper planning/decision in attempting a downwind takeoff under high density altitude conditions that resulted in a loss of control and impact with terrain. Contributing to the accident was the helicopter’s gross weight in excess of the maximum hover out of ground effect limit.”1

High density altitude conditions are a hazard for all aircraft, not just small, propeller-driven ones. The Boeing Co. considers the threat to be so important that it held a three-day conference in October 2007 in conjunction with the Civil Aviation Administration of China, concerning “High and Hot Operations.” It used multi-engine airplanes as examples. It also stressed the effects on jet engines, in particular the reduction in thrust at high altitude (i.e., above 25,000 ft).

In their basic training, pilots are taught that “high, hot and humid” air can cause performance problems for their aircraft. However, the number of accidents and near-accidents that continue to occur indicate that the hazards associated with high density altitude are not always well understood or fully appreciated. Numerous harrowing videos on the Internet show pilots struggling to control their aircraft in high density altitude conditions.

To fully understand the problem of high density altitude, it is necessary to go back to the basics of atmospheric density, pressure and altimetry, using air pressure as the gauge of altitude.

Atmospheric pressure (measured with a barometer) is simply a measure of the weight of a column of air above a point. The more air above the point, the greater the pressure. At sea level, the entire atmosphere is above and pressure is greatest. The average (mean) sea level pressure is 29.92 in Hg (1013 hPa). At higher altitudes, there is less air above and the pressure decreases —very rapidly, even exponentially. If we assume, reasonably enough, that pressure decreases with height at the same rate everywhere, pressure indicates altitude. The standard altimeter is really just an aneroid barometer set to read pressure as altitude.

But the pressure at sea level is not always 29.92 in Hg. It varies, primarily because of the movement of surface weather systems, the common high- and low-pressure areas seen on standard weather maps. This is why pilots check the altimeter setting at the airport. This is the actual pressure adjusted to mean sea level. Entering this reading on the altimeter enables it to calculate the above sea level (ASL) altitude by comparing the unadjusted actual pressure (what meteorologists call station pressure) to the adjusted sea level pressure.

The term pressure altitude describes this type of height approximation. The ASL altitude would typically determine a given pressure value. For example, if the measured pressure is 28.00 in Hg, this would equal a pressure altitude of about 1,800 ft ASL.

Besides pressure, air density is affected by temperature and humidity (water vapor or moisture content). Contrary to popular belief, moist air is less dense than dry air because water vapor weighs less than the gaseous constituents of dry air. So, air with higher humidity is slightly less dense than drier air at the same temperature. However, differences in air density due to changes in humidity are usually not significant for flight performance.

With the ground absorbing heat from the sun, surface temperatures can rise to 90 degrees F (32 degrees C) or even higher. The density altitude in that case is 8,200 ft. This is a significant decrease in air density. There is a specific formula to determine density altitude, given the actual pressure and temperature. Typical current tables and graphs, as well as digital devices and apps, have been produced for pilots to enter only pressure altitude and temperature to make the calculations easier for operational conditions.

When the combination of high elevation and high temperature produces a safety-­significant decrease in air density, we refer to it as a high density altitude situation. The term could be misleading, though. It does not mean high density, just the opposite. It means the pilot will experience the low-density air typically found at high altitudes.

The air density has major effects on aircraft capabilities. First, it affects the performance of the reciprocating or turbine engine. The combustion that generates the engine’s power is adversely affected by high density altitude, because there are fewer air molecules in the thinner air. Less air intake means less power generated unless corrective measures are taken. Second, the thrust produced by a propeller, turbine blades or rotor blades is reduced due to the thinner air. And finally, the lift generated by the wings of airplanes or the rotor blades of a helicopter is a function of air density. In high density altitude conditions, less lift is produced.

High density altitude creates two significant effects on takeoffs. First, it takes longer for an aircraft to become airborne. In the worst case scenario, an airplane pilot can run out of runway before the plane lifts off, which can lead to a runway excursion. To avoid this, it is advisable to check the takeoff performance chart in the pilot’s operating handbook.

In addition, the climb rate after takeoff is reduced compared with low density altitude. The initial flight path is flatter than usual. This is of particular concern because at many high‑­altitude airports, the terrain rises quickly after the runway end. The U.S. Federal Aviation Administration (FAA) says that pilots should check the operational data section of the aircraft owner’s manual or the pilot’s operating handbook developed by the aircraft manufacturer to see how aircraft performance is affected by air density. In lieu of these sources, some pilots use the Koch chart, which relates altitude and temperature to takeoff distance and rate of climb. Pilots can check conditions at their location before takeoff and arrival and make the needed adjustments.

Problems with high density altitude are not restricted to takeoffs. For landings, the true airspeed is greater in thin air, even though the indicated airspeed is less. This can lead to excessive landing speed, increased rollout distance and the possibility of a runway excursion.

Even in cruise flight, problems can occur. In August 2006, a Piper PA-28R-2-1 Arrow was flying through mountainous terrain northwest of Salida, Colorado. The experienced pilot found himself trapped in a box canyon, unable to gain enough altitude to escape. The plane crashed, killing the pilot and seriously injuring the one passenger. Salida itself is at an elevation of 7,083 ft (2,159 m). Due to warm temperatures, the density altitude was over 9,000 ft (2,743 m).

In most incidents and accidents, there are a number of causal and contributing factors. At times, the combination of factors has exceeded the pilot’s or flight crew’s ability to break the causal chain of an accident, even when they respond as trained to a situation. In some of the events described above, the NTSB determined that the airplane was overloaded, which exacerbated the effect of the high altitude conditions. Financial concerns can tempt those in the aviation business to load to the maximum or even a little beyond. A sudden wind shift or a slight pilot miscalculation can also put the aircraft in jeopardy. In such cases, high density altitude can severely reduce the margin of error.