Keys to a Safe Arrival

Flight Safety Foundation (FSF) has developed a new tool to reduce the risk of approach-and-landing accidents, particularly those involving runway excursions. The latest product is a set of safe-landing guidelines that are intended to be used by aircraft operators to enhance existing standard operating procedures.

The Foundation began its approach-and-landing accident reduction (ALAR) effort in 1998 with the release of a report titled “Killers in Aviation.”1 This was followed in 2001 by the introduction of the ALAR Tool Kit, a CD-based product that includes pilot briefing notes, videos, presentations, risk-awareness checklists and other material designed to prevent approach-and-landing accidents. The Foundation completed a major update of the tool kit in 2010.2

More than 40,000 ALAR Tool Kits have been distributed worldwide, and the Foundation’s CFIT and Approach-and-Landing Action Group has conducted 35 ALAR workshops around the world to help disseminate this important information.

In 2006, several international aviation organizations asked the Foundation to conduct a study of runway safety. After a comprehensive analysis of runway safety data, the Foundation determined that runway excursions, including overruns and veer-offs, pose a greater risk than other types of runway-related accidents. The data showed that one of every three turbojet airplane accidents and one of every four turboprop accidents is a runway excursion.

Because of the significance of these findings, the Foundation focused its attention on runway excursions. This effort culminated in 2009 with the publication of a report titled “Reducing the Risk of Runway Excursions,” which addresses the high-risk areas of overruns and veer-offs, and provides specific tools to reduce the risks.3

The tools for reducing runway-excursion accidents are applicable for the full spectrum of the aviation community, including flight crews, management, air traffic control, airports and regulators. 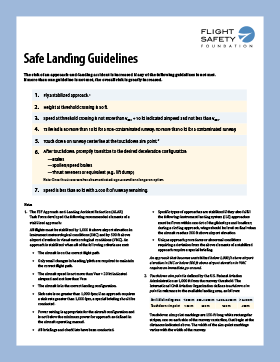 The FSF runway safety initiative revealed a gap in the risk reduction tools provided by the ALAR Tool Kit — the landing itself. To fill the gap, the Safe Landing Guidelines were developed by the Foundation in conjunction with a team of experts that included representatives of aircraft manufacturers, seasoned airline pilots with training and check airman experience, aviation safety specialists and corporate aircraft operators, all with extensive backgrounds in the Foundation’s ALAR effort.

The first thing to notice when looking at the guidelines is the name itself — guidelines. They are not rules or regulations. They are data-driven guidelines that address the key aspects of conducting a safe landing.

Some combinations of elements are highly conducive to a runway excursion, such as landing long and fast, or landing with a tail wind on a runway contaminated with standing water, snow, slush or ice.

The guidelines start with the basics — and number one is to fly a stabilized approach. As noted in both the Foundation’s ALAR work and its runway safety initiative, this is the cornerstone of a safe approach and landing. The recommended elements of a stabilized approach developed by the ALAR Task Force have been widely adopted and adapted by aircraft operators.

The next guideline is to cross the runway threshold at 50 ft. For every 10 ft above that height, the landing distance is increased by 200 ft (61 m).

For every 10 kt above VREF, the landing distance is increased by 20 percent. Thus, speed is a very important element of a safe landing, and being fast greatly increases the risk of a runway excursion.

The next guideline addresses allowable tail wind. It recommends a maximum acceptable tail wind component of 10 kt. Moreover, as mentioned earlier, data show that tail winds become a greater risk when combined with contaminated runways. This is why the guidelines recommend that no landing should be attempted with any amount of tail wind when the runway is contaminated.

The next guideline provides information on the process of slowing and stopping the aircraft. The order in which the aircraft’s deceleration devices — wheel brakes, spoilers/speed brakes and thrust reversers (or their equivalent) — are deployed may vary from the order shown by the guideline, depending on the manufacturer’s recommended procedure for the specific aircraft.

An important note that accompanies this guideline is that once thrust reversers or their equivalent (e.g., a lift-dump system) have been activated, going around is no longer an option, and the flight crew is committed to land (See “Point of No Return”).

Finally, the guidelines recommend that the aircraft be slowed to less than 80 kt by the time it reaches the point on the runway where only 2,000 ft (610 m) of pavement remain.

Grist for an SOP

The Safe Landing Guidelines tie together the Foundation’s 20 years of ALAR experience and its recent work on preventing runway excursions. They provide concise, data-based information on what needs to be done to reduce the risk of a runway excursion.

They are intended to be used as their title suggests — as guidelines. The Foundation is not advocating that the guidelines be copied and handed out to flight crews. We do recommend that they be used by aircraft operators, in conjunction with information from aircraft manufacturers, to create their own rules and policies.