Pre-flight safety briefings should include instructions for passengers to leave behind their carry-ons in the event of an emergency evacuation. 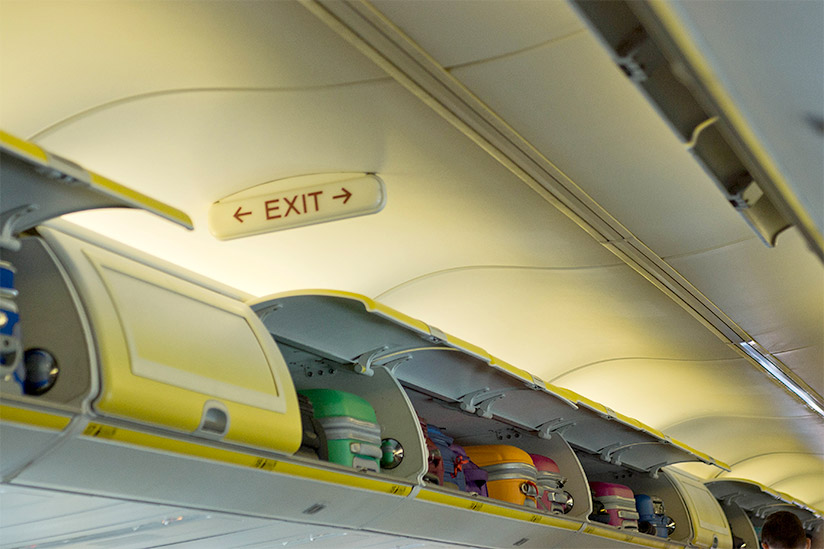 Statistically it’s relatively rare, but the scenario is not unfamiliar: An airliner stopped on a runway, ramp or taxiway somewhere in the world, an emergency evacuation under way, and passengers grabbing their carry-on bags from overhead bins and from under seats before heading for the emergency exits and going down the escape slides.

From 2015 through 2017, the world’s passenger and cargo airlines flew 120.3 million flight sectors, according to data from the International Air Transport Association (IATA).1 During that same period there were 117 commercial jet and turboprop passenger aircraft accidents in which a cabin end state could be determined. In 48 of those accidents, the cabin end state was characterized as “evacuation (land)” or “evacuation (water).” Evacuation is defined as “passengers and/or crew evacuated the aircraft via escape slides/slide rafts, doors, emergency exists, or gaps in the fuselage; usually initiated in life threatening and/or catastrophic events.” Forty-seven of the emergency evacuations occurred on land and one occurred into or onto water.

It’s not possible to determine how many of those evacuations involved passengers ignoring crew instructions to leave their carry-ons behinds, but it happens often enough to generate concern among regulators and other safety professionals.

In Canada, in the wake of an incident earlier this year, the Transportation Safety Board (TSB) and Transport Canada (TC) both have reiterated previous recommendations that pre-flight safety briefings, and pre-arrival briefings on long-haul flights should include instructions to passengers to leave behind their carry-ons in the event of an emergency evacuation. In addition, TC said in a Civil Aviation Safety Alert (CASA) issued in April that beginning in early 2019, it plans to begin surveillance activities to evaluate whether Canadian carriers are following the recommendations.2

The event in question occurred at Toronto’s Lester B. Pearson International Airport. On Jan. 5, a WestJet Airlines Boeing 737-800 that had just arrived from Cancun, Mexico, with 169 passengers and six crew on board stopped in Lane 2 of the north-side apron of Pier B at the airport’s Terminal 3 to wait for ground personnel to guide the aircraft into position at Gate B12.3 The WestJet airplane was stopped directly behind, and perpendicular to, a Sunwing Airlines 737-800, which was parked at Gate B13 and was being prepared to be towed to another location. The Sunwing airplane’s auxiliary power unit (APU) was operating and there were no passengers on board, but there was a Sunwing maintenance technician in the cockpit, and two contract ground personnel were in the cab of a tow vehicle connected to the nose of the aircraft.

After being told by the airport authority’s apron management unit to “push back at your discretion,” the tow vehicle operator, working without wing walkers, began the pushback procedure. The Sunwing 737 collided the with the stationary WestJet 737’s right wing. Thirty-one seconds later, a large ball of fire erupted near the area of aircraft contact.

The WestJet flight crew was immediately aware of the fire and began the evacuation process, which included the 737-800’s evacuation quick reference checklist, according to the investigation report. At the same time, some passengers on the WestJet airplane began to panic. Three seconds after the fire erupted, and before any commands from the crew, passengers seated near the forward left overwing emergency exit opened the exit and escaped onto the wing.

Shortly thereafter, the captain made the evacuation announcement. During the evacuation, flight attendants issued instructions, with and without the assistance of a handheld megaphone, telling passengers to leave their carry-ons behind. “Despite these instructions, numerous passengers brought carry-on baggage with them, which slowed down the evacuation process,” said the TSB report issued following the agency’s limited-scope investigation.

Starting from the time at which the captain made the evacuation call, the evacuation took approximately 2 minutes and 23 seconds. Starting from the time at which the left overwing exit was opened, it took 3 minutes and 9 seconds.3 No passengers or crew were seriously injured in the incident, but a firefighter received minor injuries from exposure to secondary spray of water that was mixed with fuel from the APU. 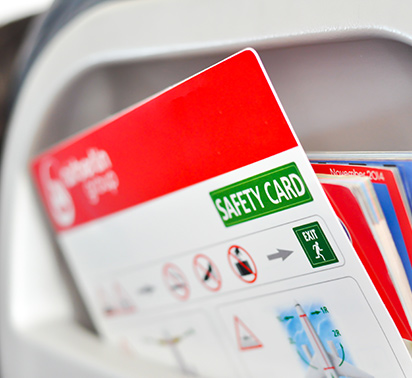 In its report, TSB said the WestJet safety features card located in the passenger seatbacks has a small illustration indicating that passengers are not to take personal items in the event of an evacuation. The content of the pre-flight safety briefing for the occurrence flight could not be determined, but sample pre-flight briefings in the airline’s Flight Attendant Manual do not include passenger instructions regarding carry-on baggage in the event of an emergency evacuation, TSB said.

One of the more significant previous occurrences happened in August 2005, when an Air France Airbus A340-300, arriving at Toronto at the end of a scheduled flight from Paris, overran Runway 24L, came to a stop in a ravine and caught fire. All 297 passengers and 12 crewmembers were able to evacuate the aircraft before the fire reached the escape routes, but two crewmembers and 10 passengers were seriously injured in the crash and subsequent fire.

During its investigation of the accident, TSB found that during the emergency evacuation, many passengers took their carry-on baggage with them, despite specific instructions to the contrary being repeatedly shouted to them by the cabin attendants. In December 2007, after the investigation was completed, TSB issued Aviation Safety Recommendation A07-07, which called on the Department of Transport to require “that passenger safety briefings include clear direction to leave all carry-on baggage behind during an evacuation.”

In issuing the recommendation, TSB said research into other accidents involving emergency evacuations revealed that passengers insisting on retrieving their carry-on baggage was widespread. “Research has also demonstrated that in a heightened state of fear, individuals have difficulty in understanding and adhering to instructions given,” the recommendation said. “Furthermore, it was found that, in some aircraft, emergency evacuation cards for the passengers do not show any direction to leave carry-on baggage behind during an evacuation. Without prior instructions or guidelines concerning the dangers of attempting to take their carry-on baggage during an evacuation, passengers are likely to do so, increasing the potential for injury.”

TC said it agreed with the recommendation and that it would propose an amendment to the Canadian Aviation Regulations (CAR) to require that passenger safety briefings include direction to leave all carry-on baggage behind during an evacuation. According to TSB, however, such an amendment has not yet been proposed. So, while the CAR identifies the required content of passenger safety briefings and safety features cards, there is no specific regulatory requirement to warn passengers about the dangers of attempting to take their carry-ons with them if an emergency evacuation is required.

In March 2009, TC issued Advisory Circular (AC) 700-012, Passenger Safety Briefing, to remind air operators of their responsibilities regarding passenger safety briefings and to recommend that all briefings — pre-takeoff, pre-landing and in preparation for an emergency landing — include clear direction to leave all carry-on baggage behind during an evacuation.

The AC offered some interesting insights into how safety briefings are perceived. It noted that operators frequently begin safety related briefings with “Transport Canada requires …” or “Regulations state that … ,” which may seem to accentuate the significance of the safety briefings. Actually, the perceived importance of a briefing is significantly lessened when introduced with a statement stressing regulatory compliance rather than safety accountability, TC said. “Passenger surveys suggest that the travelling public want the responsibility for their safety to be a shared concern, involving the air operator, the crew, the passenger and Transport Canada Civil Aviation (TCCA). Surveys also indicate that an apparent lack of endorsement by the air operator, as well as the lack of individual crew member responsibility, will often have a contradictory or negative impact on the information provided to the passengers.”5

According to the AC, there is perception among passengers that the majority of aviation accidents are not survivable and that there is little they can do to increase their personal survival abilities. But TSB analysis of several accidents has found “that thorough safety briefings to passengers have increased the chances of survival for passengers. Accident survivors have also recalled the pre-flight safety briefing as being very thorough and performed in a professional manner.”6

In 2013, in its latest response to the TSB’s 2007 safety recommendation on carry-on baggage, TC said it had canvassed Canada’s major carriers to assess the extent to which the airlines were directing passengers to leave behind their carry-ons during an emergency and that it was encouraged with the level of compliance with the voluntary guidance.

After the January WestJet evacuation, however, TSB investigators randomly selected a small number of regularly scheduled flights on different Canadian airlines and observed passenger safety briefings to determine whether passengers were being instructed to leave behind their carry-ons in the event of an emergency evacuation, according to the TSB’s report into the incident. “None of the briefings on the observed flights provided this type of instruction to the passengers at any point before or during the flight,” TSB said.

In April 2018, TC issued CASA No. 2018-04, Passengers Retrieving Carry-on Baggage During Evacuations. The alert reiterated TC’s previous recommendation on passengers being instructed to leave carry-ons behind in the event of an emergency and said that recent evacuations suggest that actions taken by operators in response to the recommendation have not been effective in mitigating the potential safety hazard.

“Operators should have a strategy in place to mitigate the risks involved with passengers removing carry-on baggage during an evacuation by using its safety management system to proactively identify, assess, and mitigate the risks to effective emergency evacuation as a result of an increase in the carry-on baggage brought into the passenger cabin.”7