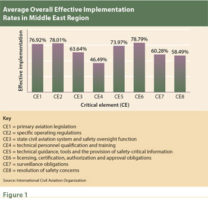 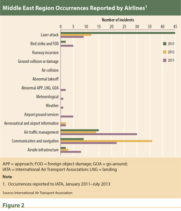 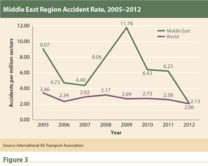 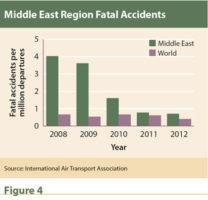 Countries in the Middle East with oversight systems that have been audited by the International Civil Aviation Organization (ICAO) have scored above the world average for their effective implementation (EI) of eight critical elements (CEs) of aviation safety, the ICAO Regional Aviation Safety Group–­Middle East (RASG-MID) says.

The group said, in its second MID Region Annual Safety Report,1 that the 13 audited Middle East states2 had an average EI score of 69.85 percent, compared with the worldwide average of 61.70 percent, (Figure 1).

The report said the EI scores were derived from results of ICAO’s Universal Safety Oversight Audit Programme (USOAP), which showed that the region’s highest average scores were in areas involving licensing and certification (CE6), operating regulations (CE2), primary aviation legislation (CE1) and technical guidance materials (CE5). The lowest average score was 46.49 percent in qualification and training of the technical staff involved in carrying out regulatory functions (CE4), the report said.3

The report’s objective was to use the safety information gathered from various sources —Boeing, the International Air Transport Association (IATA), ICAO, airline operators and individual states — to “identify the main aviation safety risks in the Middle East Region in order to deploy mitigation actions for enhancing aviation safety in a coordinated manner. …

Five states — not identified by name in the report — provided individual answers to ICAO requests for data on safety occurrences within their jurisdictions. Their information identified the most frequently reported occurrences as air traffic control–related reports, including reports about conflicting traffic and airspace deviations; diversions; level busts (altitude deviations); unstable approaches; controlled flight into terrain; and wake turbulence.

The primary root causes, according to the information supplied by the five states, were human errors, wind shear and other weather conditions, and aircraft system malfunctions.

According to reports by airlines to IATA’s Middle East and North Africa Office, laser attacks (also called illuminations or strikes) on their aircraft were the most frequent occurrences in 2013, when 40 attacks were reported, up from nine in 2011.4 Air traffic management factors accounted for 15 occurrences in 2013, and communication and navigation accounted for nine, the report said (Figure 2).

Runway and taxiway excursions occurred more frequently than any other type of accident and accounted for nearly 20 percent of all accidents in 2008–2012, the report said. Loss of control–in flight (LOC-I) accidents were next-most frequent and accounted for about 17 percent of all accidents (Figure 5). Worldwide, runway/taxiway excursions, gear-up landing/gear collapse and ground damage all occurred more often than LOC-I accidents. In both the MID region and the world, accidents were more likely during landing than in any other phase of flight.