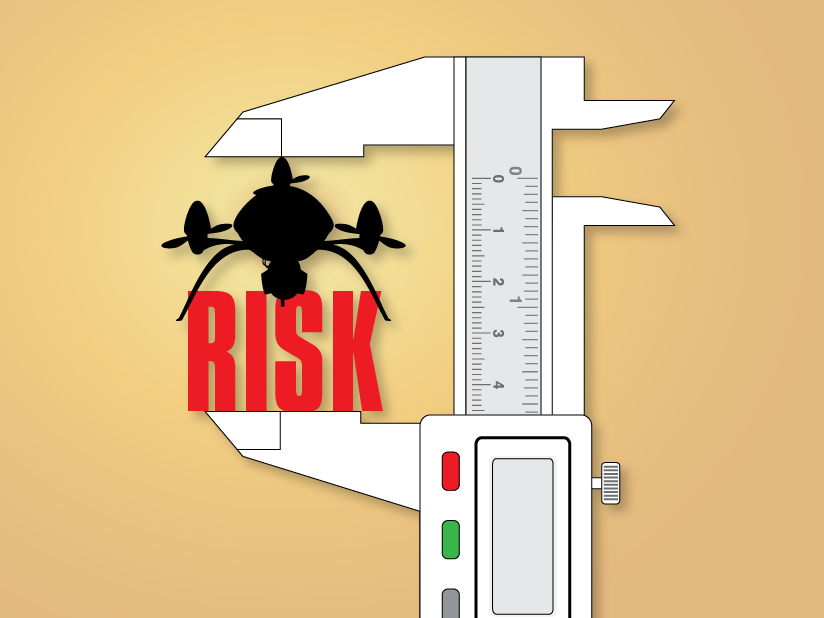 A large aircraft could, under certain circumstances, suffer “high severity effects” in a collision with an unmanned aircraft weighing as little as 1.5 kg (3.3 lb), according to testing by the European Aviation Safety Agency’s (EASA’s) Drone Collision Task Force.

The task force said that damage would be considered of high severity — typically involving either a “large reduction in functional capabilities or safety margins” or a hull loss — if a collision occurred while the aircraft was in cruise flight above 10,000 ft. At lower altitudes, the severity level would be lower because of lower kinetic energy during impact, the panel said in a report issued in October.1

The task force evaluated hazard effects of the collisions on a scale from 1 (for the most severe) to 5 (for “no effect on operational capabilities or safety”).

A collision involving a manned aircraft and a UAS aircraft from the smallest of the open category drones “is expected to be harmless, at least for large aeroplane product types,” the task force report said, calling for additional research to determine the consequences for smaller aircraft.

The report included three recommendations, including one calling for development of an analytical model “that takes into account a more detailed analysis of the construction of drones and an assessment of the dynamic behaviour of drones and their components (in particular their motors and batteries) during an impact.”

A second recommendation urged a specific risk assessment of the behavior of lithium batteries “on impact with structures and rotating parts and their possible ingestion by jet engines.”

The third recommendation is for additional research to “establish hazard severity thresholds” for collisions between manned aircraft and UAS aircraft. The recommendation suggests performing impact analyses by using software and computing capabilities that already exist for risk assessments of bird strikes and aircraft impacts with engine debris.

The outcome of the research could be used, among other things, to influence design changes in UAS aircraft so that risks can be limited in case of a collision, the report said.

UAS technologies present a “regulatory challenge,” the report said, noting that existing safety rules were not written with UAS in mind.

“Given the broad variety of drone types being used under very differing operating conditions, the regulatory framework must move from an aircraft-centric approach towards an operation-centric approach,” the report said. “If drones are operated alongside ‘manned aircraft,’ all the existing aviation rules and procedures must be followed, which means there is a need to develop ‘detect and avoid’ or ‘command and control’ technologies for drones to ensure that drones can comply with those rules and procedures.”

The report estimated — using data from EASA, national aviation authorities throughout Europe and other sources — that 500 “occurrences” involving UAS were reported in 2015, up from fewer than 150 the previous year. The most common type of occurrence was classified as “airborne conflict,” defined as “a potential collision between a drone and an aircraft in the air,” the report said. The number also included three collisions between non-commercial aircraft and UAS aircraft, the report said.

The report also noted a 1997 midair collision involving a Grob G109B touring motor glider and a radio-controlled model aircraft that caused the glider’s wing to separate from the aircraft, causing a loss of control. Both people in the glider were killed. The report said the accident occurred “below 200 m [656 ft]” but did not include other details, including the location.

“EU aviation safety standards are already high,” said committee member Marian-Jean Marinescu. “Even so, the growing use of drones and threats from terrorism and cyber attacks requires new rules to ensure aviation safety and security. At the same time, these rules should be performance- and risk-based; ultralight or business aviation should not have to meet the same requirements.”

Marinescu noted that UAS already are being used in many applications. “At the same time, without proper discipline, these could give rise to serious safety and security problems,” he added.

Other elements of the committee’s plan would “bring all unmanned aircraft … within the EU civil aviation framework for the first time, setting out design and operation requirements to ensure privacy and safety,” the committee said.

“The EU Commission would be tasked with defining detailed safety rules for drone design and drone flights, such as conditions in which additional equipment is required to limit altitude or access to critical zones (e.g., power plants or airports).

Committee members also said that the EU Commission should establish procedures for the mandatory registration of unmanned aircraft with a maximum takeoff weight of more than 250 g (9 oz), as well as the marking and identification of the aircraft.

Other provisions would enable EASA to issue recommendations and directives to correct problems associated with aircraft design and to address other risks.

In addition, plans call for each state within the EU to establish a national aviation safety program, as well as a plan for identifying key safety risks for civil aviation and actions to mitigate the risks.

In the United States, the Department of Transportation’s Office of Inspector General (OIG) criticized the Federal Aviation Administration (FAA) for its failure to establish a risk-based approach to UAS oversight. Such an approach would enable FAA to “most effectively identify and mitigate UAS safety risk,” the OIG said in a report released in early December.2

The report noted that in 2015, FAA streamlined its process for exempting civil UAS — also known as remotely piloted aircraft systems or drones — from regulatory requirements but did not include provisions to “verify that operators actually meet or understand the conditions and limitations of their exemptions, either before or after the application is approved.” Instead, the process relies solely on information provided by the applicants.

“We identified instances where exemption holders were not in compliance with their approval (e.g., flying a UAS without a required pilot’s license) or did not understand certain exemption provisions (e.g., prohibited night operations),” the OIG report said. “FAA also does not track exemption holders beyond the mailing address submitted during the application process. As a result, FAA has limited knowledge of where UAS actually operate and limited means to oversee those exempted operators.”

The report said that a risk-based safety oversight process is crucial to focusing FAA resources on a range of emerging risks.

“For example, as of April 2016, there were no formal, instructor-led training courses and only two outdated online courses available to inspectors focused on UAS technology,” the report said. “In addition, FAA field offices, which are responsible for oversight, do not receive sufficient information regarding UAS operators — such as where or when most UAS will be operating in their jurisdiction — from agency headquarters, hindering their ability to provide proactive oversight.”

The report noted that pilots of manned aircraft are now reporting about 100 sightings a month of UAS aircraft. FAA enforcement actions have been limited, however, because the agency has emphasized operator education rather than enforcement.

“In the absence of a risk-based oversight system, FAA inspectors respond primarily to incidents only after they are reported,” the report said. “FAA also lacks a robust data reporting and tracking system for UAS activity, and the information available is difficult to analyze and collected in a fragmented manner.”

The report cited as an example the reports received by one FAA office about an approved UAS operator who regularly flew his aircraft at night, which was “outside of exemption limitations.”

The report added that, “due to a lack of routine analysis, this office did not provide the information to the field for further investigation until an FAA inspector requested it four months later in response to a complaint. As a result, FAA is currently restricted to a reactive approach to UAS oversight, rather than proactively identifying and mitigating risks with a rapidly advancing technology.”

The OIG included six recommendations in the report, including that the FAA:

The report included an FAA response, which said the agency agreed with all six recommendations and noted that it already had taken action in several areas cited by the OIG, including updating safety inspector training, establishing milestones for updating UAS guidance to keep pace with developments in technology and operating an inspection program for commercial UAS operators. The agency said it was planning action to implement the other recommendations.