As UAS — authorized and unauthorized — work their way into the airspace, accidents and incidents are increasing. 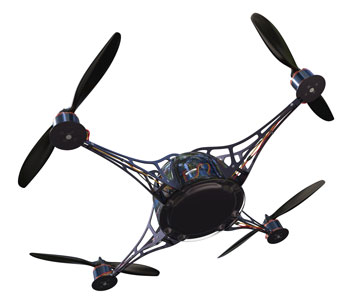 A small unmanned aircraft systems (UAS) vehicle came so close to a US Airways Bombardier CRJ200 near Tallahassee, Florida, U.S., one day last March that the airline pilot was convinced the two aircraft had collided.

The pilot reported what he thought was a near midair collision to air traffic controllers, who had no information about UAS — also sometimes known as remotely piloted aircraft, unmanned aerial vehicles (UAVs) or drones — operating in the area. Ultimately, the U.S. Federal Aviation Administration (FAA) investigated but was unable to identify the UAS or its pilot.

In this instance, and a number of others like it in recent months, danger did not materialize, Jim Williams, manager of the FAA UAS Integration Office, said in remarks earlier this year to the Small Unmanned Systems Business Exposition in San Francisco. Nevertheless, he added that, in similar occurrences in the future, the results “could be catastrophic,” especially if a small UAS aircraft is ingested into a jet engine.

“What kind of injuries or damage could be caused by one of these aircraft?” he asked. “More than you might think, even though they may weigh only a few pounds.”

As an example, he cited an incident in late 2013 when an unauthorized small UAS aircraft — an open-rotor hexacopter — that had been hired to film an event at the Virginia Motor Speedway in Jamaica, Virginia, crashed into a spectator stand, causing several minor injuries. The operator told the FAA that he believed the crash resulted from a malfunctioning battery.

With a growing number of UAS — authorized and unauthorized — in the skies, the number of reported accidents, incidents and near-midair collisions is slowly increasing.

An investigation earlier this year by The Washington Post found that registered UAS operators in the United States, including law enforcement authorities and universities, had reported 23 accidents and 236 unsafe incidents between November 2009 and June 2014.1

A search of U.S. National Transportation Safety Board (NTSB) records reveals only a handful of final reports on UAS occurrences, including three non-fatal, non-injury accidents and three incidents between 2006 — when the first UAS accident in the United States was recorded — and 2009. In each case, the aircraft was either being flown on a demonstration or test flight, or being operated by a U.S. government agency on a public use flight.2

The NTSB’s 2007 final report on the first accident concluded that the probable cause was “the pilot’s failure to use checklist procedures” when switching from one ground control console that was inoperable because of a “lockup” to another console at the same ground control station. In the process, the fuel valve on the General Atomics Aeronautical Systems MQ-9 Predator B was inadvertently shut off, causing the engine to lose power; the aircraft crashed in a remote area near Nogales, Arizona, on April 25, 2006 (see Table 1).

A preliminary report has been issued in a more recent occurrence — a July 26, 2013, event in which a Sensor Integrated Environmental Remote Research Aircraft (SIERRA) operated by the U.S. National Aeronautics and Space Administration (NASA) Ames Research Center, struck the surface near Prudhoe Bay, Alaska.

Preliminary information indicated that, about four hours into the planned six-hour flight to assess sea ice during the melting season, the aircraft briefly lost its Iridium satellite communication link. When the connection was reestablished, RPM and alternator warning lights were illuminated on the ground control display, and the aircraft entered a controlled glide until impact, the NTSB said. A preliminary report, which said that the aircraft probably struck the ice, added that there were no plans for recovery. The investigation was continuing.

For example, the captain of a Bombardier CRJ200 described an experience during approach to Newport News/Williamsburg (Virginia) International Airport in March 2013:3

We were issued a clearance to descend to 4,000 ft. At that moment, I saw a target on our TCAS [traffic-alert and collision avoidance system] about 4 mi [6 km] ahead at 4,000. I told … approach about the target, and they said they weren’t talking to that traffic. … Then we caught the target visually at 12 o’clock. I first thought it was a hawk circling because it was very small and maneuvering mostly in circles. A few seconds later, [it] took shape of an aircraft with wings. We told approach we were going to turn right to avoid hitting the aircraft. As we were turning, we got within 2 ½ mi [4 km] and the same altitude as it went from our 12 o’clock position, and for about five seconds, it seemed to chase us … before suddenly turning back to our 12 o’clock position. As it passed by … we observed it flying extremely erratically, in fact, so erratically that we pilots believe it was a drone, due to the excessive g [gravity] forces required to pull those maneuvers that were almost continuous rolls, loops, etc.

Air traffic control (ATC) was unable to give the captain any information about the small aircraft, and could not confirm whether it was a UAS aircraft and, if so, if it was civilian or military.

One month earlier, the first officer on a corporate jet was flying an approach to Leesburg (Virginia) Executive Airport when, as he said in his ASRS report, “we got a TA [traffic alert] followed by an RA [resolution advisory] climb. … The captain spotted the unannounced aircraft closing on us from below and to the left. The distance on the TCAS indicated 200 ft at the closest readout.4

The captain questioned ATC about whether the other aircraft might have been a UAS aircraft, and in response, “a supervisor came on line to answer questions and only acknowledge that they were tracking via radar a VFR [visual flight rules] target but didn’t say where it was.”

A number of recent near collisions involving UAS aircraft also have been reported, including a July occurrence in which two men were accused of operating a UAS aircraft that nearly struck a New York City police helicopter near the George Washington Bridge5 and a May report that crews of two airliners had spotted a UAS aircraft flying nearby at 6,500 ft as they approached Los Angeles International Airport.6

The UAS story that may have garnered the most attention was the FAA’s reckless-flying penalty against Raphael Pirker, who in October 2011 used a small UAS (with an aircraft weighing less than 5 lb [2.3 kg]) in making a promotional video for the University of Virginia.

The FAA assessed a $10,000 civil penalty, based in part on video that showed the UAS aircraft’s flight under bridges and over the heads of pedestrians on the Charlottesville campus. However, the penalty was dismissed by the NTSB administrative law judge who had jurisdiction in the matter and who said that the FAA did not have authority over small UAS. The FAA is appealing the ruling.

In Australia, the “rapid growth in the popularity of so-called drones and a corresponding rise in the number of safety incidents” have prompted the Civil Aviation Safety Authority (CASA) to begin a review of its rules for safe recreational flying of remotely controlled model aircraft.

The first of the three occurred Sept. 12, 2013, while the pilot of an Ayres S2R was engaged in aerial agricultural spraying near Horsham, Victoria. About the same time, the pilot of a senseFly eBee arrived at a neighboring mine site to conduct an aerial photography survey.7

The UAS pilot completed his pre-flight preparations and conducted a risk assessment, and then heard an aircraft operating about 1 km (0.5 nm) away. The UAS pilot “broadcast on the area frequency advising his intention to conduct unmanned aerial photography operations over the … mine site” and specifically addressed his message to the “ag aircraft operating northeast of [the] mine site.”

Hearing no response, he asked the mine manager to contact the farmer and request that he advise the agricultural pilot of the UAS operation.

The farmer complied, telling the pilot that “there would be an ‘aircraft’ conducting aerial photography” near one of the fields where he would be working, the report said. “The pilot assumed that this would be a fixed-wing aircraft operating at or above 500 ft AGL [above ground level]. Accordingly, he intended to remain at or below 350 ft to ensure separation.”

In Australia, UAS aircraft must be operated at or below 400 ft AGL, unless special approval has been granted for operations at higher altitudes; in those cases, notices to airmen (NOTAMs) are filed with Airservices to inform other pilots of the operations.

At one point, the UAS operator put his aircraft in a holding pattern to avoid the crop duster, which was operating between 100 and 150 ft AGL, the ATSB report said.

Although the two aircraft came within 100 m (328 ft) of each other, the Ayres pilot told investigators that he never saw the UAS aircraft and was unfamiliar with UAS procedures.

He also said that he believed that UAS aircraft “present an additional hazard to those already encountered by pilots conducting agricultural operations, particularly as they are very difficult to see.” He added that a collision with the UAS aircraft “may potentially have resulted in aircraft damage due to ingestion into the engine, windscreen damage or pilot distraction.”

The UAS operator said he considered it unlikely that a collision with his eBee — a foam, carbon fiber and composite structure with a 96 cm (3 ft) wingspan and takeoff weight of less than 700 g (1.5 lb) — would have caused damage.

The ATSB said the incident “highlights the challenges associated with having a diverse mix of aircraft operating in the same airspace and the need for all pilots and operators to remain vigilant and employ see-and-avoid principles.”

The UAS operator said that in the future, he would insist on speaking directly to the pilot of any aircraft known to be operating in the same area where he plans to fly — an action endorsed by the ATSB, which said all pilots “need to recognize that small UAVs may be difficult to see.”

The other two Australian incidents, both of which occurred in March 2014, were characterized as near collisions. Both were categorized as serious incidents involving “interference from the ground.”

In the March 19 incident, a de Havilland DHC-8 was in controlled airspace at 3,800 ft AGL on approach to Perth Airport when the crew saw “a bright strobe light directly in front of the aircraft,” the ATSB final report said. “The light appeared to track towards the aircraft, and the crew realised that the light was on an unknown object, possibly [a UAS aircraft]. The pilot took evasive action, turning towards the west to avoid a collision.” The gray cylindrical object passed within 100 ft vertically and 20 m (66 ft horizontally) of the airplane.8

The airspace below 3,500 ft above mean sea level was military airspace, but the Australian Defence Force said there were no military UAS operations at the time. There was no alert from the airplane’s TCAS, the ATSB said.

Three days later, on March 22, a Bell 412 had just taken off from a Newcastle, New South Wales, hospital bound for a helipad 2 nm (4 km) away when “a steady white light,” identified as a UAS aircraft, appeared and crossed in front of the helicopter, then made two abrupt turns — first flying away from the helicopter and then back toward it. As the helicopter began descending toward the helipad, the pilot saw the UAS aircraft “hovering in position” just above it, the ATSB said. The pilot’s transmissions during the incident on the common air traffic advisory frequency netted no responses.9

The ATSB’s final report quoted CASA as saying the UAS aircraft probably was a first person view vehicle equipped with a camera that “enables the operator to fly it remotely whilst looking through either a pair of goggles or at a screen. … Use of these goggles does not provide a line of sight vision of the UAV.” 