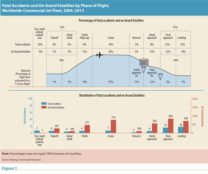 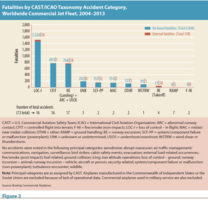 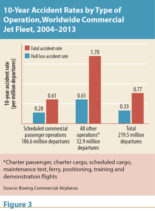 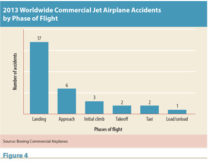 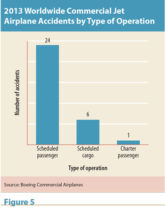 The data were analyzed in Boeing’s Statistical Summary of Commercial Jet Airplane Accidents, Worldwide Operations, 1959–2013. The aircraft manufacturer publishes similar sets of statistics on an annual basis. The statistics are for worldwide commercial jet airplanes that are heavier than 60,000 lb (27,216 kg) maximum gross weight, but exclude airplanes manufactured in the Commonwealth of Independent States or the former Soviet Union because of the lack of operational data. Commercial airplanes operated in military services also are excluded unless a military-owned commercial jet transport is used for civilian commercial service. Also, definitions related to the development of statistics in the summary are primarily based on corresponding International Civil Aviation Organization (ICAO), U.S. National Transportation Safety Board (NTSB) and Flight Safety Foundation terms.

ICAO and the U.S. Commercial Aviation Safety Team (CAST) have chartered the CAST/ICAO Common Taxonomy Safety Team (CICTT) to develop common taxonomies and definitions for aviation accident and incident reporting systems. The CICTT Aviation Occurrence Taxonomy is designed to permit the assignment of multiple categories as necessary to describe an accident or incident. In addition, CAST assigns each fatal accident to a single principal category.

For 2013, Boeing counted 31 commercial jet airplane accidents, of which 17 (55 percent) occurred during the landing phase (Figure 4). Of the remaining 14 accidents, six occurred during approach, three during initial climb, two during takeoff, two during taxi, and one during load/unload operations. Four of the 31 accidents were fatal accidents, and an additional four involved serious injuries. A serious injury is defined as one sustained by a person in an accident and that, among other factors, requires hospitalization for more than 48 hours commencing within seven days from the date the injury was received; results in a bone fracture; causes severe hemorrhage, nerve, muscle or tendon damage; or involves injury to any internal organ. There were 62 on-board fatalities and no external fatalities in the four fatal accidents.

Twenty-four of 2013’s accidents occurred during scheduled passenger operations; six occurred during scheduled cargo operations and one during a charter passenger flight (Figure 5). Of the 31 accident airplanes, 25 suffered substantial damage, defined as “damage or failure that adversely affects the structural strength, performance, or flight characteristics of the airplane, and that would normally require major repair or replacement of the affected component.” Five of the 31 accident airplanes were categorized as destroyed and one was characterized as having no damage. In that case, a ground worker delivering final paperwork to the flight deck before takeoff fell from the entry door and was seriously injured. Thirteen of the accident airplanes were considered hull losses.