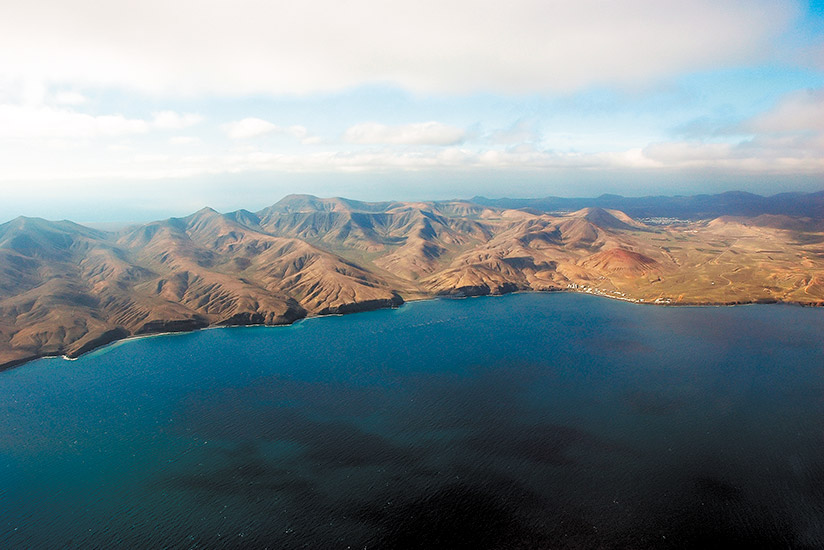 Canarias ACC manages an oceanic sector of the EUR-SAM Corridor, the route system that connects Europe with South America and operates according to standards of reduced vertical separation minimums (RVSM) and required navigation performance (RNP 10). The route system has one southbound airway and one northbound airway on the western side of the sector, and two bidirectional airways on the eastern side. Typical airline flights from Europe go from the Canary Islands south to Cape Verde and Senegal, then across the South Atlantic Ocean via Brazil to that country and other destinations in South America. Airlines flying to Europe similarly use these airways, de Diego said.

The EUR-SAM Corridor is monitored by the International Civil Aviation Organization (ICAO) through its South Atlantic Monitoring Agency (SATMA), based at Canarias ACC. SATMA annually publishes data about airspace utilization and safety indicators, focusing partly on LHDs and their contributing factors. The ACCs along the corridor have agreed to report this information in the common interest of risk management.

“The southernmost sector of the Canary Islands is a non-radar sector,” de Diego said, noting that the ACC’s controllers and six collateral controllers also lack very high frequency (VHF) radio communication with flight crews, and their high-frequency (HF) pilot-controller radio communication is limited by ionospheric activity. “[The tracked aircraft] do not have any radar coverage between 200 and 400 [nm, 370 and 740 km] south of the islands.” Airlines can fly free route, random route or in the airways if their aircraft are RVSM–approved for RNP 10 and equipped with HF communications. Although the Canarias ACC is equipped for automatic dependent surveillance–contract (ADS-C) controller-pilot data link communication (CPDLC), ADS-C CPDLC is not mandatory, so only about 60 percent of Canarias ACC’s air traffic uses this equipment.

“At the controller working positions, [we] cannot provide any ADS-based separation. It’s only for watching and monitoring,” de Diego said, so for all traffic separation, controllers rely on non-radar procedures such as RVSM-based, VOR-based [VHF omnidirectional radio–based], time-based and geographically based separation. “Usually, [we] have the traffic flowing in the corridor southbound or northbound at nighttime — between 0100 to 0550 in the morning — and have very little traffic during daytime,” when the sector’s non-oceanic (desert) routes have a relatively light traffic flow.

*Note: A total 59 LHDs were reported, including 56 on the four airways shown and three on random routes (not shown).

An interim solution to the limitations, as noted, has been verbal coordination among positions. “[As the executive controller equipped with] SACCAN and the CPDLC text terminal … you would text a clearance to the traffic. … You don’t say anything about it, you just text it,” de Diego said. “So you develop a new coordination issue because you have to tell your planning controller what you are actually doing. So it’s kind of increasing the workload. Also, the [executive controller] position doesn’t have any short-term [or] medium-term conflict alarm — only the flight strips. VHF communications are handled by non-ATC [non-air traffic control] staff [directly connected by telephone line for] the position.”
APROCTA’s analysis of ACC data for 2012 and 2013 found that its air traffic volume decreased about 8 percent, but LHDs increased, and this has been consistent with corresponding safety reports by SATMA (Figure 1 and Figure 2).4 “[For] 60 percent of incidents being reported in the corridor, usually … one [aircraft was entering the sector] at, say, Flight Level 380 [approximately 38,000 ft, but] the coordination was made automatically at a different level or with no revision in the [position] update in more than five minutes. The types of incidents are also increasing in severity through the years. [ICAO classification C, an aircraft proximity (airprox) in which no risk of collision existed] incidents are most of them because, in a non-radar environment, you don’t have the capability to actually measure how much separation was lost. So most of the severe incidents are just [recorded] as ‘Charlie.’”

*Note: The total number of reported LHDs was 59..

APROCTA’s safety assessment also produced findings and recommendations about Canarias ACC controller training, experience and duty-rotation factors thought to be relevant to LHDs. “Right now, we have the sector rotation [in the] daytime every 37.5 minutes, while the average time in the sector for an aircraft flying … is 45 minutes. … You jump to a radar sector and back again to a non-radar sector, so it’s quite a challenging scenario for an air traffic controller. … One action performed by one controller could affect not [just] the next one but the next two [controllers].”

The nighttime duty rotation is similar, with the jump from a radar position to a non-radar position occurring at one-hour intervals, he said. The last upgrade to SACCAN software in mid-2012 involved a human-machine interface enhancement with a display that appears similar to a radar screen but, as noted, cannot be used for air traffic separation. APROCTA found this to be a source of confusion as controllers jump between radar and non-radar displays, de Diego said.

As to maintaining certification and recency of experience, “the minimum time for air traffic controllers to be proficient at the position is [controlling aircraft] 40 minutes every 60 days, and that’s usually the standard,” he said. “The maximum occupancy [of aircraft in the corridor] … happens at 0100 to 0300 southbound and at [0100 to] 0500 northbound, so you can have controllers [for whom] it could be over a year that they don’t actually work [enough traffic to accumulate 40 minutes] in the position.

“Today, many of the air traffic controllers’ competence assessments are happening in the position without any traffic at all because they’re only scheduled [to work in the] daytime, and it could happen that they have no traffic or maybe just one [aircraft].”

In pre-automation days, controllers did not perform tasks unless they were directly related to air traffic services (ATS), he added, but automated systems add closely timed workload by requiring controllers’ attention 45 minutes, 30 minutes and 15 minutes before each aircraft transfer between sectors. “Increasing the non–ATS tasks to be done increases the chance to make an error,” he said, citing manual entry of similar flight numbers with a mouse and keyboard as being prone to controller errors and also contrary to controllers’ expectation of work-saving benefits from the automation.

Canarias ACC controllers also have found that CPDLC text messaging, which may take a minute to complete all pilot-controller verification steps, has been a constraint in situations in which controllers must react and communicate quickly. Finally, controllers initially qualified for nighttime-sector rotations in 2009 have not received refresher training since then, he said.

Among Canarias ACC controllers, APROCTA observed that one prevalent belief is that bureaucracy has increased, and that, regarding automation tools, the controller “works for SACCAN, not SACCAN for [the controller].” The association considers two controllers and one radio operator, reliant on verbal communication of their decisions, to be “too many professionals involved in the decision making.”

In summary, de Diego said, APROCTA’s safety recommendations seek to make ADS-C and CPDLC equipage mandatory for airlines operating in the EUR-SAM Corridor; to separate EUR-SAM routes from EUR-GVSC (Sal Oceanic FIR Routes to/from Cape Verde) for medium-haul aircraft that are not equipped with ADS-C; to implement “real SACCAN automation” until SACTA integration occurs; to provide air traffic controller training with ATC simulators and on the job; and to redesign controller roles so that only the executive controller performs tasks involving direct data interchange with the collateral controllers and the controllers in the room.

Positive steps already have been taken in the Canarias ACC, partly from analyzing contributing factors in LHDs — notably, refresher training on procedures and the introduction of ADS checklists and aircraft-handover checklists, he said. Nevertheless, implementation of some past safety recommendations from other sources — for example, incident reviews too brief to be meaningful and repetitive reminders to publish air safety report investigations online — have proven to be ineffective in reducing the risks of LHDs, according to de Diego.