Study pinpoints most frequent locations of flights by small drones. 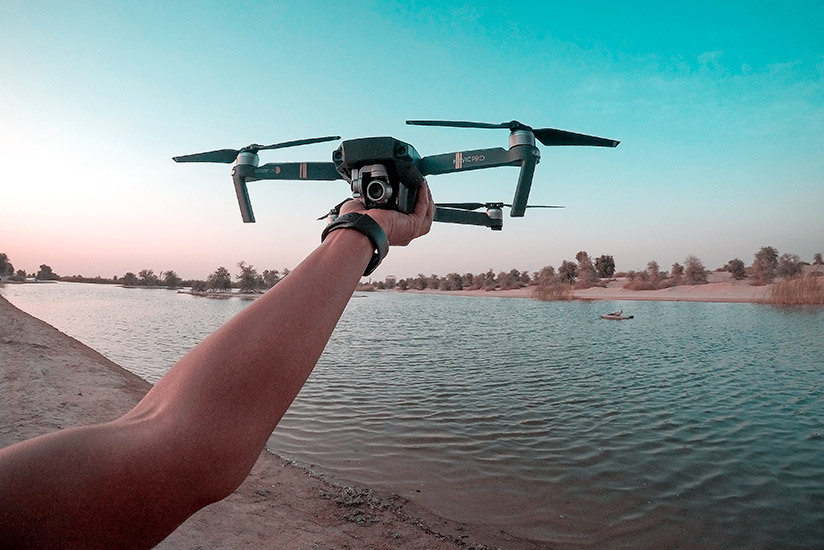 A localized study designed to learn where small unmanned aircraft systems (sUAS) are most often flown and to gauge the likelihood of a conflict with manned aircraft has found that nearly 97 percent of sUAS flights in the Daytona Beach, Florida, area during the study period were within 5 mi (8 km) of an airport.

The study, published in an Embry-Riddle Aeronautical University (ERAU) journal,1 gathered data indicating that 49 percent of sUAS operating locations are in residential areas. Other frequently used sUAS flight locations are in commercial, industrial or public places, “primarily in parking lots or other adjacent open areas,” the report said.

The report, “Evaluating Small UAS Near Midair Collision Risk Using AeroScope and ADS-B,” noted ongoing efforts by the U.S. Federal Aviation Administration (FAA) and others to prevent unsafe and noncompliant sUAS operations, and cited data from the Government Accountability Office (GAO) showing that from June 2007 through May 2018, the FAA took action against 518 sUAS operators for unsafe or unauthorized operations.

“Despite these diverse efforts to curb unsafe or noncompliant sUAS operations, the problem seems to be accelerating,” the report said, citing additional GAO data that showed there were 6,117 reports of potentially unsafe use of sUAS from February 2014 until April 2018. The FAA reportedly expects “an elevated risk of unsafe UAS operations as more UAS platforms integrate into the NAS [National Airspace System],” the report said.

The report noted that the GAO has concluded that there is a lack of reliable sUAS operational data — a problem that has complicated FAA safety efforts. Too few efforts have attempted to directly sample and evaluate such data, the report said, adding that this study was intended to address that shortcoming.

The study was aimed at evaluating potential safety hazards and interference with manned aviation associated with sUAS in the Class C controlled airspace around Daytona Beach International Airport (DAB).2

The study’s goals were to identify the common characteristics of sUAS operators and flight locations, to gauge the potential effects of sUAS activity on airports and aviation operations and to determine the effectiveness of geofencing restrictions in keeping sUAS flights from entering protected areas.

Researchers stationed a DJI AeroScope — described by the manufacturer as a “drone-detection platform” that identifies unmanned aircraft communication links to collect a drone’s flight status, flight path and other information — atop a three-story building for 13 days in May 2018. At the end of the sampling period, researchers analyzed the data to determine the answers to the study’s key questions.

They identified 192 sUAS flights during that period, most of them on Wednesdays and Thursdays, although the report acknowledged that the results might be skewed because of the limited length of the data-collection window and other seasonal and temporal factors.

Drones were detected as close to the detection device as 0.83 mi (1.34 km) and as far as 10.58 mi (17.02 km), with 49 percent in residential neighborhoods and 22 percent on commercial, industrial or public property, the report said.

“Only 23 detections (12 percent) occurred near unimproved land and parks,” the report said. “This was an unexpected finding, as researchers anticipated that most operators would select relatively open areas that offered a safety buffer from obstructions, urban structures and other hazards.”

The report said that researchers were most interested in learning the location of sUAS flights in relation to local airfields — three public airports, two private airfields, four heliports and one seaplane base. The study identified drones flying as close as 0.5 nm (0.9 km) to the public airports and as close as 0.35 nm (0.65 km) to the heliports. Of the 190 data points (two other data points were disregarded because they contained no geolocation information), 96.8 percent were detected within 4.34 nm (8.04 km) of some sort of airfield, and 84.2 percent were within 4.34 nm of more than one airfield.

Researchers reviewed the sUAS locations and compared them to the Daytona Beach area’s FAA UAS Facility Map (UASFM), intended to serve “as a barometer for potential interference with manned aircraft operations,” the report said. The FAA says that this map, and others like it for airspace around other airports, depict the maximum altitudes in which the agency may authorize non-hobbyist UAS operations under Federal Aviation Regulations Part 107 without requiring additional safety analysis.

The FAA’s Low Altitude Authorization and Notification Capability (LAANC) — the system designed to help make use of UASFMs — had not been implemented at the time of the study, and as a result, compliance with UASFM altitudes was not mandatory; nevertheless, the report said that the data provide “a reasonable gauge of the risk posed to aerodromes around the sample area.”

Of the 190 data points, 93.2 percent were within a designated UASFM area, but at least 21.5 percent exceeded the maximum allowable altitude in that area, the report said, adding that this finding suggests that “more than one in five sUAS flights presented an unmitigated risk to nearby manned aviation operations.”

Further analysis aimed to identify areas of specific risk, such as sUAS flights along the coastline in an area frequented by manned aircraft engaged in banner-towing operations. In one instance, the report said, data showed a sUAS along the coast at 462 ft, with one manned aircraft 0.3 nm (0.6 km) away at 650 ft. A second aircraft was slightly father from the sUAS at 475 ft.

“Considering the low altitude and slow speed, it would be difficult for these aircraft to safely perform evasive maneuvers,” the report said.

Another sUAS was spotted at 90 ft and within 0.25 nm (0.5 km) of the approach path to DAB’s Runway 7L. Seconds earlier, an aircraft had been on approach to that runway, and “it is highly probable that the aircraft descended through the UAS altitude while on approach, the report said.

In all, eight drones were detected within 1 nm (2 km) of the airport’s center point, the report said.

Of the 190 data points, five indicated sUAS flying above 500 ft above ground level, including three that were above 1,000 ft AGL. Most flights, however, were around 200 ft.

All of the sUAS flights detected during the study period were found within geofencing zones, the report said. Geofencing involves the use of programmed flight restrictions to restrict sUAS flights in or near areas that would create safety or security risks — such as airports, critical infrastructure and prisons — or to warn sUAS operators of their proximity to those areas. More than 85 percent of the drones were in one of the lower-level warning zones. Some 7.4 percent were in authorization zones, where operators receive messages that the flight is restricted; they can then override the restrictions. The study found 6.3 percent of flights were in restricted zones, where flight is prevented unless the operator uses an “unlock” code from DJI.

The report included two recommendations, including one calling on manufacturers to consider modifying geofencing protections to match UASFM altitude limits and prevent sUAS flights in certain areas unless the operator first obtains an unlock code.