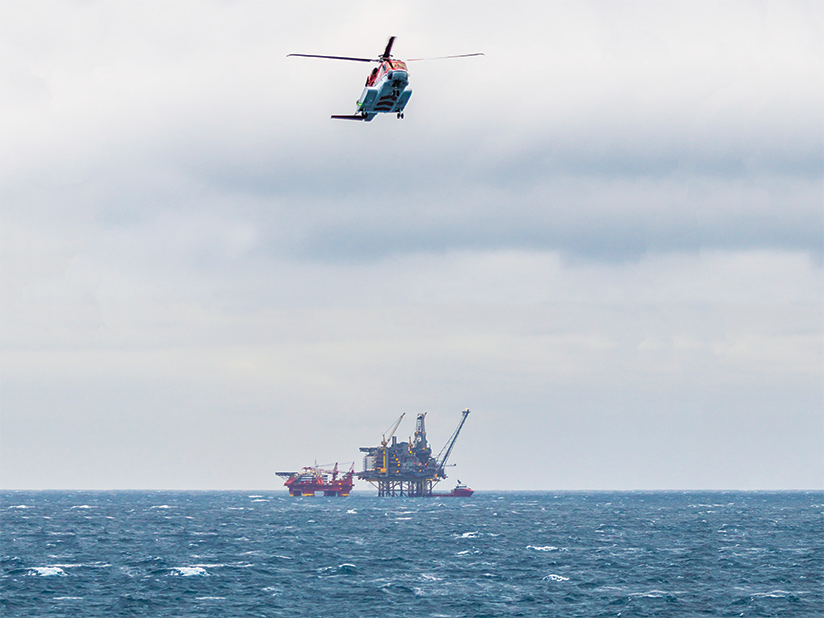 The Basic Aviation Risk Standard for Offshore Helicopter Operations (BARS OHO), released in late May, is aimed at identifying and mitigating “the unique threats associated with this challenging environment” — including controlled flight into water, wrong-deck landings and helideck obstacles, the Foundation said in announcing the new standard.

“Having BARS OHO focused solely on offshore helicopter operations enables the unique threats associated with this challenging environment to be identified and mitigated,” the Foundation said. “Drawing on all available industry guidance and practices and developed with global industry expertise, this resulting international standard represents leading practice and addresses recent advances within the offshore sector.”

Aviation operations associated with these companies conduct hundreds of flights daily — often to transport workers to remote sites but also for geological surveys, photographic missions, medical evacuations and other operations. The flights often are conducted under challenging conditions and in areas that lack adequate infrastructure, regulations and safety standards.

Before BARS was introduced, aviation companies operating in the resource sector lacked common safety standards and often were subjected to multiple audits conducted according to varying standards; the resulting safety data were not shared.

In the five years of the BARS program’s existence, about 350 audits have been conducted according to its standard, and about 100 aircraft operators are part of the program, said Greg Marshall, Foundation vice president for global programs and managing director of the BARS program. Over that same time period, Foundation records show that more than 8,000 audit findings have been resolved and the number of accidents involving resource sector aircraft has been reduced

Like the BARS program, introduced in 2010 to help global mining and resource companies and their contracted aircraft operators address safety issues (see “In the Beginning …”), the 38-page BARS OHO “continues the theme of presenting a standard in a risk-based format using applicable threats and controls,” the Foundation said.

“The aim of providing a standard dedicated to offshore helicopter operations, as opposed to guidelines, builds upon the success of the BARS program … and provides greater focus on the threats and challenges unique to the offshore helicopter environment.”

Greg Marshall, Foundation vice president for global programs and managing director of the BARS effort, added that the BARS standard is “a more effective and efficient way for organizations to manage their aviation risk. The BARS program provides opportunity for productivity and efficiency gains without compromising safety assurance while still giving greater insight into contracted aviation risk. It is also beneficial for offshore helicopter operators to be routinely contracted to a common standard, with a single audit [of their operation conducted] on behalf of multiple customers.”

The risk-based BARS OHO standard meets or exceeds industry guidance, the Foundation said, adding that it allows offshore oil and gas companies that do not have an internal aviation department to “confidently focus on their operational aviation risks by contracting to an industry standard, kept current and effective by all stakeholders through a structured review and approval process.”

Its statement of purpose makes clear that the standard is intended to supplement the requirements of national and international regulations regarding offshore helicopter operations and to help both the operators and the companies that contract for their services.

The document’s format also is “intended to assist all company personnel engaged in coordinating offshore helicopter activities to better understand and manage the aviation risk to their operations,” the Foundation said.

The standard is presented using the “bow-tie model” — a risk-evaluation method that uses a diagram resembling a bow tie — to help visualize the relationships between major threats to offshore helicopter operations and the controls designated to manage them, as well as the response and recovery measures that should be used in case of an accident. 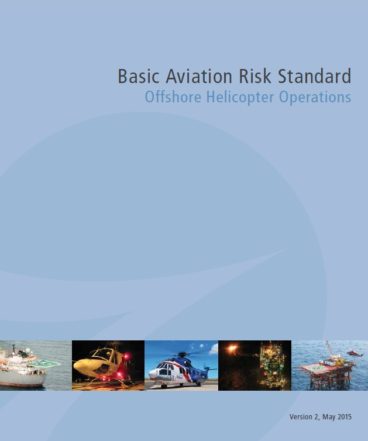 The controls to counter those threats include 11 “common controls” — those that can be widely applied against a number of threats to safe operations — divided into three categories:

The standard emphasizes the need for operators to demonstrate “an active commitment to safety,” with a positive safety culture and safety leadership skills and behaviors throughout their work force. An SMS is essential for identifying “actual and potential safety hazards” and assessing their risks, the standard said.

More specific controls that apply to individual threats are presented as the next layer of the bow-tie model.

For example, Figure 1 depicts the threat of loss of control of a helicopter, either on the ground or in flight, and the six controls that can mitigate the risks involved. One of the controls is the operator’s automation policy, and the standard explains that “an autopilot or automatic flight control system (AFCS) must be fitted for night or IFR [instrument flight rules] flights.

“Where an autopilot or AFCS is fitted, the aircraft operator must have an automation policy that ensures the appropriate use of automation to reduce cockpit workload. The policy must also include procedures for manual flight control to maintain flight proficiency.”

The other controls call for accurate measurements of the pitch, roll and heave of floating vessels where helidecks have been constructed “in order to provide accurate and reliable readings to be communicated to the helicopter from the vessel.”

In addition, the controls call for aircraft operators with long-term contracts to have an SMS that includes a flight data monitoring program “to systematically analyze and make proactive use of digital flight data from routine operations to reduce risk and provide operational feedback” and for operators on long-term contracts to include a line operations safety audit (LOSA) as part of its SMS. The LOSA program must be “structured, … using trained observers to collect data on routine flights, on a de-identified, nonpunitive basis, on flight crew response to threats and errors,” the standard says.

The standard also singles out the threat of CFIT/W and presents 11 controls to counter the threat (Figure 2), including special attention to flights at night or in instrument meteorological conditions (IMC).

For example, before night flights are begun from new operating locations, the aircraft operator must conduct a risk assessment of that location, determining the availability and effectiveness of night search-and-rescue (SAR) resources, their response times and predicted survival times of occupants, considering environmental conditions and the availability of survival suits and other mitigating measures, the standard says.

The special risks of flights at night and in IMC are addressed with several recommendations, including those calling for a two-pilot, instrument-rated crew in a multiengine helicopter being flown on an IFR flight plan, and for initial and recurrent simulator training.

Specific controls for risk mitigation during night and IFR flights include policies and procedures for stabilized approach and mandatory go-around requirements, as well as company support for “no-fault” go-arounds; training in crew resource management or threat and error management; use of a terrain awareness and warning system as well as a radio altimeter; and airborne radar approach requirements for operations to offshore destinations.

Among other threats in offshore helicopter operations are “heliport and helideck obstacles” (Figure 3). The five specific controls include “airport and helideck design,” and the standard says that all new helidecks should be built in compliance with standards laid out in the International Civil Aviation Organization’s (ICAO’s) Annex 14, Volume II, “Heliports,” and be designed “to accommodate the largest helicopter anticipated for use in the life of the structure.”

Another documented helicopter-specific threat, the wrong-deck landing, occurs when a helicopter lands on the wrong helideck or hovers over the wrong helideck, the standard says, noting that this error results in “escalating the risk of other threats, reducing defences if the helideck crew are not prepared, and posing a hazard to personnel on the installation” (Figure 4).

Controls include the marking of installations and vessels to enable the crew of an approaching helicopter to verify its identity by the time they reach the landing decision point. “Where similar installation/vessels are in the same area, special care must be taken to make markings unambiguous,” the standard says.

Crewmembers also must have access to instrument approach charts during flight planning and during the flight to aid in visually identifying the destination installation or vehicle and other nearby facilities.

Other controls call for aircraft operators to have a process for determining — during the flight planning process — the relative risk of a wrong-deck landing; for flight crews to confirm the location of mobile vessels before flight; for staffed installations and vessels to have a procedure for verifying that a helicopter is on approach to the correct facility and an ability to provide feedback to the flight crew; and for clear markings to be used in the event that a helideck is closed, the document says.

Additional controls call for upper-torso restraints in all crew and passenger seats and specify that the restraints should be used at all times, and direct operators to equip each helicopter with a public address system that will enable passengers to hear and understand crew instructions, even while wearing hearing protection.

SAR/emergency response and recovery measures include advance development of an emergency response plan “commensurate with the activity undertaken,” the standard says. Under a related control provision, offshore installations and vessels also must have plans in place to handle aviation emergencies.

Another component of the SAR/emergency response measure calls for operators to conduct risk assessments for all operations in hostile environments to determine whether it is necessary to contract with a dedicated SAR provider to supplement existing services.

The standard’s appendixes describe ideal qualifications for flight crews engaged in offshore operations, noting that pilots-in-command (PICs) of large multiengine helicopters — those greater than 5,700 kg (12,566 lb) — should have at least 3,000 total flight hours, including 2,500 hours as PIC and 25 hours at night offshore, and should hold an air transport pilot license.

Fewer total hours are required for pilots of multiengine helicopters weighing less than 5,700 kg and single-engine helicopters, but they also are expected to have at least 25 flight hours at night offshore. The standard also says that pilots in all three categories should have at least one year of flight experience in an area similar to the territory where they will be flying.