Polishing Up a PIC

An airline pilot offers tips for professionalism on, and off, the job. 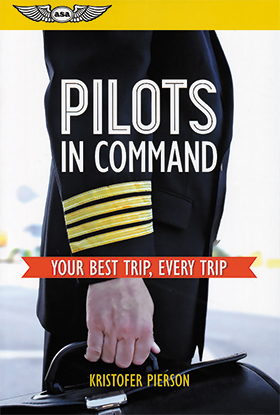 Pilots in Command: Your Best Trip, Every Trip

This book, by a pilot for a major U.S. airline, examines the non-flying aspects of a professional pilot’s job — from threat and error management and how to conduct a preflight briefing to how to talk to passengers and what to do during a layover.

Its primary intent, Pierson says, is to help “bridge the training gap” for captains moving up after spending time as first officers. He notes in his introduction that, “after years of expecting captains to simply evolve from the right seat to the left seat,” U.S. Federal Aviation Regulations (FARs) now call for airline transport pilot candidates to receive training in leadership, professional development, crew resource management (CRM) and safety culture.

Pierson devotes the first of his 11 chapters to “Defining a Pilot-in-Command,” offering the FARs’ definition and his own interpretation — that the pilot-in-command (PIC) is the only crewmember with total responsibility for the flight, from how the airplane is flown to how it is serviced.

“It starts with understanding all of the elements that are brought together to conduct an aircraft operation: airplane, cockpit crew, cabin crew, dispatch, maintenance, customers, cargo, refuelers, loaders, servicers, caterers — they all have a part in making the aircraft operation happen. And the PIC is responsible for every last one of them.”

In his discussion of CRM, Pierson notes that, in some operations, CRM has become “a lost art” that can be rediscovered by PICs who acknowledge several core truths, including that a crew will not work together if they misunderstand their personality differences, if they allow personalities “to become negative in the face of challenges,” if all crewmembers are not physically and mentally well and if all members do not comply with standard operating procedures.

“Good, safe pilots have an incredible sense of awareness of the personalities they deal with on the job, and they adapt,” he writes. “In the end, every pilot makes an assessment of their partner. Every pilot … naturally asks themselves, ‘Who is this guy next to me?’”

A general assessment of the other member of the flight crew should give every pilot a sense of “what level of professionalism to expect, what personal boundaries are in place [and] the amount of preparation the person has done for the flight,” he says.

“You will fly with people you absolutely dislike. But it is the understanding of that person’s personality that will make you effective as a fellow crewmember.”

After flying, the PIC should take a “leadership role in setting the tone for the layover,” Pierson says, noting that layovers exist to give crews time to rest and that under FARs Part 117, which spells out flight time limits and rest requirements, “it is against the law to not get a decent amount of sleep prior to any flight duty period.”

He suggests that each PIC develop a personal flight risk management program that includes learning how to sleep properly, “scheduling work (and life) with an eye on fatigue” and sharing knowledge about fatigue and sleep with others.

Pierson concludes with a chapter on “Tips, Tricks and Tools of the Trade,” including recommendations for cockpit organization, how to combat complacency and how to ease a return to the cockpit after a lengthy absence.

The Australian public generally believes that aviation safety has improved in recent years because of new developments in technology and more stringent safety regulations, according to this report on a September 2014 survey of public attitudes.

The survey, conducted in an online format, resembles previous surveys administered for CASA four times since 2000. The 2014 sample included 1,019 Australians aged 18 and older.

The report includes graphic depictions of the survey’s questions and respondents’ answers.

The survey found that 80 percent of those questioned believe that commercial airline flights in Australia are “just as safe or more safe now than they were five years ago.” Asked to identify the primary reason for the safety improvement, 38 percent cited advancements in technology, 23 percent mentioned airport security, and 12 percent noted new safety rules.

Of the 13 percent who believe that flights are less safe, 55 percent cited cost-cutting and the outsourcing of maintenance, and 24 percent cited security issues.

Seventy-five percent of those questioned said they were “confident about arriving safely if traveling on a commercial flight within Australia, and 3 percent said they were not confident. The primary safety concerns expressed by those lacking confidence were the “possibility of a disaster/crash,” inadequate aircraft maintenance and security issues.

This study of the U.S. Federal Aviation Administration (FAA) Airport Privatization Pilot Program reports that, during the 17 years of the program’s existence, only 10 of the nation’s 3,330 airports have applied for participation.

Of those 10 airports, two completed the privatization process, and one has since returned to public control. One application is undergoing FAA review, and seven other applications were withdrawn for various reasons, including “changes in market conditions that reduced expected privatization benefits,” the report said.

The study, conducted throughout most of 2014, included a review of FAA documentation and public docket information concerning each of the 10 applications, as well as visits to two of the larger airports that had applied for privatization — Chicago Midway International Airport, which remained in the public sector, and San Juan, Puerto Rico’s Luis Muñoz Marín International Airport, which completed the privatization process.

The study identified several factors that have resulted in reduced interest in airport privatization, including higher financing costs and the possible lack of property tax exemptions.

Although a privatization program — authorized by legislation passed in 1996 — eliminates some challenges to privatization, the transition “still requires considerable time and cost to navigate,” the report says. “Furthermore, public sector airport owners have found ways to gain some of the potential benefits of privatization without ceding control under full privatization, such as entering airport management contracts and joint development agreements for managing and building an airport terminal.”

The study found that it has been difficult to determine how privatization might affect airport efficiency, the federal aviation trust fund, federal tax revenues, airport employees and airport concessionaires.