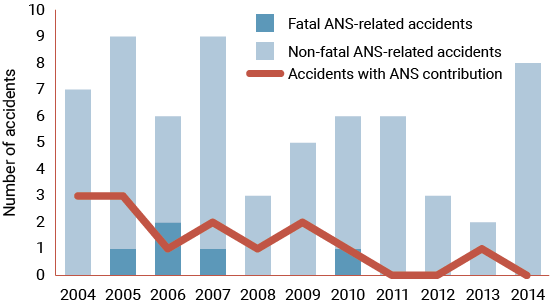 During the same time frame, one nonfatal accident “with ANS contribution” was reported, and nonfatal ANS-related accidents increased to eight in 2014, after a downturn that had lasted over several years, said the report, published in May.

“Overall, safety levels in Europe continue to remain high, yet with scope for further improvements in some areas,” the report said, noting that ANS has been a factor in two accidents in the past five years.

The document noted “a number of foreseen and unforeseen events in 2014,” and added that “the tragic loss of [Malaysia Airlines] MH17 in Ukrainian airspace in July was undoubtedly the most significant event in European airspace during 2014.” Preliminary reports indicate the Boeing 777 was shot down on July 17 as it crossed over an area of fighting between Ukrainian separatists and government forces. All 298 people aboard were killed.

As a result of the crash, the report said, “there was a notable shift of traffic.” Air traffic decreased 37 percent in Ukraine and 24 percent in Moldova but increased by 24 percent in Bulgaria and by smaller percentages in Romania, Hungary, Turkey and Slovakia.

Most ANS-related accidents in 2012, 2013 and 2014 were related to bad weather, the report said, citing data that placed seven accidents in that category (Figure 2). During that three-year period, four accidents were related to ground collisions, and one accident was recorded in each of five other categories. 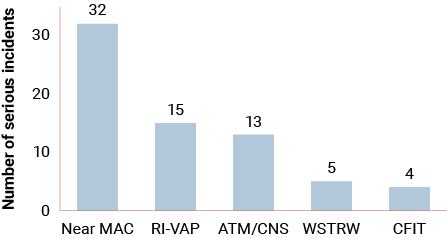 Eurocontrol data show that the number of separation minima infringements (SMIs) increased by almost 17 percent in 2013, the most recent year for which final data are available, to a total of 2,097 (Figure 5); of that number, 30 SMIs were classified as “risk-bearing.” Preliminary data for 2014 show 2,274 SMIs were reported, including 21 risk-bearing SMIs.

Notes: Severity B refers to a major incident, which Eurocontrol defines as one in which the safety of aircraft “may have been compromised.”

Severity A refers to a serious incident, which Eurocontrol defines as one that involves “circumstances indicating that an accident nearly occurred.”

Notes: Severity B refers to a major incident, which Eurocontrol defines as one in which the safety of aircraft “may have been compromised.”

Severity A refers to a serious incident, which Eurocontrol defines as one that involves “circumstances indicating that an accident nearly occurred.”

The report noted that, after a continuous increase in incident reporting between 2004 and 2012, the total number of incidents reported declined in 2013, down 17 percent from 2012 levels. “However,” the report said, “it is difficult to differentiate whether the decrease in 2013 is due to genuine safety performance improvements or a drop in the level of reporting.”

Final data from 2013 was submitted by 36 Eurocontrol member states, and 2014 preliminary data came from a record 40 states, the report said.

The report noted “the need to accelerate the deployment of automatic safety data monitoring to complement manual reporting.”

The document also called for an “improved understanding of how the various elements of the ATM [air traffic management] system contribute to overall safety levels,” adding that such understanding “not only helps to better identify risk areas today but also how modifications to the system could improve performance in the future.” 