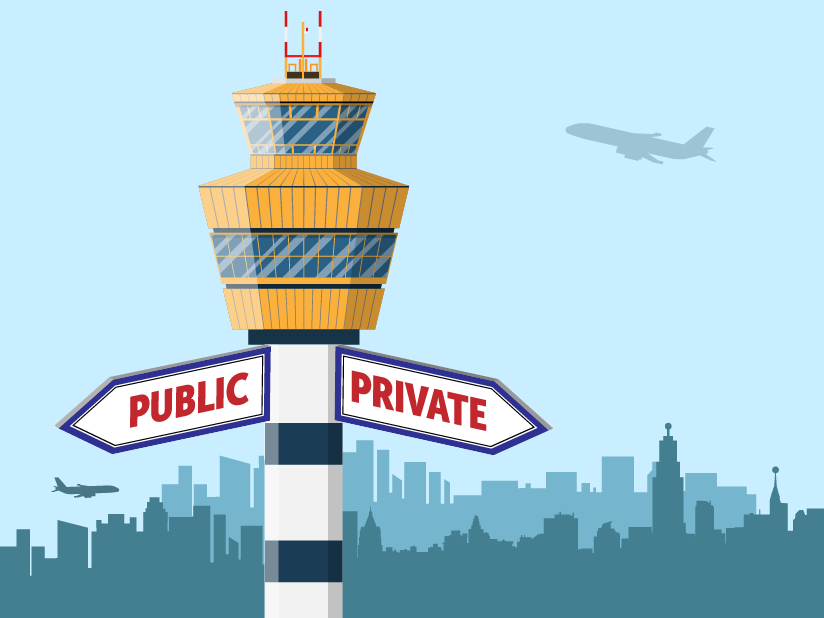 A new round of proposals to modernize and privatize the U.S. air traffic control (ATC) system is generating support for modernization but a mixed reaction to the idea of turning over one of the U.S. Federal Aviation Administration’s (FAA’s) primary responsibilities to a private enterprise.

ATC privatization has been proposed numerous times in the past. The most recent round of discussion began with a June 5 proposal from President Donald Trump to move ATC operations to a new non-government entity. This new, “more nimble” ATC would “more quickly and securely implement Next Generation (NextGen) technology, which will reduce aircraft delays and expand the availability of the National Airspace System for all users,” the White House said.

Two weeks later, leaders of the aviation subcommittee of the House of Representatives Transportation and Infrastructure Committee introduced a bill to reauthorize FAA operations for the next six years, including a provision that the committee said would “separate our antiquated … ATC service from the federal government and help finally modernize the system.”

Around the same time, the chairman of the Senate Commerce, Science and Transportation Committee, John Thune, a Republican from South Dakota, said a similar privatization proposal lacked the required votes to be approved by his panel. Instead, he said, the issue might be discussed later by the full Senate or in a special House-Senate committee responsible for ironing out differences between the two bodies on FAA funding legislation; before any privatization measure can become law, approval of the full House of Representatives, the Senate and the president is required.

Despite the Senate committee’s lack of support for privatization, its House counterpart pushed ahead, approving its version of the legislation in late June, just before a congressional recess.

“We have the busiest aviation system in the world, and though it’s safe, it’s also inefficient, costly and unable to keep up with growing demand or developing technology,” said bill co-sponsor Rep. Bill Shuster, the Pennsylvania Republican who chairs the committee.

Another co-sponsor, Rep. Frank LoBiondo, the New Jersey Republican who heads the aviation subcommittee, said the committee’s discussion of the legislation, including the provision to turn ATC services over to an independent nonprofit organization, demonstrated “a clear consensus the status quo is not working and more can be done to move our aviation system into the 21st century. Without sacrificing the safest system in the world, the U.S. can and must move to a more efficient and effective system for future growth.”

Under the House proposal, ATC traffic management services would, after a three-year lead-in period, be turned over to a new nonprofit organization managed by a board of directors made up of representatives of the aviation community; ATC services would be financed through a system of user fees. The FAA would remain in charge of ATC safety oversight, as well as research and development, but 30,000 workers now on the FAA payroll would be moved to that of the private operation.

The move would “remove ongoing air traffic modernization efforts — NextGen — from the dysfunctional federal procurement system, which has slowed research, delayed acquisitions and increased costs,” LoBiondo wrote in an op-ed column in The Press of Atlantic City.

He blamed FAA management for “red tape and reliable excuses” that threaten to push the eventual cost of the NextGen transition to double or triple the initial $40 billion estimate and blamed Congress for passing short-term resolutions to keep the FAA running rather than full-fledged reauthorization plans that would lay the groundwork for several years of NextGen spending. Among other problems, partial government shutdowns in 2011 and 2013 disrupted vital NextGen research and delayed implementation of various parts of the modernization program, he said.

He argued that separating ATC from the FAA would encourage stable funding, largely through user fees — but that provision is among those that have generated opposition, much of it from small operators and local airports.

In a statement issued at the start of this year’s discussions of the pluses and minuses of ATC privatization, FAA Administrator Michael Huerta said he supports consideration of
“new ways to help us provide stable and sufficient funding to more rapidly modernize our system, while maintaining the highest level of safety.”

Huerta called proposals to privatize ATC services, “a step in a process that needs to involve all users of the airspace system and deliver benefits to the system as a whole.”

Opponents of privatization argue that the proposed legislation does not meet that goal.

“We can roll the dice with this risky privatization plan and hope it will bring improvements after several disruptive years of transition, or we can go with my targeted alternative that will fix the biggest problem facing the FAA — stable, predictable funding,” said Rep. Peter DeFazio of Oregon, the ranking Democrat on the House committee. DeFazio introduced an amendment to the House legislation that was designed to continue FAA operation of ATC while guaranteeing uninterrupted funding; the committee rejected his plan.

DeFazio argued that the FAA has been developing the key elements of NextGen — en route automation modernization; aircraft routing based on information from global positioning systems; automatic dependent surveillance–broadcast; and electronic flight strips, for example — but that ATC has suffered because of congressional actions that have repeatedly disrupted critical FAA services.

In addition, he said that airlines have not done their part in equipping their airplanes with ADS-B transponders — required to enable use of the ADS-B system.

‘Problems With the Status Quo’

But LoBiondo noted that the legislation backed by committee Republicans has the support of most — but not all — organizations representing pilots, air traffic controllers and flight attendants.

In the past, Rinaldi has said that NATCA was open to any similar proposal, “as long as it addresses the problems with the status quo and is not a for-profit model.”

Those “problems with the status quo,” he said, have involved repeated shutdowns of the system because of congressional budget disputes, and ongoing uncertainty about not only future funding levels for ATC operations but also the continuing development and implementation of NextGen technology.

The Air Line Pilots Association, International (ALPA) said that it supports the committee proposal, but the organization emphasizes that membership on the board governing ATC operations must include representatives of ALPA, NATCA and other key stakeholders.

The National Business Aviation Association (NBAA) opposes the legislation because of its provisions for “a breathtaking giveaway of sweeping authority over the national … ATC system to a new entity governed by private interests.”

NBAA President and CEO Ed Bolen noted that his organization has always supported modernization of the aviation system.

“But let’s not confuse modernization with privatization,” he added. “Our nation’s ATC system is and always will be a monopoly, and that monopoly must operate in the public’s best interest. This bill proposes to strip control over that monopoly from the public’s elected representatives and essentially hand sweeping authority to a group of private parties, which will likely make decisions based on their business interests.”

Bolen noted that NBAA and five other organizations representing business and general aviation had joined in support of a statement in late 2016 opposing an earlier version of Shuster’s proposals. The organizations — also including the Aircraft Owners and Pilots Association, the Experimental Aircraft Association, the General Aviation Manufacturers Association, Helicopter Association International and the National Air Transport Association — called instead for “reforms, short of privatization, [to] better address the FAA’s need to improve its ability to modernize our system.”

The legislation approved by the committee differed from the 2016 version, with fewer seats on the board designated for airlines and an exemption from user fees for general aviation, but the general aviation groups said the changes did not go far enough to win their support for the bill.

Most airlines have supported the legislation, and when the proposal was introduced, Airlines for America praised it for recognizing “that the status quo is not working and that we must take bold, innovative action to modernize our nation’s ATC infrastructure.”

Delta Air Lines, however, has consistently opposed privatization, releasing a study in early 2016 that warned of increased costs to consumers under a private operation and arguing that removing ATC services from the FAA would interrupt the progress that the FAA is making on research in and implementation of NextGen technologies.