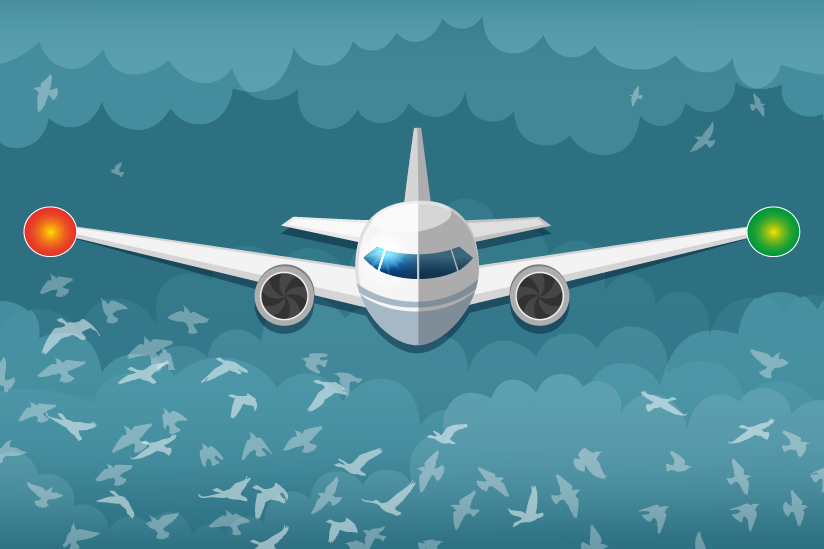 Correction: The positions of the navigation lights in this illustration were inadvertently reversed. The red light should be on the airplane’s left wing and the green light, on the right.

Birds fly into the left side of airplanes significantly more often than they strike the right, perhaps because they are less able than humans to perceive the red navigation lights on the left wings, according to a study by bird strike experts.1

The experts — Richard Dolbeer, a retired U.S. Agriculture Department scientist who has led numerous research efforts aimed at resolving human-wildlife conflicts, and William J. Barnes, CEO of Lumen International and holder of several patents pending for bird strike–reduction technologies — concluded that modifying the red, left-wing navigation lights and adding supplemental lights that have been designed specifically for avian vision could help birds notice the aircraft around them and reduce the number of bird strikes.

“Aircraft lighting can influence the ability of birds to avoid collisions with aircraft,” said the report on their study, published in the Spring 2017 issue of Human–Wildlife Interactions. “We recommend that some simple operational changes in commercial aircraft procedures, such as using the leading-edge wing illumination lights at night, especially during periods of nocturnal bird migration, could enhance bird avoidance of the aircraft.”

The most recent bird strike data from the U.S. Federal Aviation Administration (FAA), released in late 2016, reported a record 13,795 wildlife strikes to aircraft in 2015, more than 95 percent of them involving birds. The year’s total represented a 1 percent increase from the 13,692 strikes recorded in 2014 and a 7.4-fold increase from the 1,847 strikes reported in 1990, the first year of record keeping.2

Nevertheless, the report said that the civil and military aviation communities “continue to understand that the threat from aircraft collisions with wildlife is real and increasing,” and noted that, worldwide, since 1988, more than 262 people have been killed and more than 247 aircraft have been destroyed in collisions between aircraft and wildlife.

Efforts to reduce the number of bird strikes through wildlife management programs, especially removing habitat and food sources and using dogs, birds of prey, loud noises and other “harassment techniques,” have succeeded at airports and their immediate surroundings, the report noted. Efforts outside the airport environment have had little effect.

Previous studies have determined that increases in bird populations and the advent of aircraft with quieter turbofan engines have led to an increase in bird strikes.

“Thus, another approach recommended for reducing strikes is to make aircraft more visibly detectable by birds,” the report said.

Other studies have found that communication towers that are equipped with red warning lights have recorded more bird strikes than towers that have lights of shorter wavelengths, the report said, adding that the results “may be related to vision in birds being generally less sensitive than in humans to the red end of the spectrum.”

The report cited two studies in particular, including:

These and other similar studies prompted the FAA to change its standards for the lighting of obstructions, including eliminating the use of “steady-burning red lights from several obstruction lighting configurations,” the report said.

In the current study, the authors reviewed the FAA National Wildlife Strike Database from January 1990 through July 2015 to determine whether red navigation lights on airplanes’ left wings were attracting birds and resulting in more strikes on the left side of airplanes than on the right.

The form used to report a bird strike asks respondents to check a box indicating which part of the aircraft was struck; the only parts associated with the left or right side of the airplane were the number one engine (left side) and the number two engine (right side). In their review, the authors examined only records that discussed a bird strike to one of those engines and excluded records that involved strikes to both engines or to neither engine. Their subsequent analysis noted the aircraft model and whether the strikes occurred during daylight, darkness or at dawn or dusk.

Their analysis concluded that in airplanes with underwing-mounted engines, a total of 3,522 strikes (53 percent) were recorded on engine number one, and 3,121 strikes (47 percent), on engine number two. “This difference of 401 strikes was highly significant … compared to the expected probability of 50 percent of strikes for each engine,” the report said. “For all three categories of time of day (day, night, dawn/dusk), more strikes were recorded for engine number one, compared to engine number two.” Left engine versus right engine strikes were most similar at night, however. Among aircraft models with underwing-mounted engines, Boeing 737s recorded the sharpest differences in left engine versus right engine bird strikes, the report said, adding that bird strikes of Airbus aircraft were about evenly divided between left and right engines.

The examination of bird strikes on airplanes with fuselage-mounted engines found that, overall, 1,200 (56 percent) of strikes were recorded for engine number one and 949 (44 percent), for engine number two. Again, the imbalance occurred at all times of day, but the differences were smallest during dawn and dusk. McDonnell Douglas DC-9/MD-80 series airplanes recorded the sharpest differences in left engine versus right engine bird strikes while strikes involving Bombardier Canadair Regional Jets were evenly divided.

When data for both groups of airplanes were combined, the results showed 4,722 strikes (54 percent) were recorded on the number one engine and 4,070 (46 percent) on the number two engine (Table 1).

“It was surprising that the bias was least prevalent at night and dusk/dawn when aircraft lighting would be expected to have the largest influence.”

The report noted, however, that the contrast between airplanes and ambient background conditions also must be considered.

“Because 99 percent of strikes occur at [less than] 3,000 m AGL [9,843 ft above ground level] when landing lights typically are on, day or night … this difference for strikes in low-light conditions compared to full-daylight strikes may be explained by the brightness of landing lights overwhelming the navigation lights under these low-light conditions,” the report said. “Anti-collision strobe lights used on some aircraft may also overwhelm navigation lights at night.”

The report said that another explanation for the imbalance between left engine and right engine bird strikes might be birds’ “behavioral lateralization in escape behavior” — that is, a natural tendency for some neural functions to be more dominant on the left side of the brain than the right, or vice versa.

Studies of birds that have been struck by aircraft indicate that they “take evasive maneuvers in attempts to avoid being struck by aircraft,” the report said, citing a 2010 report that ‘found a greater incidence of major injury to the left side compared to right side of a sample of 92 birds struck by aircraft.5