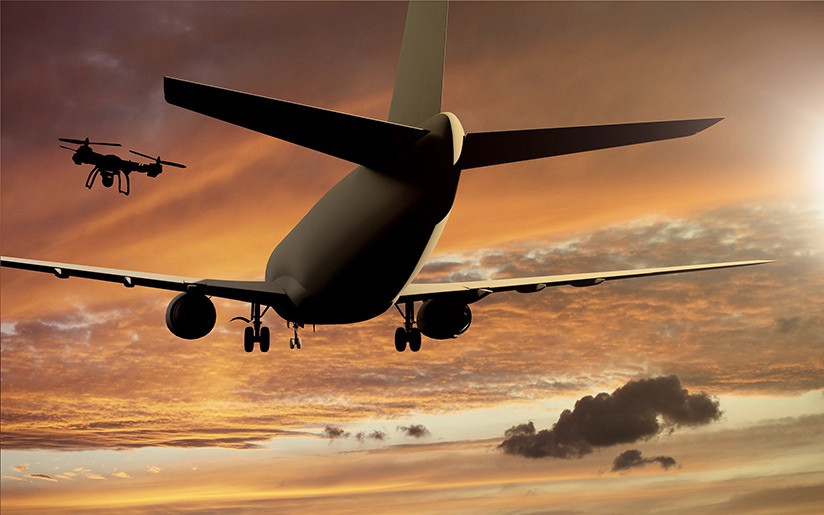 Aircraft encounters with improperly operated drones represent a major safety risk, largely because of “the unpredictability of the operators and inability to pinpoint their location,” according to data collected by the International Air Transport Association (IATA).1

The data took the form of a five-year trend analysis included in the IATA Safety Report 2018, which was released in April. The analysis, which had been requested “in recognition of the increased threat from UAS [unmanned aircraft systems, as drones are sometimes known] encounters,” was intended as an aid in identifying specific issues associated with encounters between manned aircraft and drones.

“As the use of UAS is rapidly increasing, so, too, is the related risk of associated incidents and/or accidents, which make[s] the risk mitigation of these illegal UAS operations that much more difficult to manage,” the report said. “One of the main concerns is the unpredictability of the operators and inability to pinpoint their location.” 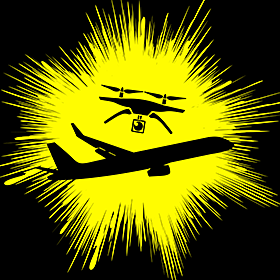 The IATA analysis examined data gathered worldwide on drone-related events from 2012 through 2016. A review of the IATA Safety Trend Evaluation, Analysis and Data Exchange System (STEADES) identified 548 reported events from that period; after 68 reports were classified as “out of scope,” the final dataset included 480 reports — a number that the report characterized as under-representative of the likely number of actual occurrences. As a result, IATA sought additional data from aviation safety agencies and other industry stakeholders.

“Various agencies confirmed having higher number of occurrences than those represented in the STEADES database, some of which were supplied to the GADM [IATA Global Aviation Data Management] team,” the report said. The additional information was not combined with the STEADES data, partly because there was no way of identifying and eliminating duplicate reports and also because the various investigative agencies used different methods of classifying the occurrences.

Despite the inconsistencies in occurrence reporting, data showed a significant increase in reported drone occurrences beginning around 2014.

Nevertheless, the report said, “it is likely that, globally, UAS incidents are heavily underreported, with differing mandatory reporting requirements. During the gathering of information for this analysis, the GADM team found instances of some states having disparate reporting requirements between the regulator, safety agency and ANSPs [air navigation service providers] and a lack of clarity concerning which body was responsible for the collection of UAS data.

“Further masking the issue is the lack of a single UAS reporting standard for flight crew to input consistent reports. While UAS categorization and certification is weight-based, the safety reports and summaries submitted by flight crew describe UAS by size, color and, where possible, by type. Until such time that there is full alignment across the industry, it will be difficult to understand the full scale of the threat posed to aviation operations.”

In its analysis of the STEADES data, the report said that half of the reports of drone occurrences came from the European region, and 29 percent came from North America (Figure 1).

Only 23 percent of the reports mentioned the size of the drone; in some cases, the descriptions were not specific. For example, the report noted one description of a “blue, fairly large drone” and another characterization of a drone “the size of a tire.”

Seeking to develop a standardized method of classifying drone size, the GADM team used three categories in its analysis:

In reports that mentioned the size of the drone, 50 reports (45 percent) said that the devices were large.

Nearly all of the reports (472, or 98 percent) described the type of encounter, the report said, adding that it grouped the encounters into one of three types, each based on the vertical and horizontal proximity of the drone to the manned aircraft:

The report cited the description of one event that was included in a pilot report:

On approach at about 1,700 ft, an inert nonorganic object approximately one foot [0.3 m] across (up to 18 inches [0.5 m] max) struck the aircraft immediately below the captain’s windshield and bounced off and down the left upper side of the aircraft. Both pilots saw the object strike, and left-seat pilot witnessed accompanying noise. ATC [air traffic control] informed. Engines assessed quickly as sound, and eventless landing. Police report filed. Other aircraft markings: pale yellow color.

Most events occurred when the manned aircraft was on approach, the report said, noting that of the 448 reports (93 percent) that specified the phase of flight, 59 percent cited approach; descent and climb were each cited by 9 percent, takeoff by 8 percent, cruise by 4 percent and landing by 3 percent.

Of the 480 reports, 10 involved events that activated the manned aircraft’s traffic-alert and collision avoidance system, including three resolution advisories (RAs), three that began as traffic advisories (TAs) and escalated to RAs and three TAs.

As an example, the report cited one report’s narrative:

On a 2- to 3-mile [4- to 6-km] final, we received a TA for traffic immediately in front of us. While I flew the aircraft, (the first officer) looked closely ahead of us and saw a UAV [unmanned aircraft vehicle] approximately 2 to 3 ft [0.6 to 0.9 m] in diameter that had the main body of yellow, with multiple rotors (at least four) that emanated from the body. We estimate that it missed us by 100 ft to 200 ft and was exactly on the centerline of the ILS [instrument landing system approach]. It happened so fast that we had no time to avoid, but would have certainly caused (extensive?) damage to the aircraft had it impacted us. Had we observed it earlier, we would likely have taken evasive action. The TA we received had no altitude reported, just a yellow target on the screen. We passed exactly over the top of it.

In 64 percent of the reports, ATC was aware of the drone, and controllers took various actions to counteract anticipated problems, including diverting manned aircraft, closing the airport, directing pilots to hold or to go around, or directing them to maneuver away from a drone. In some cases, pilots initiated some of these actions.

The report noted that unplanned holds and diversions presented new risks for those in the manned aircraft, and cited the following example:

The crew were given an expected approach time by ATC, and based on this, they committed to destination. When subsequently the airport closed with undetermined delays [due to a drone being spotted], the crew gave ATC a minimum fuel advisory, an alternate was contacted, and a diversion arranged.

The airport closure resulted in over 25 flight diversions, stretching the resources far beyond the capacity available for normal operations at the alternate airport.

In this case, reports indicated that attempts were made to locate the drone operator, but there was no indication whether the effort was successful.

IATA concluded that it is continuing to work with the International Civil Aviation Organization, national civil aviation authorities and other stakeholders on safely incorporating drones into civilian airspace. Key components of this work involve what the report called “the development of effective safety and security risk reduction strategies and performance-based regulations governing the operation of UAS.”