Round Up the Unusual Suspects

Some accidents remain baffling or suspicious long after their occurrence. 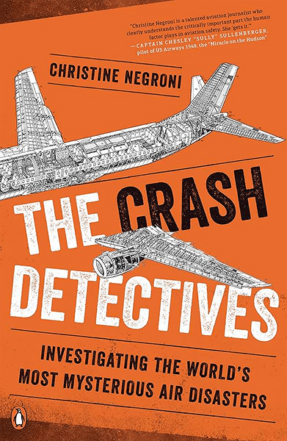 No matter how lengthy, painstaking and difficult an aviation accident investigation may be, causal factors usually are determined through standard procedures, such as examining the wreckage and analyzing cockpit voice and flight data recordings and transponder signals from the accident aircraft. But a few accidents puzzle the experts and give rise to competing theories, remaining unresolved even after years. In The Crash Detectives, aviation journalist Christine Negroni examines controversial cases that refuse to fit into standard categories or yield their secrets.

The author leads with a discussion of one of the more recent accidents that mesmerized the news media and the public: the disappearance of Malaysia Airlines Flight 370 (MH 370) en route from Kuala Lumpur, Malaysia, to Beijing on March 8, 2014. For weeks, the event saturated the media, even when new developments were lacking — no news was news.

The search for the wreckage of the Boeing 777-200ER originally was concentrated in the area around the airplane’s planned flight path. Eventually, a team from Inmarsat provided satellite data showing that MH 370 had continued flying for seven hours after radar contact had been lost, and further, had changed course and flown south, opposite the direction of its intended route.

“My theory is that an electrical malfunction knocked out systems on the Boeing 777 and that the plane lost pressurization, incapacitating the pilots,” Negroni says. “Likely, the men in the cockpit were overcome by the altitude sickness known as hypoxia, which robbed them of the ability to think clearly and land the plane safely. Many of the links in the bizarre chain of events that night can be explained by hypoxia because past cases have shown how rapidly those who fall victim to it turn imbecilic.”

Although the disappearance of a large airplane is rare, Negroni points out that “over the past century of commercial aviation, more than a dozen airliners have disappeared without a trace.” As an early example, she cites the Hawaiian Clipper, a Pan American Airways Martin M-130 flying boat designed for trans-Pacific routes. In July 1938, after five days and 56 hours of flight, the airplane — with its nine crewmembers and six passengers — vanished on the last leg of the trip to Manila, Philippines. “No piece of the plane, no luggage or cargo, and no airplane fluid or fuel would show up,” Negroni says.

As with MH 370, the lack of physical evidence provoked various theories, some of them sinister. The Pearl Harbor attack was three years in the future, but tension in Japanese-American relations was already developing. “The Japanese were suspected of having a role” in the Hawaii Clipper’s loss, Negroni says. To accommodate stopovers, Pan American built several full-service Pacific island bases. Japan was concerned that they could be quickly converted into military use. Far-fetched as it sounds, a theory arose that the Japanese navy had somehow hijacked the airliner and forced its crew to fly to a Japanese-controlled island, where they executed them and the passengers. Similar rumors of Japanese interference had circulated a year earlier when the plane in which Amelia Earhart and her navigator Fred Noonan were attempting a round-the-world flight went missing on the way to a stop at Howland Island in the Pacific.

By international law, the nation of the crash site leads the investigation (although authorities and technical specialists from the operator’s country normally participate). That can lead to differing viewpoints and perhaps differing standards based on the local resources available for the detective work.

On New Year’s Day in 1985, a Boeing 727-225, Eastern Airlines Flight 980, struck Mount Illimani near La Paz, Bolivia. “Because everything about the accident except the location was American, people from the NTSB [U.S. National Transportation Safety Board], Boeing, Eastern and the airline’s unions had a right to participate, and to some extent they did,” Negroni says. “A number of them went to Bolivia, but little of what they learned there shed light on what happened.”

What an NTSB air traffic control specialist, Michael O’Rourke, “found on visiting the tower at La Paz was a post–World War II–era setup. He was very concerned about the age of the equipment and the lack of maintenance. … The equipment had been installed nearly 40 years earlier and had never been checked.” There was no way to determine whether the equipment had been working correctly on the night of the accident.

But what most hampered the investigation was that the wreckage was near the mountain crest at more than 19,000 ft, nearly inaccessible. In October 1985, the NTSB sent a climb team that with great difficulty reached the site, but they were unable to find the flight recorders — or much of anything pertinent to the investigation.

Negroni says, “Even before the [NTSB] climbers left for La Paz, the Bolivian Board of Inquiry on Accidents and Incidents had written its report. It had been submitted on Sept. 4 and concluded that ‘the accident was apparently caused by the aircraft’s deviation from its airway.’ It was a statement of the obvious that didn’t include any of the information the NTSB had gathered. Of course, it was a deviation from the airway — the airway didn’t cut through the mountain. The question was why the plane was where it should not have been. If there was any effort made to find the answer, it wasn’t in the report.”

More disturbing are allegations that advanced countries, including the United States, have been economical with the truth in drawing conclusions from accident investigations.

On Dec. 12, 1985, a McDonnell Douglas DC-8-63CF operated by Arrow Air crashed almost immediately after takeoff from Gander, Newfoundland, Canada. The 256 occupants, many of them U.S. Army soldiers returning from a peacekeeping deployment in the Middle East, all died. “The flight was a U.S. military charter on an airline associated with the CIA [U.S. Central Intelligence Agency],” Negroni says. “The cargo included mysterious boxes whose contents were never identified. In the cargo hold and the passenger cabin — if past flights were any indication — there was a super-size collection of weapons and ammunition, as soldiers stashed these kinds of combat souvenirs in their bags. Furthermore, the plane had been left unattended during extended stopovers in Egypt and Cologne, its intermediate stop on the way back to the United States. …

“Four bystanders who saw the DC-8 in its brief flight across the sky said they saw fire or a glowing light on the aircraft before it slammed into the woods. Yet information from these witnesses was dismissed.”

The toxicology results on the victims’ bodies “showed that more than half the victims had carbon monoxide or hydrogen cyanide in their systems, which indicates smoke inhalation,” Negroni says. An American pathologist said that the deaths had all been instantaneous. But deceased people do not inhale carbon monoxide or anything else.

In the findings of the Canadian Aviation Safety Board (predecessor of the Transportation Safety Board), the majority said that the most probable cause was “ice contamination on the leading edge and upper surface of the wing.” Four members of the nine-member panel dissented on the grounds that ice on the wings was an unsupported surmise; they speculated on an in-flight detonation that caused a fire. “It doesn’t take an overly active imagination to conclude that the United States was diverting attention away from the clues that the plane might have been lost because of a fire or explosion resulting from weapons or sabotage or a terrorist act,” Negroni says.

And there was the Mount Erebus accident investigation. The mountain was named, appropriately in this case, for darkness, born out of Chaos, in Greek mythology.

“Of all the air accidents linked to political intrigue, the Air New Zealand Flight 901 disaster over Antarctica seems the most incredible,” Negroni says. “Featuring lies, manipulation, document shredding, and burglary and set in one of the world’s most inhospitable places, it is a tale worthy of any tinfoil hat–wearing conspiracy theorist, except that it is true.”

Beginning in 1977, Air New Zealand scheduled one-day sightseeing trips over Antarctica. The equipment on Flight 901 was a McDonnell Douglas DC-10-30, and on Nov. 28, 1979 in the local summer, it struck 12,448-ft Mount Erebus on Ross Island, killing all 257 occupants.

“[The] shocking event was eclipsed by what happened next,” Negroni says. “The airline figured out how the plane happened to be over Mount Erebus; it was a terrible, tragic data entry error, as simple as it was unintentional. Rather than confess, however, the people at Air New Zealand decided to hide the truth by incriminating the pilots. …

“In an attempt to correct a data entry error made 14 months earlier, Air New Zealand changed by 2 degrees of latitude a waypoint on the routing. Rather than approach the continent over the flat terrain of McMurdo Sound, the plane would fly directly over Mount Erebus … . Even though this made for a very different flight path, the crew was not notified of the change.”

The airline chose to bluff its way out. The captain’s briefing notes and other documents found at the crash site went missing, and airline representatives even confiscated documents from the homes of the late crewmembers. Negroni says, “The airline was saying the pilots knew they were flying over Mount Erebus. But the briefing notes indicated otherwise. That’s why they were being snapped up. … And all this time, Air New Zealand’s chief executive Morrie Davis was ordering the shredding of crash-related documents.”

The great majority of aviation accident investigation cases are closed with reasonable certainty, providing insights that can lead to risk-reducing changes. Dealing with the technical and human factors aspects of accidents comes with the territory. Ideally, crash detectives would not be hampered by disappearing aircraft, international relations problems and cover-ups.

Despite the recovery of a few small pieces of wing flap, the main body of MH 370 has not been found after nearly three years, and the mystery continues.

The views and opinions expressed in The Crash Detectives: Investigating the World’s Most Mysterious Air Disasters, are those of the author and not necessarily those of Flight Safety Foundation.