Runway/taxiway excursions were the most common commercial aviation accident type in 2017, and although none of the accidents were fatal, runway safety generally continues to be a focus of the International Air Transport Association’s (IATA) Safety and Flight Operations team, according to the recently published IATA Safety Report 2017.

IATA said there were six fatal commercial airline accidents worldwide in 2017 that resulted in the deaths of 19 passengers and crewmembers. None of the six fatal accidents involved a passenger jet. Five of the fatal accidents involved turboprop aircraft and one involved a cargo jet: the Jan. 16, 2017, crash of a MyCARGO Airlines Boeing 747-400 freighter, which killed 35 people on the ground as well as all four crewmembers.

“Globally, the 2017 fatal accident rate was the equivalent of one fatal accident for every 6.7 million flights. If we look at it another way, using fatality risk, on average, a person would have to travel by air every day for 6,033 years before experiencing an accident in which at least one passenger was killed,” IATA Director General and CEO Alexandre de Juniac said April 17 at the IATA Safety and Flight Ops Conference in Montreal shortly after the Safety Report was released.

“Yet there is room for improvement. We experienced six fatal accidents involving turboprops and cargo flights in 2017, and we’ve had three commercial airline fatal accidents1 so far this year. In addition, we had some well-publicized events in which safety margins were compromised and the outcomes could have been far worse than they were.”

“As we review this year’s report, we see that again runway excursion is our most common accident,” Stephen Hough, chairman of the IATA Accident Classification Technical Group, said in a foreword to the report. “These often have differing contributory factors, such as manual handling, unstable approach, gear/tire failure or a combination of these. The fatality risk from these kinds of accidents is generally low, but a rate reduction in this common accident category is an area to concentrate on,” he said. Figure 1 shows the distribution of 2017 accident end states. 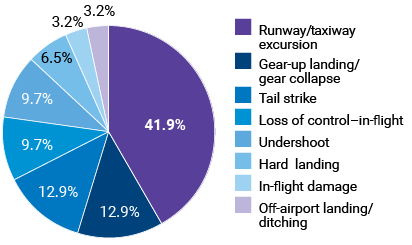 In the past five years (2013–2017) there have been 76 runway/taxiway excursion accidents with eight fatalities, according to IATA data. The majority of the accidents — 42 — occurred in either the Africa (21) or Asia/Pacific (21) regions, and 11 occurred in the Latin American/Caribbean region. Almost all of the excursions happened during takeoff, with a small handful occurring during takeoff or a rejected takeoff. Figure 2 shows percentage of all accidents over the past 10 years that were runway/taxiway excursions.

IATA uses a threat and error management (TEM) framework to identify the top factors contributing to various types of accidents. It breaks down the contributing factors into several categories, including latent conditions, which are conditions present in the system before the accident, made evident by triggering factors. These often are related to deficiencies in organizational processes and procedures. A threat is defined as an event or error that occurs outside the influence of the flight crew, but that requires flight crew attention and management to maintain safety margins. A flight crew error is an observed flight crew deviation from organizational expectations or crew intentions. An undesired aircraft state (UAS) is a flight crew–induced state that clearly reduces safety margins or is a safety compromising situation that results from ineffective TEM. An end state is a reportable event. The difference between end state and UAS is that UAS is recoverable but an end state is not.

IATA analysis shows that deficient regulatory oversight by the state, which is categorized as a latent condition, was a top contributing factor in 45 percent of excursion accidents over the past five years for which there is enough information to make such a determination. Accidents for which there is not sufficient information are excluded from this analysis. Meteorology, which is categorized as a threat and covers thunderstorms, poor visibility/instrument meteorological conditions, wind shear and wind-related issues, icing conditions and hail, also was a top factor in 45 percent of the excursion accidents. Long, floated, bounced, firm, off-center or crabbed landing was a factor in 43 percent, and manual handling/flight control errors were a factor in 38 percent.

In reviewing the 2017 accidents recorded in its accident database and coded by the Aircraft Classification Technical Group, IATA said the top threats encountered by aircraft involved in runway safety events were environmental factors, specifically wind shear and gusty conditions, which counted as a threat in 18 percent of the recorded accidents. Second in importance were issues with airport markings and signage, optical illusions or visual misperception.

In the Safety Report 2017, IATA made numerous recommendations regarding possible countermeasures and prevention strategies. The countermeasures generally were aimed at two levels: the operator or state responsible for oversight and the flight crew.

IATA’s runway/taxiway excursion–related recommendations to operators included training flight crews to go around from a long/floated/bounced/firm/off-center/crabbed landing; implementing a go-around policy; training flight crews to monitor and make effective call outs; defining the touchdown aiming point as the target; and using a flight operational quality assurance program to monitor compliance and reinforce a go-around policy and to monitor long landings.

Among the recommendations made to regulators and industry were encouraging implementation of a safety management system for all airlines; encouraging a policy of rejected landing in the case of long landings; requiring training in bounced landing recovery techniques and reviewing the International Civil Aviation Organization’s Global Runway Safety Action Plan, released in November, which identifies stakeholder mitigations to runway safety issues.

Runway excursions and loss of control remain the most common business aviation accident types, according to data presented to an FSF safety summit.

Low-performance air taxi airplanes did not share the accident-reduction success of their higher-performance counterparts, a new study says.