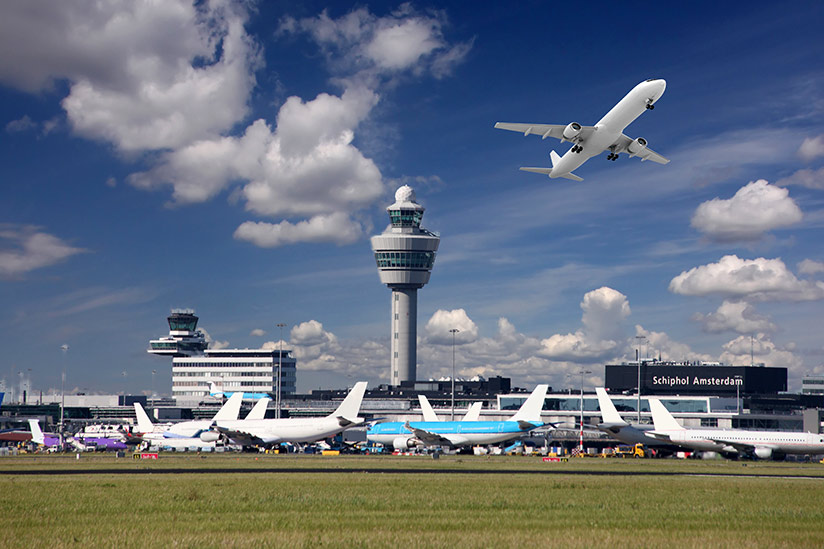 The Dutch air navigation service provider (ANSP) LVNL has introduced successfully a go-around detection system as safety net in the control towers at Amsterdam Airport Schiphol. This article explains the characteristics of this safety net and shares lessons learned about the operational introduction.

Schiphol is the Netherlands’ primary airport and one of the busiest in Europe with more than 1,500 movements per day. Schiphol has six converging runways, most of them used in two directions, for takeoff and landing. During daytime operations, three runways typically are in use simultaneously — either two for landing and one for takeoff, or vice versa.

The large number of aircraft movements, combined with strict environmental (noise) regulations and often fluctuating wind and weather conditions, result in a variety of runway combinations being used. Many of these runway combinations are considered to be dependent, meaning flight operations on one runway can affect flight operations on another. Dependent runway use is key to Schiphol’s operational concept and is important to achieve high airport capacity and sustainability under various circumstances. Extensive safety assessments have been performed to ensure this high capacity can be achieved while maintaining a high level of operational safety.

LVNL has implemented various mitigating measures to ensure safe use of dependent runways. For example, controllers in the airport air traffic control tower are trained on this specific type of operation and are made aware of potential consequences of a go-around. Procedures restrict the use of dependent runways (such as limitations on the use of some runway combinations under low visibility conditions), and takeoff clearances for departing aircraft are timed in relation to the positions of approaching aircraft.

However, even with mitigations in place, procedural guidelines often cannot be precisely applied in actual operations. The Aeronautical Information Publication for Schiphol instructs pilots flying approaches to “in case of missed approach inform ATC [air traffic control] immediately.” But during a go-around, with a potential high workload in the cockpit, the top priority of the flight crew is not communicating with ATC. The axiom “aviate, navigate, communicate” teaches pilots to fly the airplane first. Communication is a task to be performed when the situation is under control. ATC, therefore, is not always immediately informed of a go-around maneuver initiated by the pilot.

ATC procedures instruct the runway controller to monitor the landing to ensure a go-around is detected in a timely manner. But the controller has to perform multiple tasks and monitor multiple runways and may shift attention to another task when convinced an aircraft has landed.

A go-around is a normal phase of flight in which the pilot aborts the (final) approach. The go-around can be initiated by the air traffic controller or by the flight crew. Reasons for a go-around range from technical problems in the aircraft, to an unstabilized approach, to a blocked runway, to a cabin not being ready for landing. At Schiphol, approximately 350 to 400 go-arounds are performed annually.

In an operation such as Schiphol, with dependent runway use, timely detection of a go-around is crucial because a (late) go-around can lead to a major incident, such as occurred on May 10, 2015 at Schiphol.1 LVNL, therefore, investigated improving the probability of detecting a go-around, in addition to enhancing training and procedural measures. The solution is provided from the machine perspective (that is, through implementation of a system-based technical improvement): the introduction of a Go-Around Detection System (GARDS) at the Schiphol control towers as an additional safety net. Safety nets are defined by Eurocontrol as ground-based or airborne system functions that alert controllers or pilots to an increased risk to flight safety. With GARDS, it is the controller who is being alerted.

Before the decision was made to implement GARDS, years of work were completed on how to design a system that would have the anticipated benefit of timely go-around detection, but would avoid common safety net pitfalls, some of which are described below. A preliminary study by the Netherlands Aerospace Centre (NLR) investigated the technical feasibility of go-around detection. The demonstration of technical possibilities was followed by a study of operational feasibility, laying the foundation for the GARDS operational concept. The final project started in 2013 and led to implementation about two years later.

By that time, the technical approach had evolved into a design based on an algorithm that determines whether there is a deviation from the anticipated, nominal situation. “Tunnels” define the nominal approach paths and an aircraft moving out of these tunnels is detected. Although these tunnels are not physically presented to the air traffic controllers, it is an intuitive and easy to explain technical design that is well understood by non-technical experts. This helps to understand when the system generates an alert. The detection range of the tunnels is limited to 4.5 nm (8.3 km) before runway threshold because this area covers the most critical go-around situations.

The input data for the algorithm consists of ground radar tracks and multi-lateration data, with a one second update frequency. For GARDS, the update frequency and coverage of the surveillance data are crucial for a high system performance. A timely detection would not be feasible with a four-second update frequency, because subsequent inputs to the system take too long. The required surveillance infrastructure was available at Schiphol, enabling the reliance of GARDS on this source of information.

While a solid technical approach is crucial for system functioning, the full operational concept, including working practices, human factors aspects and a framework for operational use, determines whether the go-around detection system can be implemented successfully. A lot of attention was paid to the design of the operational concept in GARDS development. In June 2016, Flight Safety Foundation, Eurocontrol and the European Regions Airline Association dedicated their annual Safety Forum to the subject of safety nets. The key features of GARDS are linked below to some of the Safety Forum’s findings in order to explain how the design of GARDS mitigates common safety net pitfalls.

To investigate various design alternatives for GARDS and to validate the design concept, real time simulations were performed during the development of the system. These simulations supported design iterations that eventually led the system to be ready for implementation. For example, simulations helped to develop the human-machine interface. They also demonstrated the GARDS system in practice, by modelling historical go-arounds and replaying these on the simulator. Air traffic controllers were involved in these simulations and could verify system performance, which resulted in fine tuning of functional requirements of the system.

Experience has shown that innovative tools and systems are often appreciated during research and development, but that when it comes to actual implementation, operational acceptance can be a bottleneck. Underlying factors for resistance to implementation are, for example, when it becomes clear that a lot of training is needed when the existing way of working changes, or when the system is not reliable enough.

The GARDS project demonstrates that successful implementation of an innovative system is possible within a relatively short timeframe. Three major lessons can be learned from this project that are relevant more generally for the introduction of safety nets:

The implementation of GARDS highlights that innovation in air traffic management can progress from theoretical concepts to operational use within a short timeframe and with support of the air traffic controllers. While innovation is not easy in a safety-critical environment and sometimes requires a lot of effort, this project shows that an occurrence can be the starting point for the implementation of innovative systems.

Mariska Roerdink is the project manager for the Go-Around Detection System and a senior performance expert with Air Traffic Control the Netherlands (LVNL). She made a presentation on GARDS at the Flight Safety Foundation Safety Forum at Eurocontrol headquarters in Brussels in June 2016.

Editor’s Note: This article has been updated since it was originally published to include a link to Amsterdam Airport Schiphol.

The AAIB says a go-around incident might have been a result of the flight crew’s significant time away from flying during the pandemic.

‘Go Have a Look’ Approaches ‘Must be Stopped’

Rules on instrument approaches are too complicated, the Transportation Safety Board of Canada says.