The AS350 pilot was determined to complete the EMS mission despite ‘pretty thick’ fog. 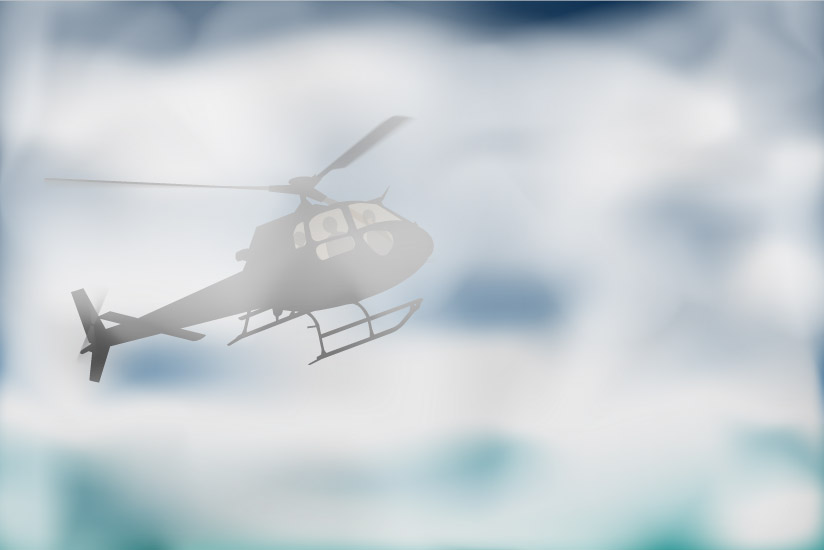 Moments before a Eurocopter AS350 B2 took off in fog and darkness from a motor vehicle accident site near Goodman, Alabama, U.S., the 5,300-hour pilot texted a friend that “the other guys would have turned around” rather than fly the emergency medical services (EMS) mission, the final accident report said.

The helicopter crashed into a farmer’s field 90 seconds after takeoff, killing the pilot, who was trained but not current for flight in instrument meteorological conditions (IMC); the patient; and two medical flight crewmembers, according to the report by the U.S. National Transportation Safety Board (NTSB).

The report said the probable cause of the accident, which occurred just after midnight on March 26, 2016, was “the pilot’s decision to perform visual flight rules [VFR] flight into night instrument meteorological conditions, which resulted in loss of control due to spatial disorientation.”

The NTSB identified two contributing factors: “the pilot’s self-induced pressure to complete the mission despite the weather conditions and the operator’s inadequate oversight of the flight by its operational control center.”

The report said that the Haynes Ambulance Communication Center (HCC) was asked by law enforcement authorities at 2319 local time on March 25 to respond to a motor vehicle accident near Goodman. The helicopter, registered to Haynes Life Flight and operated by Metro Aviation, left its base at the Troy Regional Medical Center at 2327 and arrived at the landing zone in a field next to the accident site at 2353.

The pilot remained in the helicopter with the engine running while the flight paramedic and flight nurse entered an Enterprise Rescue Squad ambulance to help prepare the patient for transfer to the helicopter. While he waited, the pilot texted a friend — a nurse who previously had been texting the flight nurse; most of their comments dealt with the weather.

The flight nurse had texted the friend at 2336 that there was “lots of fog!!!” and that “even he [the accident pilot] is like … Umm its pretty thick.”

As the pilot waited on the ground for the flight nurse and flight paramedic to prepare the patient for the flight, the pilot texted the nurse friend, “This was more than work. … Actually had to pull out some piloting skills.”

The friend responded, “That’s what you got those mad piloting skills for. … Was it bad?”

The pilot responded that the flight nurse could answer that question, “but put it this way the other guys would have turned around.” He added that he expected to depart the accident site to the south because “it’s the only place where weather is flyable” and that conditions were likely to be bad during takeoff but “after that should be good.”

The helicopter lifted off at 0016:45, bound for the Baptist Medical Center Heliport in Montgomery, about 80 nm (148 km) north, the report said. Radar identified the helicopter at 0017:35, in a shallow left turn and climbing to 1,000 ft above mean sea level. At 0018:04, the rate of turn began increasing. Four seconds later, still turning left, the helicopter reached its highest altitude — 1,100 ft — where it remained until 0018:28, when it began a rapid descent and hit the ground.

After failing to receive the typical 15-minute check-in from the pilot, the communication center checked the satellite tracking system, which was programmed to file updates every three minutes; the system had not updated and instead showed that the helicopter was still at the landing site. The operations center notified authorities, and searchers found the wreckage around 0700 in a heavily wooded swamp. 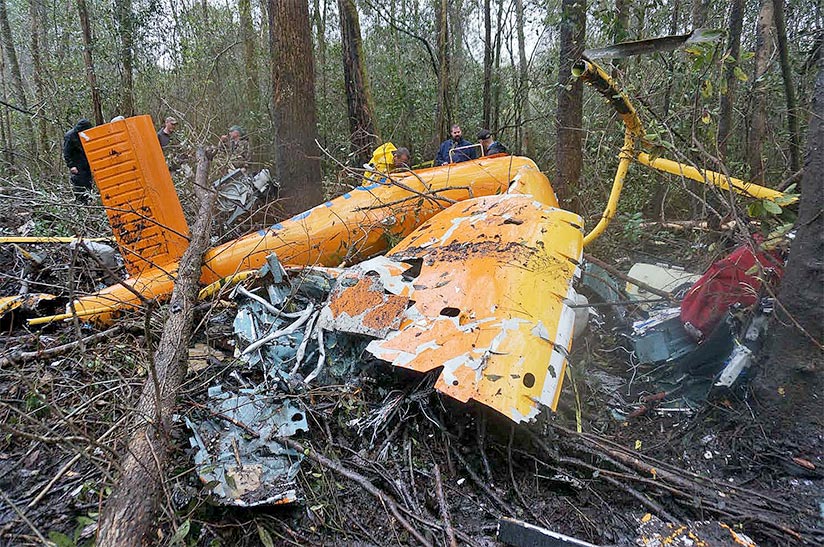 At the time of the accident, his flight experience included 474 hours at night and 265 hours in actual instrument conditions; he did not meet currency requirements for flight in IMC. Records maintained by Metro Aviation and PHI showed that he had undergone training in human factors and decision making, night operations, use of night vision goggles (NVGs) and inadvertent entry into IMC.

The helicopter, manufactured in 1998, had accumulated 8,923 operating hours. It was maintained according to an aircraft inspection program approved by the U.S. Federal Aviation Administration (FAA), and its most recent inspection was completed in February 2016. The helicopter was equipped with a night vision imaging system, including NVGs, a helicopter terrain awareness and warning system (H-TAWS), and an autopilot.

Metro Aviation was established in 1982 as a charter, flight training and maintenance organization, and began EMS operations the following year. At the time of the accident, the company operated more than 130 aircraft from 98 bases.

Haynes Ambulance began in Wetumpka, Alabama, in 1969 and was established in Montgomery in 1977; Haynes Life Flight began in 2014 and at the time of the accident, Haynes Ambulance/Life Flight was operating in three central Alabama counties and at Maxwell Air Force Base, with nine stations, two helicopters, 35 ground ambulances and 180 full-time and part-time emergency medical technicians and paramedics.

The Metro Aviation Operations Manual specified that the pilot-in-command was responsible for safety-of-flight decisions, and that operational control coordinators and supervisors were responsible for “confirming whether a flight or series of flights could be initiated, conducted or terminated safely,” in accordance with Metro Aviation procedures and applicable regulations. Operational control personnel also were authorized to terminate flights, the report said.

Fog Was ‘Kind of Pretty Thick’

Witnesses told accident investigators that fog and mist, along with reduced visibility, prevailed at the accident site when the helicopter touched down and also when it departed, 23 minutes later.

“According to one witness, there was slight drizzle around the time of the takeoff and, although there was no ground fog, there may have been fog above the trees,” the report said. “Another witness stated that there was a heavy mist, and the ceiling was ‘very low, maybe 100 foot.’ … Another witness stated that, at the time of the helicopter’s departure, the fog was mixed with rain and was ‘kind of pretty thick.’”

The closest official weather station was at Enterprise Municipal Airport, 4 mi (6 km) east-northeast of the accident site, where weather conditions at 0015 included visibility of 3 mi (5 km) in drizzle and an overcast ceiling at 300 ft above ground level. Other stations near the accident site also reported ceilings below 500 ft around the time of the accident, the report said.

Terminal area forecasts for two nearby airports — both issued “well before the time the pilot was notified of the mission,” according to the NTSB report — called for IMC at the time of the accident, as did an area forecast issued by the National Weather Service.

The Metro Aviation Operations Manual prescribed weather minimums for all VFR operations. They specified that weather conditions during night flights in “non-mountainous, local flying areas” with an approved night vision imaging system or H-TAWS must include a ceiling of at least 800 ft and visibility of at least 3 mi; in non-local areas, the minimum required ceiling was 1,000 ft.

The manual also specified that NVGs were “at no time … to be utilized to continue flight into weather below the minimums.” The accident pilot was seen wearing NVGs as the patient was being loaded into the helicopter.

Pilots were told to be aware of changes in the weather and environmental conditions in order to avoid inadvertent entry into IMC or losing sight of the ground. The manual warned them to be prepared for such situations and said that all company aircraft would carry instrument approach charts and low altitude en route maps for use in case of inadvertent entry into IMC or loss of visual ground reference.

The company’s Operations Manual also outlined its two-tier operational control system, which it said called for placing a current, qualified crew in an airworthy aircraft, and determining “whether a flight or series of flights can be initiated, conducted or terminated safely and in accordance with all policies, procedures, general operations manual and regulations.”

The report said that at the time of the accident, two OCC personnel were on duty — a trainee and a senior operational control coordinator — and they were using the “old” software system, which the trainee said “could crash while one was looking at it and flights could be airborne 15 minutes before a person was aware of it.” The longitudinal and latitudinal format in the software program was “a common problem,” and although coordinates for the motor vehicle accident were correct, the format was not, the trainee said.

Although the coordinators checked weather information on the night of the accident, “nothing drew their attention to the weather,” the report said, adding that the flight release showed that the requested flight route was from Troy to “the incorrectly formatted latitude and longitude coordinates”; the flight from the accident site to the hospital was not included. Because the software system did not recognize the incorrect coordinates, weather information was provided only for Troy Municipal Airport, 5 mi (8 km) from the helicopter’s base, which reported visibility of 10 mi (16 km) and a ceiling of 6,500 ft.

Subsequent updates showed that conditions were deteriorating, but the OCC did not forward the updated weather information to the pilot, the report said.

Metro Aviation provided weather information approved by the National Weather Service to its operational bases, and the information “would have been readily available to the accident pilot,” the report said. The document added that the pilot did not receive an official weather briefing from either Lockheed Martin Flight Service or the Direct User Access Terminal Service, and that such a briefing was not required. Accident investigators did not determine what type of weather information the pilot reviewed before the flight, but the report said that he had assessed conditions as “yellow,” which “indicated that commencing a flight may not be possible.”

If the pilot had again reviewed weather conditions after certain flight forms were filled out, various observations and forecasts would have described the low visibility and ceilings, the report said.

“There was no record of the accident pilot receiving or retrieving any additional weather information before the accident flight, or before and during the flight to the [motor vehicle accident],” the report said.

Without comment, the accident report cited FAA Advisory Circular (AC) 60-22, Aeronautical Decision Making, which says “pilots, particularly those with considerable experience, as a rule always try to complete a flight as planned, please passengers, meet schedules and generally demonstrate that they have ‘the right stuff.’”

The report noted that “get-there-it is” is one of the common problems discussed in the AC, which says that the behavior “clouds the vision and impairs judgment by causing a fixation on the original goal or destination, combined with a total disregard for any alternative course of action.”