The European Aviation Safety Agency (EASA) plans to conduct a “focused analysis” to understand why the rate of serious incidents involving commercial air transport (CAT) airplanes (maximum takeoff weight of more than 5,700 kg/12,560 lb) operated by carriers from EASA member states (MS) increased dramatically in 2016 from the previous year. In recently releasing its Preliminary Safety Review — 2017, EASA said the rate of serious incidents was 16 per 1 million flights in 2016, which is an increase of 77.8 percent from the nine serious incidents per million flights reported for 2015. The accident rate, however, declined 43 percent to three accidents per million flights, the agency said.

The only fatal accident last year involved a Bombardier CRJ-200 flown by a cargo operator. The plane crashed in Sweden on Jan. 8, 2016, during a night flight from Oslo to Tromso, Norway. Both pilots, the only two people on the flight, were killed (see “Upset by a False Cue”). In the last decade, there have been 12 fatal accidents involving operators from EASA member states, and one each year since 2014.

The number of accidents and serious incidents for 2007–2016 is shown in Figure 1. From 2012 through 2015, the overall trend in serious incidents was downward, but the number of serious incidents spiked upward in 2016 by 74 percent. EASA said the increase is primarily attributable to occurrences relating to aircraft system technical failures, runway excursions and loss of separation events.

Aircraft upsets represent only 3 percent of the accidents and serious incidents involving EASA MS operators in 2016; however, aircraft upset continues to be the “most fatal risk area” for EASA MS operators, the agency said. “In 2016, the preliminary impact assessment on “loss of control—in flight” indicated the need for specific actions in the area within the European Plan for Aviation Safety, which is a key strategic document for improving safety at the European level, EASA said. 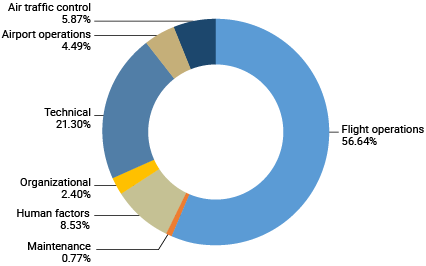 Security-related events, such as the Russian Metrojet crash in Egypt in 2015 and Malaysia Airlines Flight MH17, which was shot down over Ukraine in 2014, are not included in the totals. The Germanwings accident, in which investigators believe the copilot intentionally crashed the airplane to commit suicide; the EgyptAir A320 crash in 2016, which has not been confirmed as terrorist action; and MH370, which is still missing, are included in the global statistics.

Safety Report 2016 — made public in April, several weeks after the release of preliminary data — said the 2016 accident rate of 1.61 accidents per million flight sectors was 10 percent lower than the 2015 rate.

Overall, 2016 performance included 268 fatalities, an increase of 97 percent over 2015 but still below the previous five-year average of 371. Ten fatal accidents were recorded in 2016, up from four in 2015; of the 10 accidents, six involved cargo flights, IATA said. Two of the fatal accidents involved EgyptAir Flight 804, an Airbus A320 that crashed into the Mediterranean Sea on May 19, killing all 66 passengers and crew, and LaMia Flight 2933, an Avro RJ85 that crashed near Rionegro/Medellín Airport on Nov. 28, killing 71 of the 77 passengers and crew. The IATA report includes only fatalities involving people in the airplane, not those who are killed on the ground.