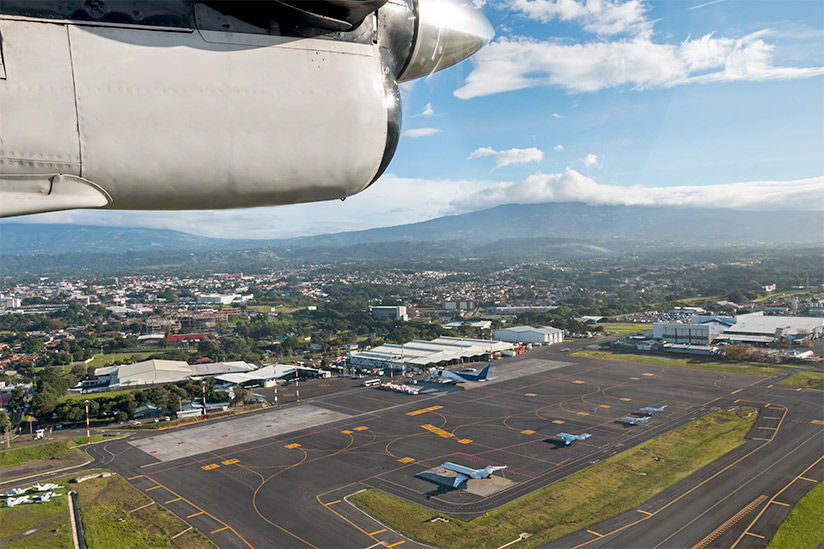 PASO, a flight operational quality assurance (FOQA) information sharing program, has had a demonstrable impact on safety at San José, Costa Rica’s Juan Santamaría International Airport, and supporters would like to see the program expanded geographically and in terms of the type of data that is collected, analyzed and shared, according to interviews by AeroSafety World, International Civil Aviation Organization (ICAO) working papers and other documents.

The project initially was named RASG-PA Project 3, but was later changed to GSI-12 to reflect its alignment with Global Safety Initiative 12 — use of technology to enhance safety — from a then-current version of the ICAO Global Aviation Safety Plan. The project now usually is referred to as PASO.

While PASO had early backing from RASG-PA, as well as from Airbus and ALTA (Latin American and Caribbean Air Transport Association), initial support was not universal, according to Rodrigo Brenes, a former airline captain and now safety manager at ACSA, who — along with Frazier Rodríguez, safety coordinator, state safety program in Costa Rica’s DGAC — recently discussed PASO with ASW. At that first RASG-PA meeting, “we said it was very important for operators to share” flight operations data with regulators, Brenes said. “I remember the reaction from some was ‘over my dead body.’” Early obstacles that had to be overcome included the operators’ mistrust of the DGAC and a lack of motivation among potential stakeholders to participate in the program.3

The fundamental objectives of the ­COCESNA/ACSA-DGAC-operator partnership are to share information among the parties; identify and mitigate operational safety hazards; monitor regional safety trends in aircraft operations; work in a cooperative, collaborative and coordinated fashion in partnership with stakeholders; and develop mutual trust among the stakeholders.4

The flight data used in PASO are de-­identified. A memorandum of understanding (MOU) signed by the initial stakeholders in 2010 provides for nonpunitive reporting and stipulates that safety issues will be resolved through mitigation rather than through punitive or disciplinary actions. Overall, there is an effort to balance the interests of all the participants, according to COCESNA/ACSA documents.5

“We developed an MOU in which the operator we had at that time, the civil aviation authority and ACSA decided we can sit down and start looking at part of that [flight operations] information,” Brenes said. “The two key words here are trust and sharing. We have been working this way little by little. … The state is not seen as a policeman, but as someone you can trust.”

PASO was created not because of one particular event but because the authorities knew the operators were checking the data and learning lessons, and “we thought, ‘why are these guys learning lessons and we are not? And why are they not sharing with us?’” Brenes said. Among the likely reasons was the possibility of punishment or sanction from the DGAC, he said, adding, “We decided that sharing this [information] is more important that giving a punishment.”

As of late 2014, more than two dozen PASO meetings had been conducted to analyze and manage negative trends highlighted by operators participating in the program. According to Rodríguez, PASO meetings initially were held on a monthly basis, but that has been changed to every other month to give stakeholders more time to work on issues that are identified. Also, since 2012, PASO has worked in coordination with Costa Rica’s runway safety team on issues identified at Juan Santamaría International Airport. In turn, the runway safety team has worked with senior management at the DGAC to raise awareness of identified hazards and associated risk mitigation measures, according to working papers presented by COCESNA/ACSA at the ICAO High Level Safety Conference (HLSC) in February and a RASG-PA executive steering committee meeting in March. 6, 7

“Runway safety teams are a valuable partner,” Rodríguez said. “This is part of the sharing. PASO is really a sharing program.”

The working paper presented at the HLSC in Montreal outlined three safety issues that were, or are in the process of being, mitigated at Juan Santamaría. The first issue involved operator concern over the number and severity of traffic-alert and collision avoidance system (TCAS) resolution advisories (RAs) they were experiencing in the terminal area of Juan Santamaría. A number of mitigation measures were proposed, such as restructuring the Juan Santamaría terminal control area (TMA) by creating a visual flight rules corridor for general aviation traffic using the secondary San José airport — Tobías Bolaños International Airport, also known as Pavas International Airport after its location in the Pavas district of San José — and designing a new procedure for circling to land on Juan Santamaría’s Runway 25.8

The results of the mitigation measures were positive, according to COCESNA/ACSA data, which show that the number of RAs declined from 13 in 2009 to four in 2010. The average number of TCAS RAs in the Juan Santamaría TMA has held steady at just under four per year since 2010, and the severity of events has declined as well. Most are now “adjust vertical speed, adjust” RAs.9

In a second example, the analysis of FOQA data for operators participating in PASO showed a large number of takeoffs and landings with excessive tail winds in operations at Juan Santamaría. Working with the runway safety team, PASO compared wind readings communicated from the control tower to flight crews with wind-related data extracted from the on-board aircraft communications addressing and reporting system (ACARS) and operators’ flight data analysis systems. PASO also analyzed anemometer use and maintenance information; the anemometers, radio antennas and other equipment were checked for physical condition, and the civil aviation authority was asked to check that anemometer heights complied with ICAO Annex 3, Meteorological Service for International Air Navigation, Chapter 4.

The analysis showed a high range of error for data from meteorological stations located near the threshold of Juan Santamaría’s Runway 07. These data are used in wind direction and wind speed readings in the control tower. It was also determined, using high-precision global positioning system equipment, that the actual locations of the anemometers did not match the published locations, and that the equipment heights did not comply with Annex 3. As a result, it was recommended that three anemometers — one at each end of the runway, and one at the center — be installed and that the new locations be published.10

In the third example, operators in 2012 reported an issue with flight crews conducting instrument landing system (ILS) approaches to Runway 07. The operators detected a discrepancy between the electronic and visual glide paths when flying near the minimum descent altitude and when the flight crew have visual references and are transitioning to the precision approach path indicators (PAPIs). Crews following the PAPI lights were getting indications to stay above the glide path depicted on the approach  profile view, resulting in situations in which the pilots would tend to pitch down the aircraft to fly the PAPI glide path, increasing vertical speed to 1,000 fpm or greater, possibly resulting in unstabilized approaches and increasing the risk of runway safety events in the form of hard landings, long landings, short landings and runway excursions.

After analyzing the information and performing an analysis, it was determined that the PAPI lights at Juan Santamaría were not calibrated correctly because their calibration had not been included in the contract for radio navigation and calibration services. The contract was amended and the calibration carried out, and since then, there has been a “considerable reduction” of related FOQA events.11

“As a state, we coordinated with COCESNA, which maintains the PAPI lights, and after they were calibrated, the operator saw a lot of improvement in their approaches,” Rodríguez said.

In discussing PASO, Brenes said, “We thought maybe we were going to see a lot of errors on the part of the operators.” Of course, there were errors, he said, but as investigations continued to find the root causes, it was discovered that in some cases, the errors were caused by the state having done or not done something in the past; he pointed specifically to the wind indicators and the PAPI lights as examples. As the regulator and airport worked to correct the issues, “we started gaining that trust” with the operator, said Rodríguez.

Since its inception, PASO has carried out its analysis and management of risks primarily through the use of FOQA data and information, but it has begun obtaining other types of information about safety-related events. “As a result, there is a need for this programme to evolve towards a more comprehensive coverage of events, beyond the scope of those detected through use of technology,” according to a COCESNA/ACSA working paper that suggests voluntary reports from technical personnel also be considered. COCESNA/ACSA also would like to see the program extended to other countries.12

“Through the application of PASO, it has been demonstrated that the joint effort with the industry, authorities and other safety improvement groups, such as airport [runway safety teams] creates a synergy [resulting] in more effective and comprehensive risk mitigation, which … otherwise could not have been achieved by individual efforts.”13

“Some places are resistant to change,” Brenes said. “This new way of thinking means, little by little, we need to change the safety culture. This is one of our dreams, to have more groups like [PASO] in which the civil aviation authority can sit with the operator and share safety information.” 