Unconventional cabin features, such as side-facing seats, on small transport aircraft need exemptions from the FARs. 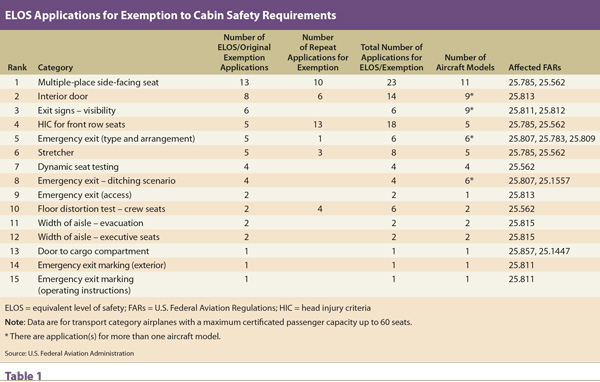 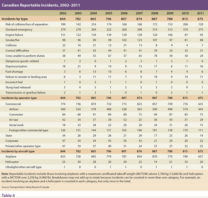 The cabins in smaller transport category aircraft, particularly those used for corporate operations (Table 1), often vary in design from those of conventional airliners. In U.S.-registered aircraft, the cabin fixtures that deviate from the FARs must receive FAA approval.

Two related types of deviations can be permitted from the cabin safety FARs. “ELOS [equivalent level of safety] findings are made when literal compliance with a certification regulation cannot be shown and compensating factors exist which can be shown to provide an equivalent level of safety,” the report says. Alternatively, “an exemption is a petition for a request to the certificating authority by an individual or entity asking for relief from the requirements of a regulation in effect. The authority’s response to the petition is one of the following: granted, partially granted or denied.”

A review of the FAA database found a total of 98 ELOS findings and exemption applications appropriate for the agency’s study. “The applications were classified under 15 categories, and the categories having more than four original applications were given further consideration,” the report says (Table 2).

Exemption applications were classified as original or repeat.3 In all, there were 14 ELOS findings, 38 exemptions granted, 36 exemptions partially granted and 10 requests for exemptions denied.

In number of ELOS and original exemption applications (23), the total number granted and the number of aircraft models affected, “multiple-place side-facing seat” topped the list.

Many corporate jets include seats parallel to the side of the cabin, as distinguished from the theater-type, forward-facing seats in airliners. FARs Part 25.562 and Part 25.785 require that seats that can be occupied during takeoff and landing and their fittings (such as the restraint system) “must be designed so that a person making proper use of those facilities will not suffer serious injury in an emergency landing as a result of [specified] inertia forces.” However, the dynamic forces to which occupants of side-facing seats, especially multiple seat rows, are subject are different from those in forward-facing seats.

“The FAA stated that side-facing seats are considered a novel design for transport category airplanes … which were not considered when this airworthiness requirement was formulated,” the report says. “The FAA produced Issue Paper CI-1, dated Nov. 12, 1997, entitled ‘Dynamic Test Requirements for Side-Facing Divans (Sofas),’ which addressed the injury criteria particular to multiple-place side-facing seats. Transport Canada has also issued a Policy Letter on side-facing seats for Transport Category Airplanes (PL No. 525-003, effective date 1 December 2003), which provides guidelines concerning the application of airworthiness standards required for the approval of side-facing seats.”

Fourteen ELOS findings and exemption applications related to interior doors. FARs Part 25.813 says, “No door may be installed between any passenger seat that is occupiable for takeoff and landing and any passenger emergency exit, such that the door crosses any egress path (including aisles, cross-aisles and passageways).”

The petitions for ELOS findings and exemptions derive from “executive configurations,” with their inclusion of private compartments for meetings, hence extra doors. “The grant or denial of exemption took into consideration the locations of emergency exits in the cabin, the design of the door and the type of operation the aircraft is intended for,” the report says.

Most applications contended that “the difference between the commercial transport category aircraft used in airline operation and aircraft specifically used for corporate operations (whether private or non-scheduled commercial) was not segregated in the FARs Part 25 rules,” the report says. Applicants also argued that corporate fleets using Part 25 aircraft have “grown to a point where it is contended that the certification agencies need to consider new revised design rules for aircraft involved in this class of operation.” However, the FAA has not been concerned whether the aircraft was intended for airline or corporate operation, but whether it was intended for commercial or private use. In granting the exemptions, the FAA required that the aircraft not be operated for hire or common carriage.

The number and rate of aviation accidents for Canadian-registered aircraft decreased in 2011 compared to 2010 and the preceding nine-year period, according to Transportation Safety Board of Canada (TBS) data (Table 3).4 Accidents totaled 230 last year, a 6 percent decrease from 2010. Of those, 192 involved airplanes, 35 helicopters, and three balloons, gliders or gyrocopters.

“The accident rate for Canadian-registered aircraft decreased from the 2010 accident rate of 5.8 accidents per 100,000 flying hours to 5.7,” the report says. “Statistical analysis …indicates a significant downward trend in accident rates over the past 10 years.”

Rates for fatal accidents and fatalities remained unchanged between 2010 and 2011.

Reportable incidents totaled 675, including 573 involving Canadian-registered aircraft.5 In 2011, the most frequent incident types were declared emergency (41 percent), risk of collision or loss of separation (18 percent) and engine failure (14 percent).

The 675 reportable incidents represented a 17 percent decrease from the 815 in 2010 and were the fewest of any year in the preceding nine (Table 4, p. 52). The most notable improvement was in the category “risk of collision/loss of separation,” with 120 such incidents reported in 2011 versus 206 in 2010, a year-to-year decline of 42 percent.