Operators of DJI Matrice 200 drones should be warned of risks of flying in rain, the AAIB says.

The investigations all involved Matrice 200-series drones that crashed while operating in rain. In each case, the drone lost power and flew out of control, “with the aircraft typically falling vertically to the ground,” the AAIB said. 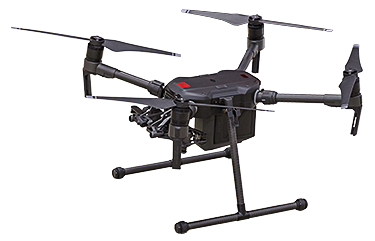 As a result of the investigations, the AAIB said in a January report on one of the events that it was recommending that the U.K. Civil Aviation Authority (CAA) notify users of DJI Matrice 200-series drones “of the possibility of moisture entering the aircraft when operating in rain, and that this could result in a sudden loss of control of the aircraft.”

A second safety recommendation said that the CAA should “specify the conditions that must be met for an unmanned aircraft to be flown safely over people.” Existing regulations do not provide such guidance, the AAIB said, noting that without it, there is a risk of injury to individuals on the ground.

The report that included the recommendations discussed the March 19, 2019, crash of a Matrice 210 that was being flown to record video footage of an outdoor athletic event in Yorkshire. Rain had been falling intermittently, and as it intensified, the operator maneuvered the drone toward its intended landing site, which was located away from the public area.

“The pilot then saw the aircraft ‘wobble’ slightly, and as it neared the landing site, it flipped over before descending rapidly to the ground from a height of about 3 m (10 ft),” the report said. None of the several hundred competitors and spectators on the ground was injured, but the drone’s rotor arms, propellers and camera payload were damaged.

The pilot told accident investigators that he had flown the drone in light rain during three flights earlier in the day and that he also had operated it without problems in light rain several times since buying it in August 2018.

The drone had four propeller motors, each controlled by an electronic speed controller (ESC) located below the motor and equipped with a label designed to change color if exposed to moisture, the report said, adding that moisture can lead to “erroneous operation or failure of electronic components and/or electrical connections.”

DJI says that although most of the ESC chamber is sealed to keep moisture out, the attachment holes and the seam between the antenna case and the lower chamber were not. (The report said that DJI told the AAIB that it was working on a seal for that part of the drone.)

The report said that DJI also had said that it had tested the drones to meet standards intended to prevent any harmful effects from water dripping or spraying into the openings at specified angles or for specified time periods and that it found no problems.

DJI’s user manual and its “disclaimer and safety guidelines” manual both contained a statement that the drone meets the standards of the International Electrotechnical Commission when equipped with specified batteries but that the protection rating “is not permanent and may reduce over time after long-term use.” A second cautionary statement, also included in both manuals, said, “Do not fly when the amount of rainfall exceeds 10 mm/h [10 millimeters per hour].”

However, the report said,  there was no guidance on how to determine whether the protection was adequate, how “long-term use” of the system was defined or how the level of rainfall could be measured.

After the accident, the pilot sent the drone to an authorized dealer, where examination showed that “the No. 3 motor ESC moisture indicator had been activated, and evidence of liquid residue was found on the ESC circuit board,” the report said. Examination of the other ESCs found no evidence of moisture.

The dealer and manufacturer reviewed the recorded onboard data, which they said showed that the accident was a result of a problem in the No. 4 ESC. The drone subsequently was sent to the manufacturer, but the AAIB said it had received no additional information on the cause of the No. 4 ESC problem.

The AAIB said that, although its investigation did not confirm that moisture had caused the crash, other Matrice 200 accidents have been a result of moisture inside the drone.

Manufacturer’s data showed that Matrice 200-series drones were involved in 44 accidents between October 2018 and March 2019. Of the 10 events that were attributed to problems with an ESC, four were related to water damage, the report said. Of the 34 non-ESC accidents, 17 were of undetermined causes and 16 involved the propeller motor, loss of a propeller in flight, incorrectly installed propellers or other propeller damage, the report said.

In analyzing the four events involving ESC water damage, the manufacturer said, “There is the possibility that water seeped in from the closing part of the antenna case. Water ingress will cause the ESC and other components to short circuit, causing complete damage and signal lost (sic), or to send out abnormal signals causing abnormal motor behaviour (sic), which may lead to an incident.”

The AAIB said that 59 drone accidents were reported between February 2015 and July 2019, including 18 accidents involving Matrice 200-series drones. Of the 18 Matrice 200 events, the AAIB attributed 16 to a “technical fault resulting in loss of control of the aircraft,” one to controlled flight into terrain and one to other unspecified causes.

Most of the accidents have involved quadcopters, the agency said, adding that when a motor fails on a quadcopter, the drone is unlikely to be controllable. “The evidence available to the AAIB shows that, in these cases, the [drone] tumbles and falls rapidly to the ground,” the AAIB report said. “Where electrical power has been lost to all motors, the [drone] will free fall to the ground.”

This article is based on “AAIB Report: Safe Overflight of People by Unmanned Aircraft Systems,” AAIB accident report EW/C2019/03/02 and related documents.