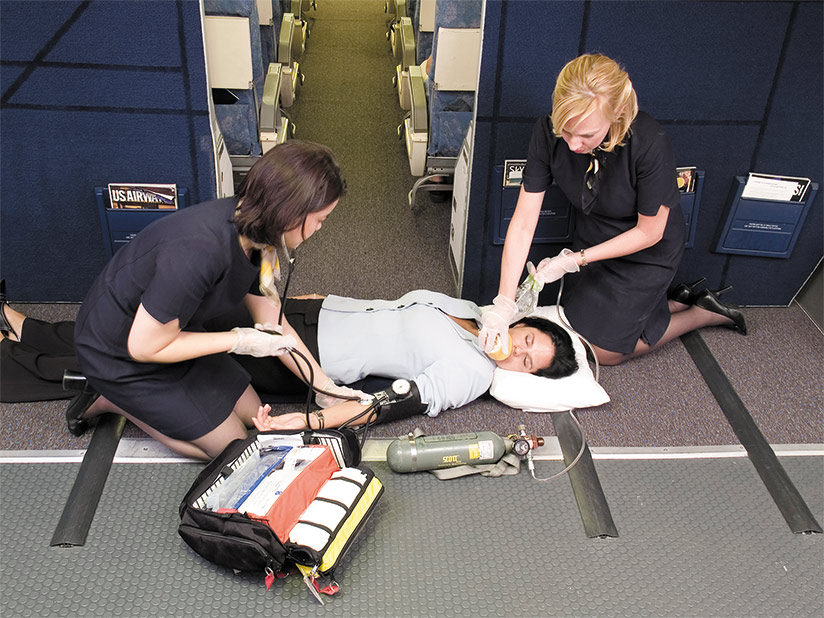 The Aerospace Medical Association (AsMA) has joined three other aviation and medical organizations in recommending items to be included in aircraft medical kits, carried for use in case of in-flight medical emergencies.

AsMA included the recommendations in the third edition of its Medical Guidelines for Airline Travel1 — published in late 2014 and now available as “an online ‘living’ document which can be updated as and when new information becomes available” — and separately, in the June issue of its Aerospace Medicine and Human Performance journal.2

Regulations require airlines to carry first-aid and medical kits, AsMA said, adding that “detailed policies regarding contents of the kits, training of the crew and treatment of passengers are at the discretion of each nation and its airline(s).”

The first-aid kits (Table 1), which should contain items such as bandages, adhesive tape, hand cleanser and thermometers, are intended primarily for use by cabin crewmembers, AsMA said.

“Commercial carriers train their cabin crew to recognize common symptoms of distress and to respond to medical events with first-aid, basic resuscitation techniques and the use of emergency supplemental oxygen,” the organization said.

In case of a more serious medical event, cabin crewmembers are expected to ask for help from medical personnel on the flight and to “release the medical kit to providers with appropriate credentials,” AsMA said (Table 2). Medical kits should contain items such as stethoscopes, syringes, intravenous catheters, surgical masks and umbilical cord clamps, the organization said.

The guidelines noted that many airlines have “greatly increased their capacity for providing in-flight medical care to passengers by enhancing their on-board emergency medical kits … and by adding automated external defibrillators (AEDs) to the existing medical equipment.”

AEDs — portable devices designed to be easy to operate by people with no medical background — can restore a normal heartbeat after sudden cardiac arrest. The devices work by analyzing the heart’s rhythm and, if necessary, delivering an electrical shock to help re-establish normal rhythm.

The recommendations extend to universal precaution kits (Table 3), including such items as germicidal disinfectant and a bio-hazard disposal waste bag, to provide protection against blood-borne pathogens and spills of hazardous liquids.

A related report — also included as a chapter of the Guidelines and published separately in the same issue of the journal — noted that in-flight medical emergencies and deaths are rare, and cited several studies conducted in the past 12 years that say between 0.3 percent and 0.7 percent of in-flight medical emergencies end in death. The report also said that a 2015 analysis of data from 23 major airlines over seven years found 0.07 deaths per 1 billion revenue passenger kilometers.3

More frequently reported medical issues include minor ailments such as near-fainting and hyperventilation and more serious events such as seizures and heart attacks, the report said.

Noting that authors of previous studies have suggested an international standardized recording system for in-flight medical events, the authors of this report said that such a system would be costly, logistically difficult and “unlikely to result in practical benefits.”

They added, “A more practical and cost-effective approach may be for individual state (country) regulatory aviation authorities to consider the topic with the airlines they regulate and ask them to submit in-flight medical event data in an agreed format. Although this would impose some costs on the regulatory authority and on the airlines, reporting systems already exist for safety-related events, and it may be feasible to modify these to record health-related events.” 