NTSB’s analysis of how occupants fared after Asiana Airlines Flight 214 collided with a seawall points to research opportunities. 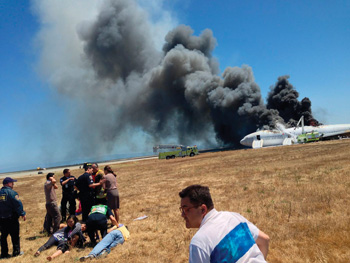 Sensing that the Boeing 777-200ER was about to impact the bay on its final approach to San Francisco International Airport, one of the flight attendants watched the water surface move closer through the window in door L2 (left side, second door from the nose) adjacent to his “A position” jump seat. Suddenly, he yelled for the flight attendant facing him — his “B position” colleague at the same door — to brace for impact. No warning had come from the flight deck.

Several other flight attendants realized, too, that the airplane was traveling or descending too quickly relative to the water surface. Then the airplane pitched up in an odd way, and they felt the first impact, similar to a hard landing, which one of them perceived as being quickly followed by a “crushing sensation.” A seawall in front of the Runway 28L threshold had just sheared away the landing gear, part of the lower fuselage and the tail.

Among these details, the U.S. National Transportation Safety Board’s (NTSB’s) final report on the July 6, 2013, accident also said that the crew of Asiana Airlines Flight 214 perceived the crash sequence and, in some cases, suffered injuries in ways that varied depending on their seat locations (see “Research Directions”) and other factors.

A previous AeroSafety World article (ASW, 10/14) summarized the probable cause and contributing factors in the crash, detailing the sequence of preceding events involving the flight crew. The final report essentially found that — in addition to the aircraft design meeting current U.S. standards for airworthiness and crash survivability (ASW, 4/14) — the evacuation of the airplane and the aircraft rescue and fire fighting (ARFF) response proved to be critical, positive factors enabling the survival of 99 percent of occupants.

The U.S. National Transportation Safety Board’s (NTSB’s) final report on Asiana Airlines Flight 214 called for survival factors–related research into factors that, in some cases, were possibly unique given the unusual dynamic forces and other circumstances.

Video images recorded by airport surveillance cameras helped investigators to document the order of the airplane’s momentary lifting and pivoting motions, then a sliding deceleration — all resulting in complex patterns of injuries or absence of injury. “When the main landing gear and the aft fuselage struck the seawall, the tail of the airplane broke off at the aft pressure bulkhead,” the report said. “The airplane slid along the runway, lifted partially into the air [tilting the airplane into about a 30-degree nose-down angle], spun about 330 degrees, and impacted the ground a final time [coming to rest off the left side of the runway, about 2,400 ft (732 m) from the initial seawall impact point … about 1128:06.26 local time].

“The impact forces, which exceeded certification limits, resulted in the inflation of two slide/rafts within the cabin, injuring and temporarily trapping two flight attendants. Six occupants were ejected from the airplane during the impact sequence: two of the three fatally injured passengers and four of the seriously injured flight attendants. The four flight attendants were wearing their restraints but were ejected due to the destruction of the aft galley where they were seated. The two ejected passengers (one of whom was later rolled over by two firefighting vehicles) were not wearing their seatbelts and would likely have remained in the cabin and survived if they had been wearing their seatbelts.”

Mapping of the crash site (Figure 1) showed that some major airplane components had come to rest between the seawall and the runway numbers, including the vertical stabilizer, the left and right horizontal stabilizers, and left and right main landing gear components. The left engine safely separated as per design specifications and came to rest about 600 ft (183 m) north of the main wreckage on a grassy area right of Runway 28L. The right engine safely separated but came to rest against the right side of the fuselage.

Fuselage, door and slide/raft damage; debilitating injuries of some occupants; passenger entrapment by damaged cabin equipment; the slide/rafts that did not deploy normally because of door sill position or that inflated inside the cabin; and fire and smoke impeded some occupants when the airplane came to a stop about 16 seconds after initial impact. The oil-fed fire began within the right engine pressed against the fuselage and then destroyed sections of the airplane before being suppressed by ARFF personnel. The airplane’s fuel tanks were not breached or involved in the postcrash fire.

The NTSB report contains selected evacuation vignettes and descriptions of occupant ejections. “Based on their injuries, the locations where they were found, and the statements of first responders, the four aft flight attendants were ejected out of the ruptured tail of the airplane during the airplane’s slide down the runway,” the report said.

When the airplane stopped sliding, flight attendant L2A, who had yelled for his colleague to brace for impact, directed passengers to remain seated while he assessed the postcrash situation for less than 93 seconds. He heard the flight attendant assigned to jump seat R2A screaming for help (Figure 2). “Her legs had been pinned against the galley next to her jump seat by the inflated slide/raft, and she could not free them,” the report said. “He went over to her to try to assist but was unsuccessful in freeing her. He saw fire and smoke outside the door 2R window and determined that they needed to evacuate. … He initiated an evacuation [entirely on his own], and 98 percent of the passengers successfully self-evacuated.”

About 20 seconds after the airplane stopped moving, the captain, who was the pilot monitoring (PM), spent one minute and 11 seconds attempting unsuccessfully to obtain the airport tower controller’s assessment of the condition of the airplane, which was temporarily enveloped in dust. The airport tower controller heard these radio transmissions, but, except for the aircraft call sign, they were unintelligible, so the controller repeatedly said only that ARFF vehicles were responding. “When the PM understood emergency vehicles were responding, he read and accomplished the evacuation checklist. … Once the initial steps of the checklist were completed, he issued an evacuation order.” The cabin manager later told investigators that when she heard an unidentified voice (L2A) announce the command “Evacuate!” she opened door 1L and began to direct passengers onto the slide/raft at that door.

The flight attendant assigned to door/jump seat R1 was initially unconscious and trapped in her jump seat by an inflated slide/raft. She was freed by the efforts of her husband (a passenger), the cabin manager and another flight attendant and then was assisted in exiting down the door 1L slide/raft. The legs of flight attendant R2A, who was conscious, remained trapped although she had unfastened her restraint and fallen to the floor.

Only one of the six flight attendants in the rear half of the airplane, who later said she had lost consciousness for a few seconds after impact, was physically able to take part in conducting the evacuation. She was assigned to door/jump seat L3. She told investigators that she had been unable to open door L3 or to command the evacuation of her zone by interphone handset.

A passenger, meanwhile, had opened door 3R and was directing passengers out that door, and from near her jump seat, flight attendant L3 directed evacuating passengers to exit via door 2L and door 3R. The flight attendant responsible for door 3R had been thrown to the floor and seriously injured despite her fastened jump seat restraint, and a passenger helped her exit from her assigned door.

“When all of the ambulatory passengers in her area had evacuated, flight attendant L3 noticed that several passengers were not evacuating,” the report said. “She commanded them to evacuate but realized that some passengers were trapped. She went to the back of the airplane and tried to help extricate them until firefighters arrived, but she was forced to evacuate because of the smoke and difficulty breathing. … As the fire spread into the fuselage, firefighters entered the airplane and extricated five passengers (one of whom later died) who were injured and unable to evacuate. … Once outside, the uninjured flight attendants performed various duties, such as gathering passengers together, attending to injured passengers and crewmembers, and notifying responders that the four flight attendants who had been seated in the aft galley area were missing.”

Eight flight attendants who were able to provide oral or written statements to NTSB investigators described a normal flight and normal performance of their cabin safety duties in preparation for landing. “They reported that they performed their seatbelt compliance checks and that at least two flight attendants (the cabin manager and flight attendant L2A) checked [the aftmost, travel class zone],” the report said.

“The three passengers who sustained fatal injuries were part of a school group traveling from China to the United States to attend summer camp,” the report said, and three surviving students who had been seated near those fatally injured described the circumstances to NTSB investigators. “They reported that their fatally injured friend [occupying seat 41B was] covered by a blanket at the time of landing. They did not know if she was wearing her seatbelt. They also reported that [another] fatally injured friend … was seated in her assigned seat [41E] and was not wearing her seatbelt at the time of landing.”

The students said that they did not know the seating/seatbelt status of the third fatally injured student, but one of them said that a flight attendant (L2A) had come through the cabin for the pre-landing check and specifically had reminded her to fasten her seatbelt. A nearby passenger corroborated that the cabin crew had been especially attentive to the student group before landing and had enforced all cabin safety rules.

One student told interviewers that two of the deceased friends’ seats were empty when the aircraft came to a stop, the report said, noting, “All three students believed that their friends, passengers 41B and 41E, were ejected from the airplane during the impact. … The NTSB concludes that [two of the] passengers … were unrestrained for landing and ejected through the ruptured tail of the airplane at different times during the impact sequence.”

The control tower alerted most ARFF units and other emergency responders at 1128:00, about 10 seconds after the airplane collided with the seawall. Highlights from more comprehensive details in the NTSB’s report include discussion of the response time; the actions taken to rescue the last group of passengers; finding/accounting for deceased passengers and assisting injured flight attendants ejected from the moving aircraft; and fire suppression.

When the first emergency response vehicle, occupied by one airfield security officer, reached the scene, passengers had been coming down the slide/rafts at doors 1L and 2L for about 25 seconds. The San Francisco Fire Department’s first ARFF vehicle arrived at the aircraft at 1131:11 and began to apply foam to the visible fire in the right engine, the report said. The second of seven ARFF vehicles arrived and applied extinguishing agent to the fire about 37 seconds later. “Within about 20 seconds of [the second vehicle’s] arrival, most passengers had finished evacuating from doors 1L and 2L,” the report said.

During the rescue phase of their response, firefighters searched the smoke-hazy cabin, extinguished the interior fire spreading from the right engine and found an estimated four to six passengers unable to self-evacuate — some pinned beneath seats — while a flight attendant and other passengers stayed with them.

Firefighters and airport police officers, who entered through the tail section opening, removed these passengers from the airplane. “At 1138:37, [the first] three firefighters climbed the 2L slide/raft … and entered the cabin,” the report said regarding the elapsed time. “Based on information from multiple sources, it is likely that the last passenger was extricated from the back of the airplane about 1147.” The fire was brought under control at 1218:30 after simultaneous, elevated attacks by two ARFF vehicles equipped for fuselage skin piercing and aerial application of extinguishing agents.