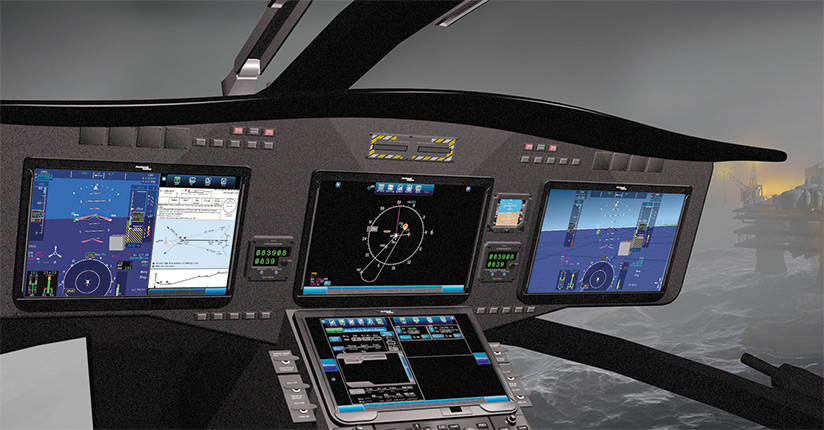 The European Helicopter Safety Team (EHEST) recommended — in a study published by the National Aerospace Laboratory of the Netherlands (NLR), with results released in October 2014 — that the industry should “channel … technological development in line with the results of the study.”1

“Technologies can provide a variety of solutions that can (directly or indirectly) address the safety issues … and that can contribute to prevent different types of accidents or to increase survivability,” the report on the study said. “The main goal of the team is to list technologies and link them with incident/accident causes and contributing factors as identified in the EHSAT analyses.”

Researchers developed a technology matrix — a color-coded tool to aid in determining which technologies can be used to best address specific safety problems.

The study began with an examination of the top 20 safety issues, also known as standard problem statements (SPSs), identified by EHSAT through its analyses of more than 300 European helicopter accidents from 2000 through 2010 (Table 1).

At the top of the list was “pilot judgment and actions–human factors pilot’s decision,” which was cited in 64 occurrences.

The report included descriptions of each of the top 20 SPSs, “so as to give insight into what is included in each one,” and a brief narrative of a typical accident scenario in which the SPS was a major issue, the document said.

For example, the description of “pilot judgment and action–human factors pilot’s decision” acknowledges the importance of human factors and decision making in accident prevention, along with other factors, among them resource management; paying attention to “cues that should have led to termination of current course of action”; adhering to aircraft limitations, rules and procedures; and awareness of personal limitations and capabilities.

The accident scenario for that SPS described what happened as a commercial helicopter pilot flew a passenger “on an air taxi flight to a remote site in an area surrounded by snow-covered, flat, featureless terrain. Low fog, reduced visibility and flat-light conditions reduced his ability to discern a horizon or terrain. The pilot elected to make a precautionary landing to wait for better visibility. After about 10 minutes, he decided to continue flight. After takeoff, flat-light conditions again reduced ability to recognize topographical features on the snow-covered terrain. He reported that in attempting to establish a stable hover, and erroneously believing that the helicopter was not moving, the right skid struck the snow-covered terrain. The helicopter rolled onto its right side.”

Another SPS was “part/system ­failure–aircraft,” which the report said often can be attributed to “inadequate design, manufacturing defects, overstressing, poor maintenance or lack thereof, lubrication starvation or external influences … like lightning strikes or bird strikes.”

The accompanying accident scenario said that during cruise, “the pilot lost control of the helicopter, and an uncontrolled forced landing was made onto the top of a two-story industrial warehouse. The pylon-mounted actuator support assembly had separated from the transmission case. All of the studs showed progressive fatigue cracking from multiple origins.”

A third SPS, identified as “safety management–management,” noted the problems that can arise from a lack of oversight and described the following accident scenario:

Due to a blackout on an offshore platform, it was decided to evacuate a number of persons by means of a SAR [search-and-rescue] flight. The captain of the helicopter did make an assessment, concluded that there was no need to dispatch a SAR flight but decided otherwise. The SAR helicopter used for the evacuation had only four passenger seats for 13 passengers and therefore was inadequately equipped for the mission. During the return flight, the cockpit crew reported engine speed fluctuations and experienced controllability problems and decided to make an emergency landing in the North Sea.

By mid-2014, researchers had identified 145 individual technologies and grouped them into 11 categories (Table 2). These are the categories, with the number of associated technologies in parentheses:  aircraft design (9), avionics (25), crashworthiness (10), data monitoring (8), dynamic system (9), maintenance (7), operational support (2), situational awareness (50), vibrations (4), workload (4) and other (7).

The researchers then reviewed the technology database to determine which technology would be “most advantageous” in confronting each safety issue, scoring each technology, on a scale of 0 to 5, on two rating elements:

The scores for the two rating elements were added together to determine the likelihood that each specific technology would aid in accident prevention. For any specific technology, if the rating for either element was 0, the overall score became 0.

Of the 145 technologies that had been identified when the report was released, 93 (or 64 percent) had been rated, the report said. Of those that were unrated, some were more than eight years old and the TRL was unknown, and others lacked the information to enable a rating, the report said.

After the scores were calculated, a safety matrix tabulation sheet was used to show which technology best addresses a specific safety problem (Figure 1).

The matrix tab sheet also shows the area or areas that would benefit most from a new technology.

“If a new technology is introduced, it is predominantly aimed at a specific problem,” the report said. “By rating this technology against the top SPSs, it could become clear that the technology also can be used to mitigate other (lesser known) safety issues. For instance, a manufacturer has developed a sensor aiming to mitigate visibility/weather-related problems. Through this rating system, other safety issues can come to light that, to a varying degree, could be mitigated by this sensor (e.g., mitigate unsafe flight profiles and aid landing procedures.)”

In addition, the matrix can be used to illustrate which safety issues are not sufficiently addressed by technology, the report said. “Once the matrix is filled with rated technologies, safety issues lacking (technological) mitigation means stand out as a result of the colours used. Once these blanks are identified, manufacturers, research organisations and [the like] can be supported to address these specific safety issues. This could create new incentives and justification to perform research and to develop mitigating technologies.”

Four other technologies also were singled out for their potential to mitigate three or more SPSs each:

The report also combined the rating values with the ranking orders of the SPSs to determine which technologies would be most beneficial to the highest-ranking SPSs.

“Each individual SPS will appear a number of times in various accidents, which number can be expressed as a percentage of the total number of appearances (being 545),” the report explained. “The technologies being the most beneficial to the highest-ranking SPSs should get a higher score than the other ones.”

To determine each individual technology’s score, its rating value was multiplied times the percentage appearance of its SPS — for example, 8 x 0.07, when the rating for an SPS was 8 and that SPS represented 7 percent of appearances — and then the results for that technology across all SPSs were added together.

Another section of the report identified a number of lower-scoring “orange” technologies still being developed that might have an impact on safety in the near future. For example, the report cited “structural health monitoring sensing devices,” “high-frequency vibration monitoring for engines,” “intuitive display to minimize the workload” and “new terrain-following algorithms specific to rotorcraft navigation.”

Three SPSs were not matched with any promising technologies. Those three were safety management–management; regulatory–oversight and regulations; and preconditions, condition of individuals–psycho-behavioural factors. Nevertheless, the report added, “It cannot be ascertained that all potentially relevant technologies are identified. … This means that it cannot be stated that there are no technologies for these issues. Furthermore, not having identified a potential promising technology is not necessarily a negative aspect, as other means of mitigation could very well be possible (or already in place). These mitigations could be found in aspects as regulations, training operations, maintenance, etc.”

Overall, as noted, the study found that the 15 “highly promising” technologies could mitigate 11 of the top 20 safety issues. An additional 50 technologies were classified as “moderately promising.”

Technological advances in the future, and the possibility that additional accident analyses might result in new rankings of safety issues, mean that the matrix tool should be constantly updated, the report said. The document also recommended that the study’s results should be disseminated as widely as possible throughout the helicopter community.

“Then it is up to that community to pick up the challenges to improve safety through the use of technologies,” the report said, adding that the challenge of how the technologies should be used “lies within the industry. …

“The industry is highly recommended to channel their technological development in line with the results of the study. The regulatory side should find ways to improve safety by adopting the technologies. Researchers and universities are encouraged to concentrate their efforts on developing the lacking and low-TRL technologies.”