Ten Million to One 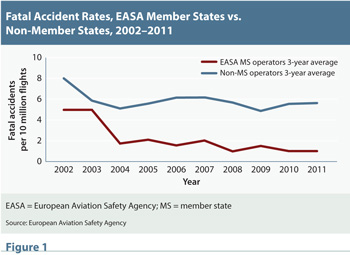 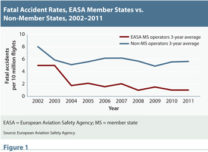 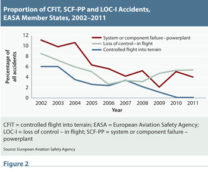 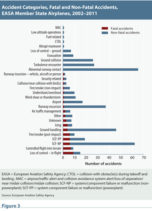 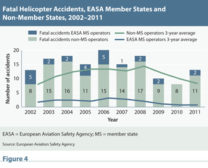 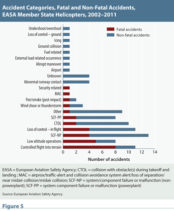 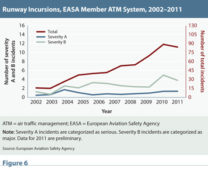 For the decade 2002–2011, there were 1.6 fatal accidents per 10 million flights, the same rate as for North America. As recently as the 2001–2010 period, the EASA MS rate had been 3.3. That was influenced by the exceptionally high rate of 11.7 in 2001. EASA member states are the 27 European Union states plus Iceland, Liechtenstein, Norway and Switzerland.

The trend, based on a three-year moving average, has improved in the most recent 10-year period. The higher rate of non-MS fatal accidents, which in 2002 and 2003 appeared to be converging with that of EASA MS, has maintained a wide gap since.4

Fatal and non-fatal accidents involving EASA MS–operated airplanes were assigned to categories based on the standardized definitions of the Commercial Aviation Safety Team-International Civil Aviation Organization (CAST-ICAO) Common Taxonomy Team (CICTT). Controlled flight into terrain (CFIT) accidents declined as a percentage of all accidents in the 2002–2011 period. “This can be attributed to technological improvements and to increased awareness of situations which may lead to such accidents,” the report says.

Similarly, accidents that involve the failure of a system or component related to the engine (SCF-PP) have decreased as a percentage of all accidents.

Since reaching a low point in 2006, loss of control–in flight (LOC-I) accidents have risen as a percentage of total accidents, and now exceed SCF-PP and CFIT.

Post-impact fire and smoke, and failure of a system or component not related to the engine, were also among leading categories of fatal accidents. Abnormal runway contact was the category involved in the largest number of accidents, none of them fatal.

In contrast with airplanes, CFIT figured prominently in EASA MS helicopter accidents — particularly fatal accidents in 2002 through 2011. Low altitude operations–related accidents (LALT) had the second-highest number of fatal accidents. The report said, “This occurrence category includes accidents which occur while the aircraft is flown intentionally at low altitude, excluding the phases of take-off and landing.”

The largest number of accidents, comprising both fatal and non-fatal accidents, were categorized as SCF-NP, system/component failure or malfunction not related to the engine. That included accidents related to gearbox malfunction, the report says.

Another conspicuous category in helicopter accidents was CTOL, or collision with obstacles during takeoff and landing. The report said that referred to main or tail rotor collisions with objects on the ground.
The annual safety review includes, for the second year, a chapter on air traffic management (ATM). “The sources of the data, as well as the occurrence category definitions, differ from those of other chapters,” the report says. “Instead of CICTT categories, in similar figures of this report, this chapter uses occurrence categories developed specifically for ATM since 2000.”5

In 2011, the largest number of ATM-related accidents was in the category of GCOL, or collision with aircraft moving on the ground and a vehicle, person or obstruction. It also was the most common category for the years 2005–2011, except for “other.”

The overall number of runway incursions reported has increased during 2002–2011 (Figure 6). “The rate of serious incidents (severity A) is, in 2011, at the same level as the previous year after it showed a slight increase over time,” the report says. “The rate of major incidents (severity B) decreased until 2009, but the data for 2010 showed a considerable increase. However, preliminary 2011 data indicate a possible reverse, although at a higher level than 2009.” 